"Homeland's" Damian Lewis: Brody will spin out of control 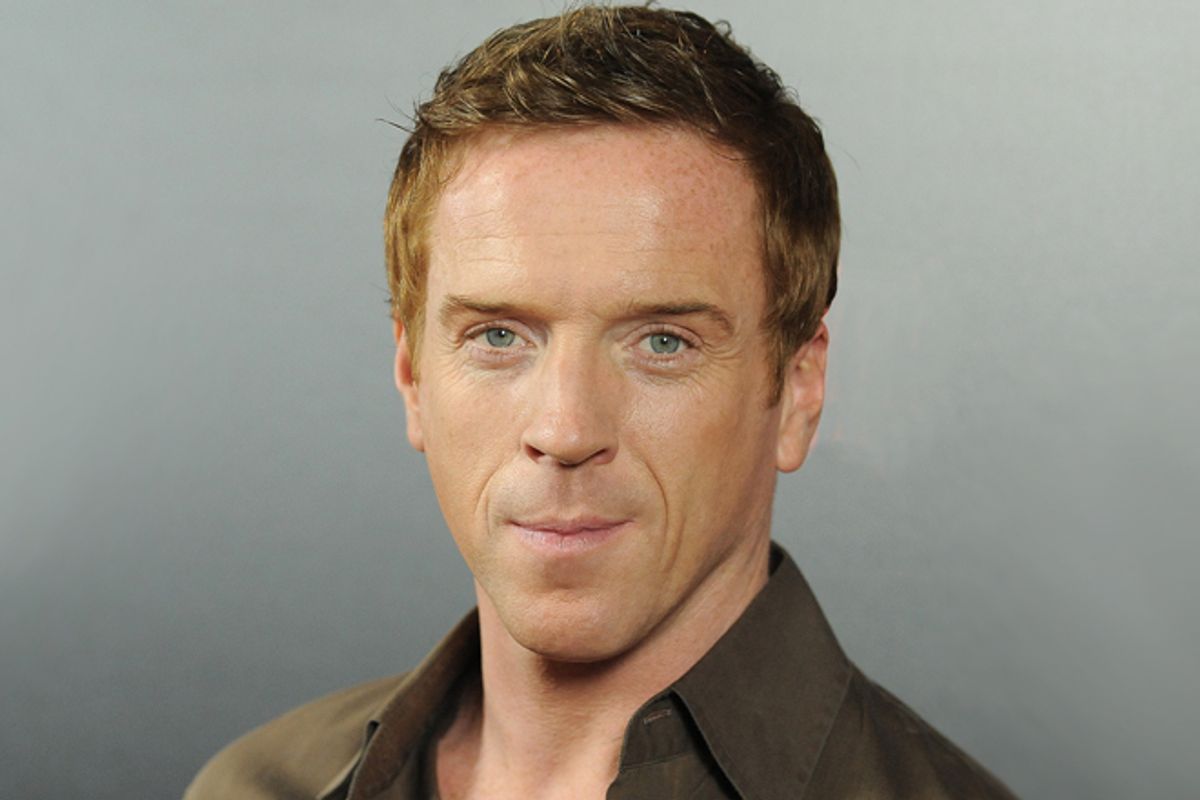 On the occasion of the premiere, I spoke with Damian Lewis, the newly minted Emmy winner who plays Brody. The British actor spoke about what's to come in season two, Brody's predicament and the Brody-Carrie dynamic.

At the end of last season, Brody told Abu Nazir he didn't want to commit violence on his behalf. How committed do you think Brody is to that?

Clearly some form of parting of the ways with Abu Nazir has gone on. In season two, it feels like Brody’s an ex-con. He wants a second chance at life. He is given a second chance at life through the love of his daughter, the daughter who was able to pierce that trancelike bubble he was in, this cocoon he was in. And Brody wants to achieve his political means — political aims — with nonviolent means. That is a parting of the ways from Abu Nazir. That wasn’t the initial mission statement. What’s going on now is Brody is still trying to convince Abu Nazir that there is another way, and that Brody does not want to be caught up in the killing of innocent civilians. It’s a little unclear at this point what he has in mind for Vice President Walden. But I think it’s intended that we believe he is not going to do anything violent toward him. He just needs to insinuate himself, somehow, into American policy and subvert politically from within. And that will cause tension with Abu Nazir down the line.

But even in the first episode of this season, it already seems like Brody is having to walk a line he was hoping to stay away from.

I think that’s exactly what happens in episode one. Brody will realize, as the season progresses, that he really is everybody’s bitch. He is not in control of his own destiny. He’s like the ex-con who’s come out of prison and vowed to go straight, but he won’t be allowed to because his past will catch up to him. And lest we forget, there is the problem of the suicide tape [he recorded at the end of the first season], which is still out there. He doesn’t have that in his possession. So, that’s hanging over his head.

Brody will live in an increasingly heightened state of anxiety, uncertainty and paranoia as he realizes that he is not in control. And that will be problematic for him. Because he has to keep up a very public face now. Because he is now a congressman and he may be on the vice presidential ticket with Walden. So he’s really having to juggle two lives.

Do you think that there is a part of him that wishes Abu Nazir will never call again?

I think there is that, but I think his relationship with Abu Nazir is more complex than that. Brody really ... at the crux of Brody’s problem is that he is an abuse victim. His experience of war led him into contact with a man who is manipulative but who offered Brody some kind of salvation. He offered him great kindness and tenderness, he offered him love, but he was also the man who systematically brutalized Brody and tortured him.

If you reduce that to a more domestic set-up, the way people have abusive relationships with their father or their mother or a teacher, those relationships are extremely complex and not without love while being at the same time extremely damaging. And that’s Brody’s relationship with Nazir. Whenever Nazir comes back and insinuates his way back into Brody’s life, he has extraordinary power over Brody because he remains Brody’s mentor and father figure. Brody loves this man; as screwed up as that is, he loves him. He wants to honor him, where he can.

How grounded do you think Brody is about his allegiances? Do you think he’s thought through his loyalty to Abu Nazir, or is it more instinctual, less logical?

Brody’s not grounded at all. Brody is utterly unstable. Whatever you may feel politically about nation states [and about] governments committing acts of terrorism, if you believe that to be true, the answer surely isn’t to strap on a suicide vest and blow everybody and yourself up. Brody is so unstable, and he makes irrational decisions. These are the decisions and actions of a damaged and victimized man. And Abu Nazir has never really had to complete his conversion of Brody, for want of a better word. Brody doesn’t act as a jihadist warrior in the name of Allah. He never says that; he never does that. He really is acting as a soldier. It’s an act of revenge, and he just does what he thinks is right. This man that he believes committed an evil act just needs to be stopped and needs to be taken out.

There are different ways of doing that. Brody wants to make a big, symbolic political gesture by strapping a suicide vest on. It’s a little deranged. It’s not logical. It lacks logic. He is prepared to do it; remember, he does actually flip that switch. It just doesn’t work. And he is given a second chance at life because his daughter is able to somehow penetrate through the fog, through his pain, through his damage. [She is] able to penetrate in that moment, and she brings him back from the edge. You know, interestingly, there are maybe 30 percent of suicide bombers who fail in their mission to blow themselves up, and it’s always because they can’t leave their children or their family. They are finally ... at the last minute, they are dissuaded from doing it because of love of their families. Again, another reason why I think this show is so brilliant; it’s grounded in truths and reality.

Do you watch the show?

I do watch it. And on this show — I have such faith in it, and frankly I’m working so hard to just keep up my end in it and not let people down— I don’t attempt to watch anything before it comes out on the TV. I quite like sitting down with the rest of the country and watching it week by week.

So you find it entertaining and exciting, even though you are in it?

I’m not going to lie to you, the first time you watch yourself onscreen you just sort of follow your head around and say, "Oh, God, really? I look like that?” Or, “Oh, God, really, I made that choice? That was bad.” Usually you do that once and get that out of the way, and then you can sit down and watch it. Sometimes I come back to things a year later. I don’t sit down and watch an entire series, but I’ll watch an episode a year or two later. Just having that distance, you can really appraise it in a more objective way. And that is quite interesting.

Do you know how this season ends?

I do know, and I don’t think you’ll be disappointed. I hope you won’t be. You know what endings are like. You know what TV audiences are like. God, people are so smart now when it comes to plot, and theme, and character, so it’s hard. It’s hard to keep people guessing and to keep it interesting. But I think as long as this show anchors itself in the complexities of its characters, I think it will continue to be brilliant, and interesting, and painful to watch. If it allows the plot train to get away down the tracks too far, then we’ll end up being something that is just plot driven and, at least in my view, less interesting.

Do you think Brody and Carrie are in love?

Brody suffers from PTSD. Carrie has a bipolar condition. These guys are both damaged people. They have clinical conditions, which manifest themselves in the same way, in many sorts of different behavioral ways. These two also have both been in a war zone. They’re like two broken-winged birds sort of hobbling and circling around each other. And they both are destructive for each other. Carrie should not be sleeping with the potential enemy, and Brody should not be sleeping with the one person who he knows could really humble him and who’s clearly more intuitive than everybody else. It’s sort of a madness. And actually, it’s testament to the writing that it is at all plausible because it is kind of ridiculous as a premise. But Claire is so enjoyable and so brilliant and nuanced at what she does that somehow we’ve made it credible.

And I think the reason it’s credible is you keep reminding yourself of how damaged they are. There is a recognition between these two that she struggles to find with any other man. And Brody, when he returns to his family, struggles to reconnect with Jessica because they’ve had two very different experiences. With Carrie, there is that recognition. And I think it’s a brilliant conceit — as much of a stretch as it might seem — it’s a brilliant conceit to have the romantic or emotional constantly subverting and getting in the way of what they are both trying to achieve professionally. So they are each other’s worst enemy. And they have this extraordinary magnetism they feel between each other at the same time, and so they can’t keep their hands of each other. To me, you find in season two that it’s not just about rock-and-roll sexual encounters, swinging from the chandeliers. It’s a real need; there is a real tenderness that develops, at times. Will they be happy together? Can they be together, these two? Or, you know, is Brody going to get shot?

I’ve always thought it was so amazingly twisted that Brody is the only person in the world who knows Carrie is not crazy, but he’s been the one to sort of gaslight her.

He had to. It’s self-preservation. He had to convince her that she was nuts and that she needed therapy in order to get her off his back. But we kill the things we love. You know, that is part and parcel of this relationship.