From Clint to "Won't Back Down" to "October Baby": A recent history of embarrassing right-wing culture moments 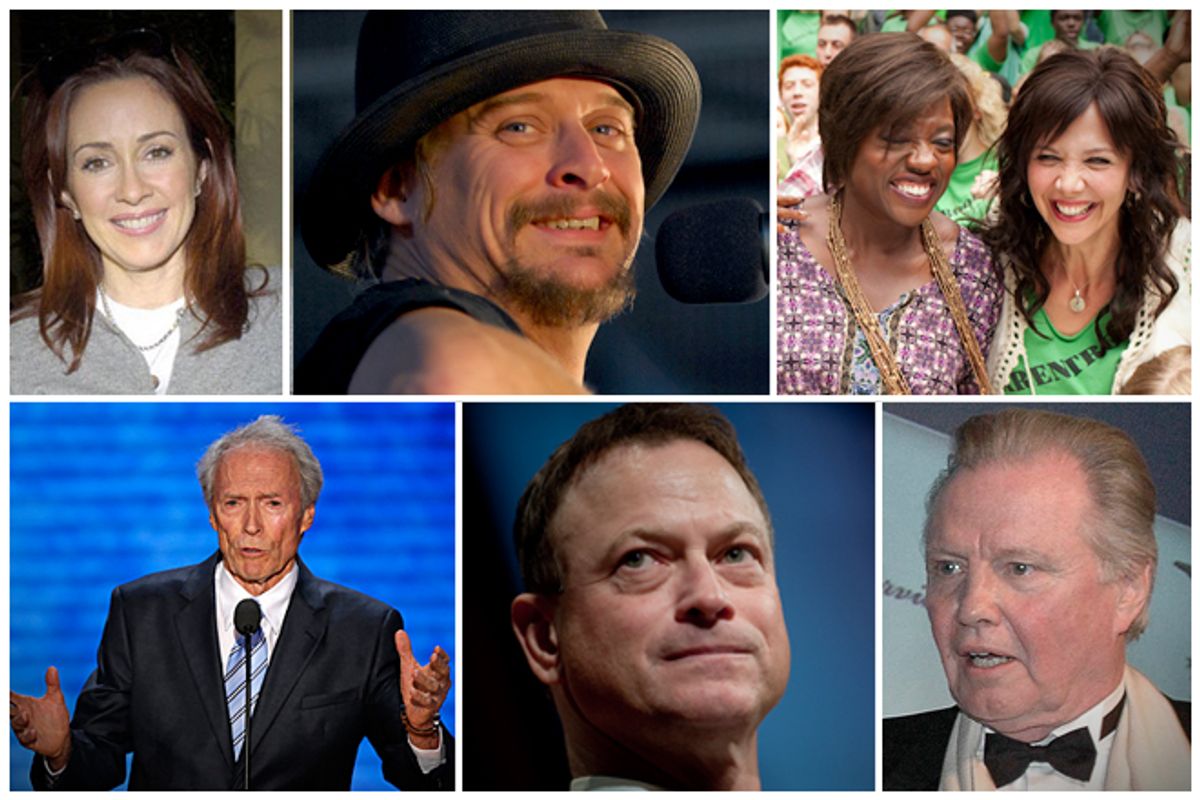 As the anti-union inspirational drama “Won’t Back Down,” Dinesh D’Souza’s deeply crazy Obama conspiracy-theory documentary “2016” and the Clint Eastwood fiasco at the Republican National Convention suggest, conservatives have a problem with pop culture. They don’t much like it or trust it, and the feeling is mutual; every time the two try to dance, the results are embarrassing to all. This becomes painfully clear every time a Republican candidate holds a fundraiser in Hollywood, which has of course been a bottomless source of money for Barack Obama and every other significant Democrat on the national stage, going back at least as far as Adlai Stevenson.

Last weekend Mitt Romney’s campaign held just such an event in Beverly Hills, and most of the names on the guest list were downright depressing: A few aging producers like action-movie impresario Jerry Bruckheimer and 1970s game-show pioneer Burt Sugarman; a few showbiz relics like Pat Boone and Connie Stevens. Almost the only contemporary and recognizable figures were Patricia Heaton (you know! Debra from “Everybody Loves Raymond”!) and “CSI: NY” star Gary Sinise, quite likely the only Republican who has ever directed a Sam Shepard play. Indeed, Sinise is so beloved by the lonely cadre of culturally savvy right-wingers – they do exist! – that former George W. Bush and John McCain aide Nicolle Wallace floated a rumor in 2009 that he might run for president. (Given the way things look for Romney right now, I bet a lot of Republicans would love to go back in time and work a little harder on that.)

You can slice this particular cultural phenomenon any number of ways: Depending on your perspective, Hollywood is either a bastion of progressive, independent thinkers or a hotbed of America-haters, socialists and sexual deviants. Viewed more neutrally, it’s probably fair to say that the creative classes in every modern society have skewed leftward, and that the reasons for that are deeply encoded in history. When power belonged to the king, the church and the generals, and was devoted to enforcing obedience, conformity and bourgeois family life, you could hardly expect the poets and actors – what with their absinthe and their opium and their complicated sexual affairs – to play along.

I bring up that historical background because it helps explain why Sinise’s presence at a Romney fundraiser strikes many of us as weird, and also why conservative attempts to engage in the pop-culture wars often seem so fatally lame. It’s almost more a question of affect or tone or presentation than it is of substance. Conservative-oriented, family-friendly movies like “Won’t Back Down” or the hit antiabortion drama from last year, “October Baby” – only the most prominent example in a recent wave of Christian-themed, social media-promoted films – are made cheap and fast, without the slick, professional cinematography and editing of most Hollywood productions. Watching them, you feel a vague time-warp effect, as if you had stumbled on a 1997 made-for-Lifetime production while channel-surfing.

Along with the relative artlessness and the technical weakness comes an overwhelming sense of sentimentality and sincerity, the almost uncomfortable feeling that the movie is coming at you heart in hand, saying exactly what it wants to say, and shamelessly urging you to share in the exaggerated emotions of its characters: The righteous struggle to improve your dyslexic daughter’s failing school, or the shocking revelation that a teenage girl’s health problems result from her birth as an “abortion survivor.” This ultra-direct approach very likely appeals to the core audiences for these movies, which is to say people who rarely go to Hollywood films or watch mainstream TV drama. But to practiced and indoctrinated media consumers, these movies lack the veneer of worldly sophistication we expect even from middling films and TV shows, the edge of professional detachment, the note – to use the most overused word of the last 20 years – of irony.

It’s as if the producers and directors of these movies never got the memo about how culture in the digital age is supposed to look and feel – and they probably didn’t. (I’m not necessarily endorsing the sleek, knowing manner of nearly all entertainment aimed at an educated adult audience, but we’re all pretty used to it.) Whether this is a deliberate strategy I couldn’t say, but in the case of “Won’t Back Down,” which positions itself as a “Stand and Deliver”-type inspirational tale about inner-city education before dropping some deep wisdom on the evils of teachers’ unions, the answer is probably no. But if you think I’m exaggerating or manufacturing this tendency, I double-dare you – no, triple-dare you! – to watch “An American Carol,” the anti-Michael Moore spoof from 2008 and the most notorious of all conservative efforts to engage in waggery, ribaldry and high jinks.

If you haven’t heard about this movie, you should – it’s the one in which anti-American filmmaker Michael Malone (Kevin Farley), after accepting the Leni Riefenstahl Award from Paris Hilton for his documentary “Die, You American Pigs,” receives “Christmas Carol”-style visits from George Patton, George Washington and country music star Trace Adkins, who shows him a future in which Los Angeles is occupied by Islamists and Michigan has been nuked by al-Qaida. And it’s every bit as good as that sounds! Despite a highly professional cast and director (comedy veteran David Zucker), “An American Carol” is simultaneously amateurish, ugly and profoundly unhinged, with an angry, paranoid edge that virtually oozes off the screen. Compared to that movie, the mawkish, in-your-face earnestness of “October Baby” feels like a restrained masterwork of the early French New Wave.

“An American Carol” was one of the biggest conservative efforts to engage mainstream moviegoers directly, relentlessly pumped on the air by the likes of Rush Limbaugh, Sean Hannity and Glenn Beck. It was also a massive flop, earning back only about one-third of its $20 million budget. That may explain why “Won’t Back Down” is being Potemkin-marketed as a nonpartisan drama that embraces all points of view, built around the likable duo of Maggie Gyllenhaal and Viola Davis. They are both, of course, highly professional actresses with long careers on stage and screen, all the sophistication and credibility you could ask for. (Neither, I’m pretty sure, is personally conservative.)

Yet their movie is still itchy and off, with background extras standing around uncomfortably in scene after scene amid the general feeling that this imaginary vision of Pittsburgh was teleported in from another decade or another dimension. Which leads me to change my mind: The message is the problem after all. If Gary Sinise were running for president, he’d no longer be that cool guy from the Chicago theater world who does somber crime-lab dude so well on TV. He’d probably be looking and acting a lot like that other guy, the one who’s wandering around the heartland telling old ladies and autoworkers why they should pay more taxes than he does.