Free speech and the "clash of civilizations"

We have no problem with sometimes limiting hateful speech -- except, it seems, when Islam is the target 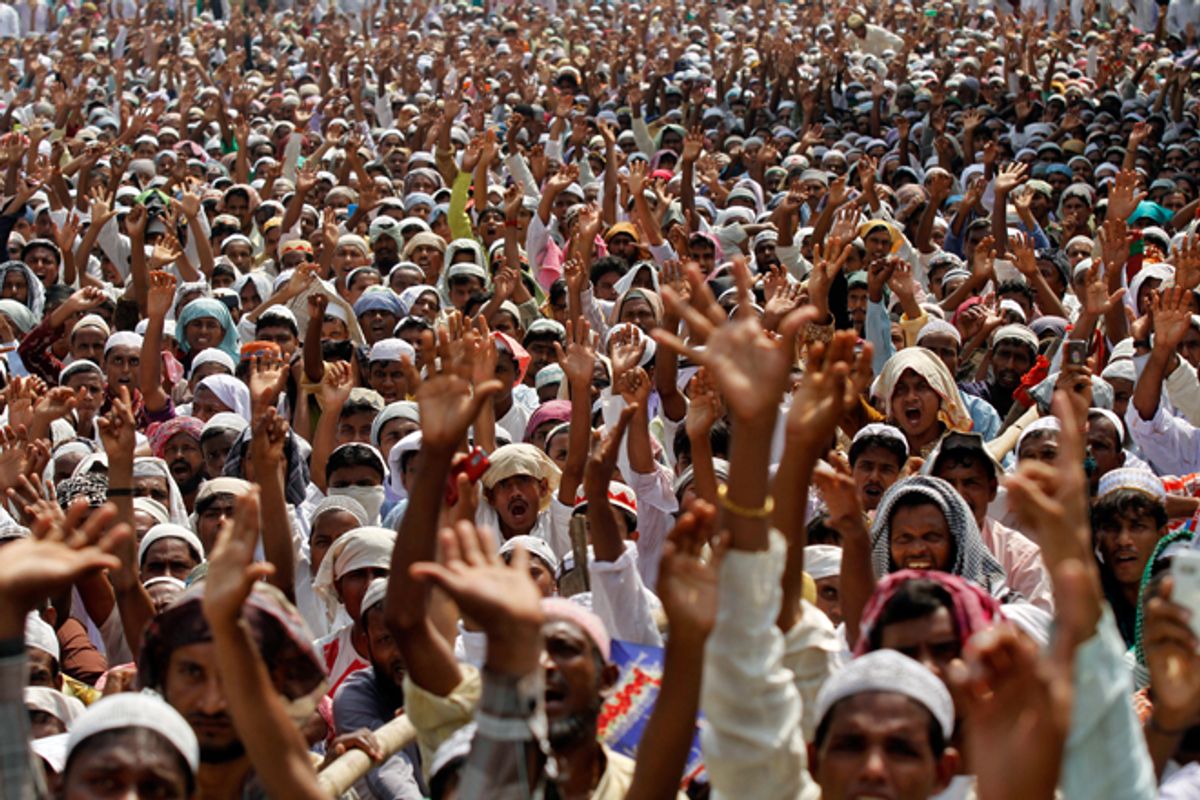 Muslim demonstrators shout anti-U.S slogans during a protest against a film they consider blasphemous to Islam. (Reuters/Rupak De Chowdhuri)
--

Three hurtful words, scrawled in black circles under the eyes of a ballplayer named Yunel Escobar: Tu ere[s] maricón.  The message, conveyed in the eyeblack of the Toronto Blue Jays shortstop during a recent game, means, "You’re a faggot."  That’s hate language, and reaction was swift and stern.  Major league baseball launched an investigation, the Blue Jays suspended Escobar for three games and enrolled him in “sensitivity training,” and he gave the obligatory apology in front of the microphones. Few if anyone publicly complained that, hurtful or not, homophobic or not, Escobar’s free speech rights trumped the concerns of others wounded by his words.  No one said Escobar should be able to continue displaying the slur.

“Given the reaction of the offended community, Escobar’s punishment was absolutely justifiable and necessary to maintain order in society,” wrote Stacie Brown on PolicyMic.  In other words, the community came together and shut Escobar up, due to a collective sense of mutual respect for the rights of others not to be hurt by hateful speech.  Society has forged standards of respect and unacceptability about racial, ethnic, anti-Semitic and homophobic slurs.  Rightly or wrongly, the message is:  Use certain hateful words in public, and you’ll pay the price.  So why is there a different set of values at work when it comes to the hurt caused Muslims by hateful, Islamophobic characterizations of the Prophet Mohammed, or denigrations of Islam?

“The Innocence of Muslims” is only the latest attack on the prophet designed to provoke and therefore reinforce the image of Muslims as the Other, unworthy of the support and empathy of civilized peoples.  “The obvious, outward motive of such attempts is … to show Muslims as irrational, violent, intolerant and barbaric, all of which are attributes profoundly inscribed into the racist anti-Muslim discourse in the West,” writes the Egyptian journalist Hani Shukrallah, editor of Al Ahram Online.

But whether the provocation is the “Innocence” trailer, which depicts Mohammed as a pedophile and “murderous thug”; Danish cartoons, including one depicting Mohammed with a bomb in his turban;  a Florida Quran-burning; or images of naked women with verses of the Quran scrawled across their bodies, in a film whose director liked to call Muslims “goat-fuckers,” the defense centers on free speech.

“Americans have fought and died around the globe to protect the right of all people to express their views, even views that we profoundly disagree with,” President Obama pointed out at the United Nations last week, in the continuing wake of the “Innocence” furor. “We do not do so because we support hateful speech, but because our founders understood that without such protections, the capacity of each individual to express their own views and practice their own faith may be threatened.”

Instinctively, as a journalist, I’ve always been close to a free-speech absolutist.  After all, if we start banning things, where do we draw the line?

But there are two problems with blanket free-speech protections in these cases:  One, such universal protections don’t exist in the first place.  Laws on the books already prohibit certain hateful and provocative speech.  In Germany, it’s against the law to deny the Holocaust.   Here in the States, try advocating assassination, running an explosives seminar, defending the 9/11 attacks, or even making a charitable donation to the wrong group in the wrong conflict zone, and see how far you get.  Some of these restrictions emanate from the USA Patriot Act, but others have been in place for decades.  Justice Oliver Wendell Holmes, writing for a unanimous U.S. Supreme Court in 1919, argued that “the most stringent protection of free speech would not protect a man in falsely shouting fire in a theater and causing a panic.”  As Sarah Chayes points out in an L.A. Times Op-Ed titled “Free Speech or Incitement?,” “The Innocence of Muslims” was provocative by design, and therefore may fit U.S. case law that prohibits “specifically advocating violence.”  She quotes Anthony Lewis, former New York Times columnist and eloquent free speech champion: “If the result was violence, and violence was intended, then it meets the standard” for a criminal act.

The second problem in the blanket free speech defense is its unequal application to Muslims and Arabs.  “I come from a land, from a faraway place, where the caravan camels roam,” went the Disney film “Alladin’s" opening song, “where they cut off your ear if they don‘t like your face. It‘s barbaric, but hey, it‘s home.”  Is there any other group in America for whom this kind of slur would not be roundly condemned, its offenders forced to apologize before being sent into the corner like Yunel Escobar?

There is little in the public conversation that seeks to understand and explain the hurt caused to Muslims by these slurs.  “To mock, to denigrate, to make fun of, somebody who’s deep … [in] the hearts of the Muslims? Really?” asked Sheikh Hamza Yusuf at a packed forum at Zaytuna College, a new Muslim college in Berkeley, Calif., in the aftermath of the “Innocence” furor.  (I was the forum’s moderator.) Yusuf argued that religious denigration should be seen in the same light as racial slurs, where “there are consequences. You will lose your job!  We don’t accept racial denigration anymore. I think religious denigration has to be seen as identity.”

Islamophobia, and the accompanying hating on Arabs, helps provide cover for exceptional denigration. At the Zaytuna forum, Hatem Bazian, a co-founder of the college, described “an Islamophobic production industry that is dedicated to demeaning, to speaking ill of Muslims and attempting to silence Muslims from civil discourse.” This “othering” simply does not spur the same kind of outrage as slurs on blacks, gays, Jews, Asians or Latinos. In Hollywood especially, from “Raiders of the Lost Ark” to “Don’t Mess With the Zohan,” Arabs and Muslims are the last fair game for attacks with impunity.  Jack Shaheen, director of “Reel Bad Arabs,” cites a  “dangerously consistent pattern of hateful Arab stereotypes.  All aspects of our culture project the Arab as villain. That is a given.” The attacks on Arabs and Muslims come with free speech arguments that often don’t apply for other groups.

“Western states and media,” wrote Mustafa Malik in the San Francisco Chronicle, “have waived the free-speech principles … in case of Holocaust denials, racial slurs, advocacy of terrorism and other expressions that could endanger Western social order or national security.  But they have persistently refused to prevent the vilification of Islam.”

Such vilifications, obviously, do not justify mayhem by the weak and besieged already enraged at the West – be it the murderers of the Dutch director Theo Van Gogh, or the rioters who, post-"Innocence," have claimed the lives of dozens of people, perhaps including Chris Stevens, the U.S. ambassador to Libya.  (The Libyan attacks may have been premeditated, and the video only a pretext.)

But it’s time to have a conversation about whether the free speech rights are being applied evenly, and whether speech that leads to murder deserves to be protected.  Simply saying “there’s nothing we can do” will only perpetuate the pattern.  This will leave the ground clear for extremists from both sides, who, ironically, need each other to join the battle in their perceived fateful clash of civilizations.