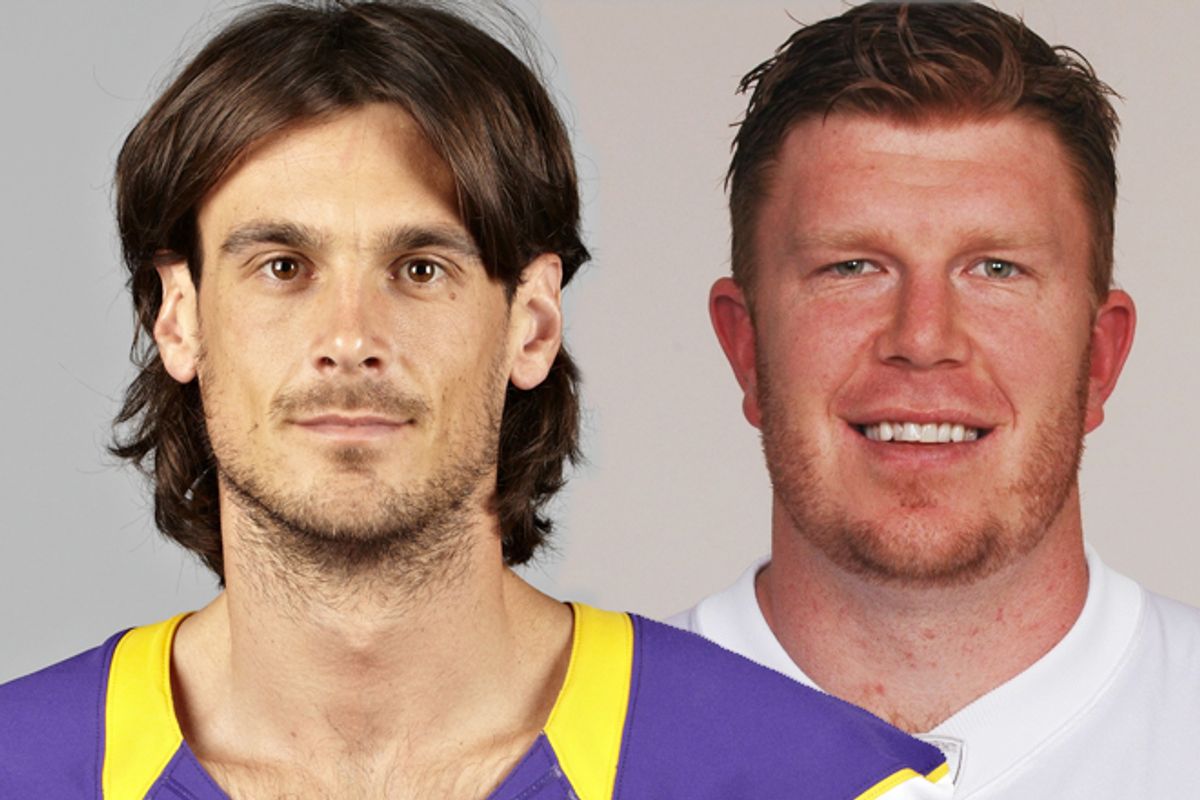 Just in case the NFL's righteously vocal Brendon Ayanbadejo and Chris Kluwe were making you think that the macho world of professional sports is getting a little too tolerant of gay and lesbian rights, don't worry, Ravens center (and former Minnesota Viking) Matt Birk has a few words to even things out.

In a YouTube video for the Minnesota Catholic Conference and an Op-Ed for the Star Tribune this week, Birk takes a strong stance for his home state's Marriage Protection Amendment, and to his credit, attempts to frame the argument in respectful, reasonable terms. An acknowledgment that gays are people may not seem like a big deal, but coming from a guy who's speaking on behalf of a religion whose leader recently called homosexuality "a concept of human nature that has proven defective," it's something.

Birk opens the video by saying that, "Supporting the basic rights of children and the authentic rights of people with same-sex attraction are not mutually exclusive." He argues against the idea that by sticking to "the natural definition of marriage we are somehow being mean or bullies." The father of six goes on to explain, as opponents of same-sex marriage inevitably do, that this is about the children. "No child should be intentionally deprived of knowing their mother and father," he says, declaring his opposition to "genderless marriage." In his Star Tribune piece, he speaks frankly of "people who are simply acknowledging the basic reality of marriage between one man and one woman."

Birk is undoubtedly working from as generous a moral template as his belief system affords. In his statements, you can see him reaching for some kind of neutral ground that's tolerant, if not accommodating. He's a smart guy, and probably a nice one. The problem is that he's making the mistake religious conservatism so often does — taking belief as truth. There is no "natural" definition of marriage, no "basic reality" of it. It's a human-made institution, and as such, we humans get to decide what it is. The Bible is riddled with examples of marriage between owners and slaves, rapists and victims, family members, and multiple partners. So can we please stop pretending that perfect man-on-woman matrimony is the only thing that's ever existed since the dawn of time? If our culture has reached a point where we're evolved enough to understand that two men or two women have as good a shot at making a loving lifetime bond as two members of the opposite sex, isn't that progress?

Furthermore, Birk trots out the argument that marriage is first and foremost procreative, an ideal that ignores every non-reproductive union and assumes, based on absolutely nothing, that a man and woman are inherently better equipped to raise a child than any other combination of parents. He's certainly got a point that "the effects of no-fault divorce, adultery, and the nonchalant attitude toward marriage by some have done great harm to this sacred institution," but I think blame for that falls far more on Kim Kardashian than Neil Patrick Harris.

Birk may never be swayed — certainly not by those of us in the liberal media. Fortunately, the ever-entertaining Chris Kluwe, who knows how to craft a response, offered his own rebuttal to Birk on Monday. In his now-familiar, colorful manner, Kluwe reminds Birk, "You can't just say, 'Same -sex marriage is bad for kids because I think it's bad for kids, and I think it's bad for kids because it's bad for kids.' That's called circular reasoning and it's a logical fallacy." He continues, "Marriage used to be a lot of things, many of them oppressive towards women and minorities." For the coup de grace, he explains, "The First Amendment isn’t just about the freedom FOR religion, it’s also about the freedom FROM religion. The word 'marriage' appears in thousands of legal documents and laws in this nation, and to attempt to narrowly define it through a religious application means you're trying to assert a religious viewpoint on those who may not necessarily hold the same views." Read the whole thing, because it's great, and then let's write a petition for these two to get a TV show together.

That a reasonable, respectful conversation is playing out in public by two guys who aren't running for office, who simply believe in something strongly enough to discuss it, is an example of freedom of speech at its very best. Many of us may argue that Birk's views don't hold water, but credit to him for getting in the ring and expressing them in a way that attempts to be explanatory without being derogatory. And credit to Kluwe for continuing to participate in the debate, for using his considerable logic and humor to try, if not to persuade him, then at least appreciate the other side of the argument. Birk says, "Marriage is definitively worth fighting for." And on that point at least, both men agree.