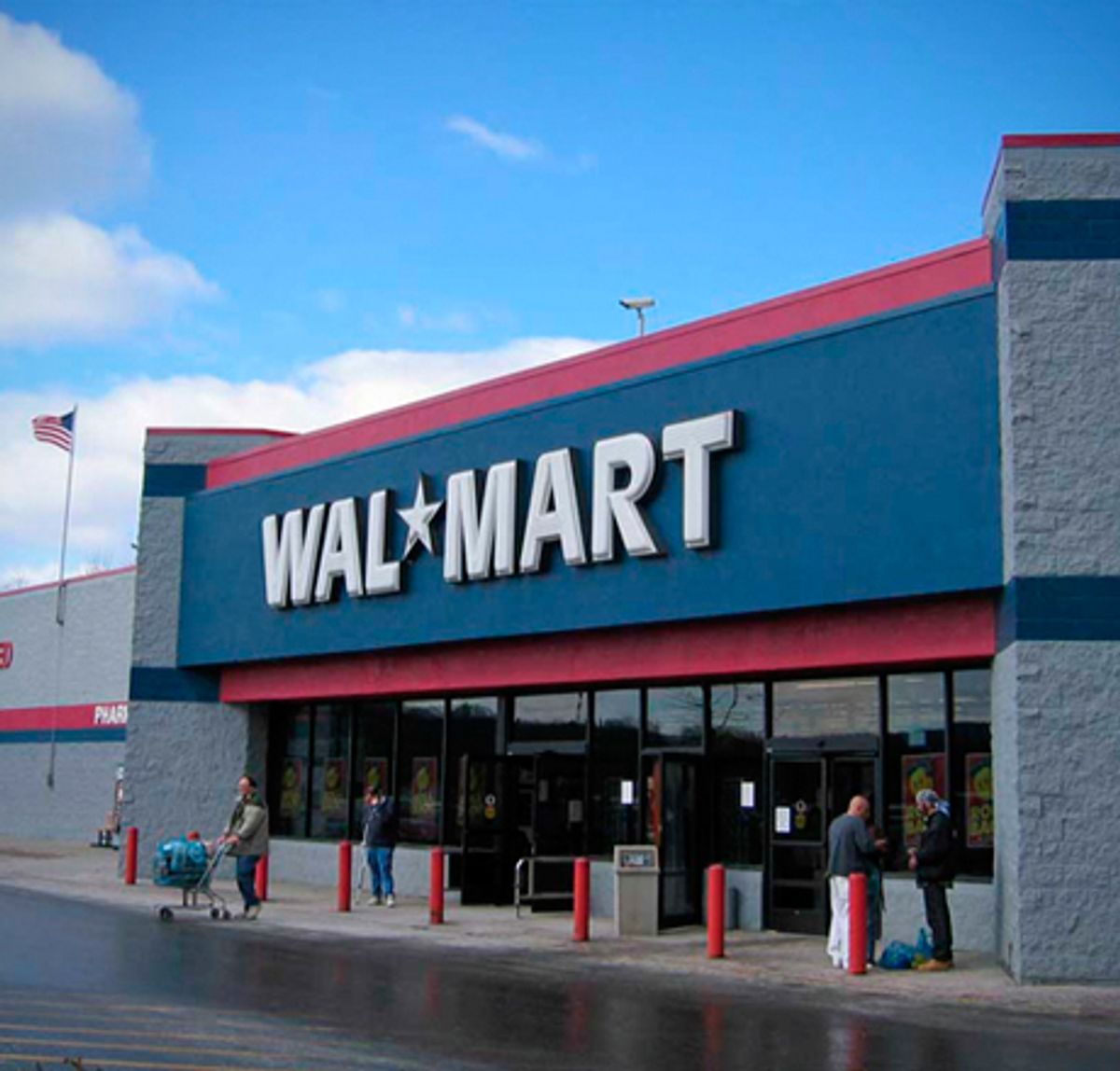 Today, for the first time in Wal-Mart’s 50-year history, workers at multiple stores are out on strike. Minutes ago, dozens of workers at Southern California stores launched a one-day work stoppage in protest of alleged retaliation against their attempts to organize. In a few hours, they’ll join supporters for a mass rally outside a Pico Rivera, Calif., store. This is the latest – and most dramatic – of the recent escalations in the decades-long struggle between organized labor and the largest private employer in the world.

“I’m excited, I’m nervous, I’m scared…” Pico Rivera Wal-Mart employee Evelin Cruz told Salon yesterday about her decision to join today’s strike. “But I think the time has come, so they take notice that these associates are tired of all the issues in the stores, all the management retaliating against you.” Rivera, a department manager, said her store is chronically understaffed: “They expect the work to be done, without having the people to do the job.”

Wal-Mart is entirely union-free in North America, and has worked aggressively to stay that way. Today’s strike is an outgrowth of a year of organizing by OUR Walmart, an organization of Wal-Mart workers. OUR Walmart is backed by the United Food and Commercial Workers union, but hasn’t sought union recognition from Wal-Mart; its members have campaigned for improvements in their local stores and converged at Wal-Mart’s annual shareholder meeting.

They say their efforts have won some modest improvements, but also inspired a wave of illegal retaliation by the retail giant, which they charge is more concerned with suppressing activism than complying with the law. I reported in July on three workers’ allegations that Wal-Mart retaliated against them for their activism. Since then, OUR Walmart has filed many more Unfair Labor Practice (ULP) charges with the National Labor Relations Board, alleging further punishment of activists.

Interviewed yesterday about OUR Walmart, Wal-Mart spokesperson Dan Fogleman emphasized the group’s funding from unions, which he charged “are focused on their own agenda … getting more members to join their unions. That gives them more revenue to help fund the political agendas that they have.” He suggested that today’s rally might have been organized as a stunt to impress visiting leaders from the UNI global union federation, who are currently visiting Los Angeles to launch a global Wal-Mart labor alliance. Fogleman denied the allegations of retaliation: “Unfair Labor Practice charges are similar to lawsuits. Anyone can file them, regardless of whether it’s a valid claim or not. We disagree with those assertions.”

The strikers are taking a risk. With certain exceptions, courts have found that U.S. law prohibits disciplining non-union workers who go on strike in an effort to improve their working conditions. “The bottom line,” former NLRB Chairwoman Wilma Liebman said yesterday, “is non-union people, as well as unionized people, have a right to concertedly walk off the job in protest.” Whether employers can legally permanently replace striking workers (effectively terminating them) depends on whether a strike is ruled to have been in protest of Unfair Labor Practices, and whether the workers offered to come back before the company had hired replacements. But Wal-Mart strikers said yesterday that they expect the company will seek ways to punish them anyway. Already, photo department worker Victoria Martinez said yesterday, “Every time I go into work, I get panic attacks … I’m always wondering what are they going to try to do to me when I come in.”

Interviewed yesterday, University of California labor historian Nelson Lichtenstein predicted that in the event of a Wal-Mart employee strike, public relations would play a bigger role in restricting Wal-Mart’s response than any legal restrictions. If a work stoppage mustered “a substantial number of the workers” in a store, he said, then “a tougher response would be a PR disaster.”

Lichtenstein, the author of "The Retail Revolution: How Wal-Mart Created a Brave New World of Business," said that if workers at one Wal-Mart store went on strike indefinitely, “they’d just close the store, period. And it would be open with a whole new workforce in a week or two. And then it would be litigated for the next three years …” On the other hand, he said, “If every month or so, the workers at a Wal-Mart store walked out, like a three-hour walkout, and then they went back in, that would have tremendous impact.” Brief walk-outs have happened at U.S. Wal-Mart stores in the past, but they’ve never involved multiple stores.

That sets today’s strike apart. But it’s only the latest in a series of strikes in the Wal-Mart supply chain, all by non-union workers. As I’ve reported, eight guest workers at C.J.’s seafood in Louisiana walked off the job in June, alleging violent threats and forced labor. After initially saying it had investigated the workers’ claims and couldn’t substantiate them, Wal-Mart suspended C.J.’s.

Then, the second week of September, warehouse workers who move Wal-Mart goods went on strike in Mira Loma, Calif., and – three days later – in Elwood, Ill. Both groups of workers -- about 65 total -- alleged that management had retaliated against employees for protesting abusive conditions. The West Coast warehouse workers struck for 15 days, and joined a 50-mile march to Los Angeles, before returning to work Sept. 28. Their Midwest counterparts are still on strike. On Monday, they were joined by supporters – and police in riot gear -- for a 600-person rally at which 17 people were arrested for nonviolently blocking the entrance to the major Wal-Mart distribution hub.

On paper, the warehouse workers work for Wal-Mart’s contractors, not for Wal-Mart. Company spokesperson Fogleman said that the striking warehouse workers are raising “issues directly with their employers, and not with Wal-Mart.” He said that Wal-Mart is implementing new procedures for monitoring compliance by its suppliers, and added that in inspections, “the observations that have been made at facilities in California and Illinois are that the working conditions are more than satisfactory.”

But in a summer report, the National Employment Law Project argued that the cost-cutting Wal-Mart requires of its contractors makes abuse inevitable. “Wal-Mart controls its supply chain, but it has no legal responsibility,” said Lichtenstein. “That’s what’s brilliant about it.”

Cruz said she believes the warehouse workers’ strikes are “what really led us to do something.” At a Monday panel in New York, OUR Walmart members expressed full-throated solidarity with the striking warehouse workers. “We see what’s happening to them as part of the same process, of the lowering of standards, that’s happening to us,” said grocery worker Mary Pat Tifft.

The striking store workers make up just a tiny percentage of Wal-Mart’s 1.6 million U.S. employees. But their strike, and those of their contracted counterparts, signal a new stage in Wal-Mart’s labor wars. They also come as the company faces new challenges on other fronts, including a congressional investigation of its Mexican bribery scandal and the failure of its latest bid to breach New York City limits.

Southern California has been a focal point for Wal-Mart worker activism, but it isn’t the only one. Two weeks ago, OUR Walmart members in Dallas held a hundred-person rally protesting Wal-Mart’s wages and benefits. And interviewed on Monday, Kenosha, Wis., OUR Walmart activist Jackie Gable told Salon that “as in the warehouses … safety issues at the stores, health issues at the stores, are getting to a critical level.” Gable, a prominent OUR Walmart activist, added that she now believes “we have enough of a voice, and enough of a presence” that strikes have become “an option that we could use in stores, if we had to.”

So could the Wal-Mart strike spread further? “I think it will,” said Cruz. “I hope it will.”