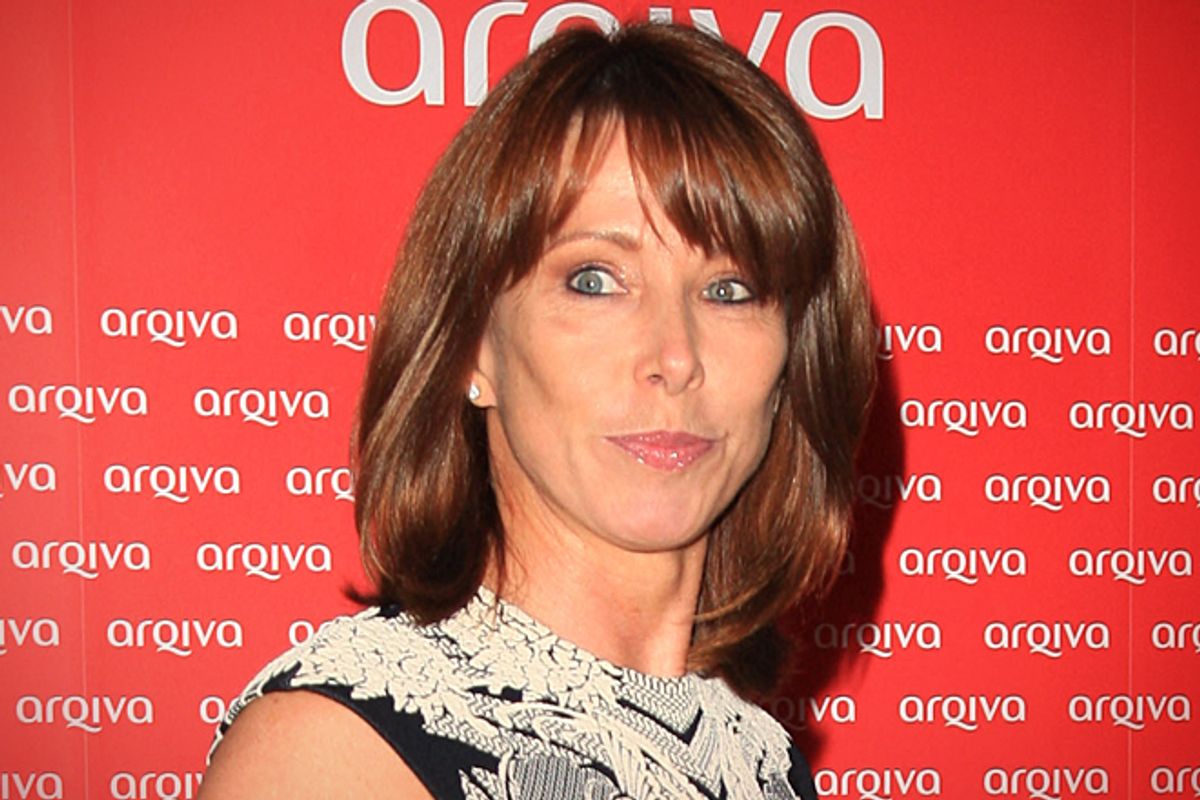 It's a truth universally acknowledged that if it bleeds it leads. And there's no more shamelessly attention-getting, bleeding news story for reporters to pounce upon than one involving a missing child. It's one of our darkest, most horrible, sickening nightmares — and the one that keeps hacks like Nancy Grace in business. But on Friday, a British reporter crossed the threshold from merely telling the story to becoming part of it — in a horrendous display of how callous and exploitative a journalist can get.

On Monday, 5-year-old April Jones was abducted from a street near her home in Machynlleth, Wales. Friday, police arrested Mark Bridger, 46, on suspicion of her murder, while adding with restrained hope, "No stone is being left unturned" in the search for her. Dyfed-Powys Police Detective Superintendent Reg Bevan confirmed that Jones' parents had been informed of the development in a case the family earlier said had "shattered" it.

It was a devastating announcement, one that came, as such an announcement should, from the law enforcement involved in the case. But after the news of the arrest on Friday morning, Sky News reporter Kay Burley took it upon herself to approach the volunteers still searching for the little girl and ask for their reaction. In the clip of what transpired next, a woman named Donna has already received the news and is openly shaken and sobbing. Another volunteer arrives and asks, "What happened? What happened?" You can see Burley pause as she ponders how to handle the question. She says, "OK, I didn't know you hadn't heard. They [the police] don't expect to find her alive. I'm sorry to have to tell you in circumstances like this … would you like to say anything?"

As the woman who'd already known of the arrest clasps her hands to her mouth and sobs, the other volunteer stoically replies, "If they haven't found her, there's a chance. Where there's hope there's a chance. She'll be all right. We'll find her."

Burley then presses on. "What do you think will happen now?" she demands, as the two insist they'll "keep searching day and night until we find her." She then asks, "How are you feeling?" to which they reply, unsurprisingly, "Numb." And then, for the finale, she says, "I'm going to let you go and compose yourselves. If you want to talk to us later, we're here. Look after yourselves, OK?"

Reaction to Burley's handling of the situation has been swift and outraged. Labor Party Deputy Chair Tom Watson called it "insensitive bordering on cruel." He posed the question: "Is breaking news so important that you have to forget your humanity?" Her Wikipedia page was vandalized: Someone wrote she "also works part-time as Death." And the satirical News Thump called her "the most hateful sociopath in journalism."

This is not the first time Burley has been accused of going too far. In 2008, she asked the wife of accused serial killer Steve Wright, "Do you think if you'd had a better sex life he wouldn't have done this?" The same year, she was photographed putting her hand around a photographer's throat outside a courthouse. Two years ago, viewers called for her dismissal after she "aggressively" interviewed political campaigner David Babbs, telling him and fellow protesters, "You marching down past Westminster today will make no difference whatsoever … Why don't you just go home? Why don't you go home and watch it on Sky News?" She's also drawn fire for driving singer Peter Andre to tears during an interview in which she goaded him about his ex-wife and her new husband. So it's not as if she had a whole lot of good will to spare going into the events of Friday.

In all of the horror at how Burley handled the situation, though, it's worthwhile to ponder what a better journalist might have done differently in the same shoes. After all, you can't have a news show without interviewing the locals affected by the story. What is the right thing to do, on live TV, when a reporter who has terrible information is approached by someone who asks, "What happened?" Remember, the reporter has all of one second to decide. If there's any slack to be cut here, it's that Burley's instinct — to deliver the news — may have, at that moment, kicked in. She answered the question. A Sky spokesman told the Daily Mail, "It is clear from the full clip that Kay did not start the interview with the intention of breaking the sad development to them."

Where Burley fails on several different fronts as both a journalist and a human, however, is how she went about it. "They don't expect to find her alive" is a cold, brutal statement to make to someone who obviously cares enough about the child to go looking for her. And to follow it up with a suggestion to your subjects to go pull themselves together and then come back if they feel they want somebody to talk to — in front the entire nation — is flat-out mind-boggling. She was, in that moment, bringing unnecessary pain and drama to an already painful, dramatic situation. She was being ghoulish. She might have, at that moment, instead said, "I didn't know you hadn't heard … I'll leave you two to talk in private," and moved away from the scene. It wouldn't have been difficult. It would have granted a bit of privacy — and a measure of grace — to a terrible day. Instead, she and Sky made a snap decision, one that drives so much of news, to sniff out pain and present it on the air. To commit, as George Monocot called it, "the worst kind of television news reporting: cruel & pointless."