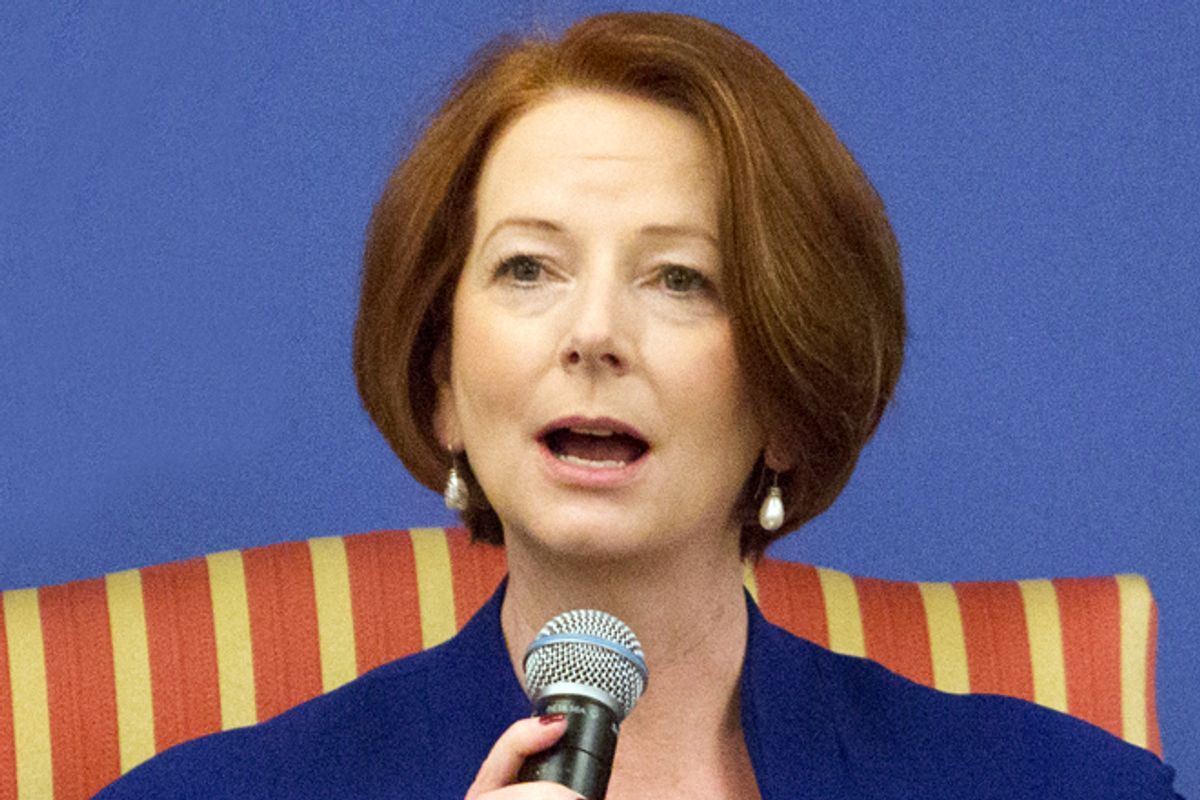 This is why we can't have nice things, people. Sure, Australian Prime Minister Julia Gillard may be calling her recent Facebook question and answer session with her constituents a "success," but when you're dealing with humans who have access to Facebook, remember that success is a very relative term.

Gillard had taken to Facebook on Monday to discuss her education policies in real time, the first event of its kind for the Australian government. But if you've ever spent five minutes on the Internet — and in particular if you're a woman — you can guess what happened next. The 51-year-old leader was called a "slut." She was asked, "Are your pubes as radiant, shiny and glorious as mine?" She was invited to "McPiss off you red-headed bloody McClown." She was told, "Get my dinner ready." And, because online animosity toward Gillard has been particularly nasty since Sydney radio personality Alan Jones declared last month that her recently deceased father had "died of shame … to think that he had a daughter who told lies every time she stood for Parliament," she was also asked, "How's your dad?" Say what you will about the Internet's robust sexist, troglodyte population, at least they're predictable.

The egalitarian nature of social media makes it a natural dwelling place for massive displays of trollishness. Ever read the replies to any politician's Twitter stream? The spelling alone will make you despair for humanity. Have you seen Barack Obama's Instagram feed? It doubles as a window into the racist underbelly of American idiocy.

Yet social media is also a perfect venue for uniquely candid, meaningful dialogue — when that dialogue is allowed to bloom. In August, Barack Obama did a similar open online conversation, but he shrewdly took to Reddit, where  meaningful yet tough questions about corruption and the war in Afghanistan could rise to the top and stupidity could get voted down. That's why it's heartening that Gillard's Facebook page was scrupulously moderated, with abusive comments scrubbed as they appeared — because open discussion doesn't look like a bathroom wall. And it's a testament to the passion Australians feel about the topic of education that so many sincere comments about funding and reform were able to push through the noise.

It's not only possible for politicians to have intelligent conversations online, it's, at this stage of our social development, necessary. But we are a long, long way from the day when a woman, even one who's a world leader, isn't denigrated and smeared whenever she ventures into the fray. The bullies and creeps will put her down with demands and sexual innuendo, in their sorry attempts to silence her. And as hard and dispiriting as these ugly displays are, they're a reminder why we have to keep talking. And in a prime minister's conversation about education, they turned out to be the toughest but most teachable moment.