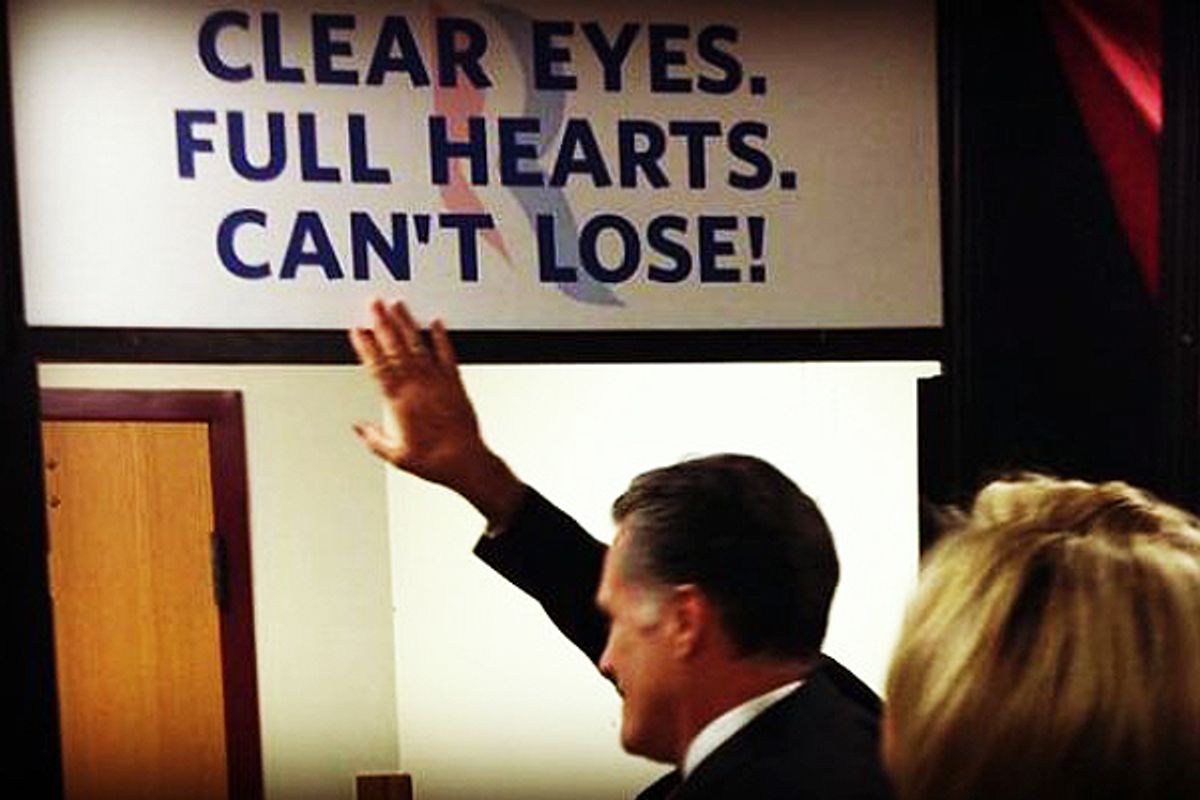 Mitt Romney has recently taken to using “Friday Night Lights'” super-uplifting slogan “Clear eyes, full hearts, can't lose” on the campaign trail. (To be fair, Obama has used it too, though not to the same extent.) According to the AP, before the debate, Romney’s staffers tacked the slogan on the wall, and on his way out to the podium, Romney touched it, just like the Dillon Panthers used to do. And then, you know, pulled off a big upset, just like the Dillon Panthers used to do. I can admit that if President Obama was using “Clear Eyes, full hearts, can’t lose” as if he was Matt Saracen I would find this adorable, but I’m glad that Romney has shown me the error of my ways. No party should get to co-opt “Friday Night Lights” for political purposes. Some things are sacred.

“Friday Night Lights” is the most genuinely bipartisan piece of art American mass culture has produced in the last decade. It’s a Texas-set ode to the importance, integrity and strength of the hetero-normative family and community do-it-yourself-ism that’s also a paean to public schools and public servants and the safety nets they provide for the young and underprivileged. Coach Eric Taylor is a great man, but who could say if he votes Republican or Democrat? Depending on your political persuasion it’s possible to read “FNL” as a “red” or “blue” series — to extract the message you want out of it, to ascribe your preferences to its characters — but not because it is one or the other. Rather, it is truly both red and blue, deeply respectful of all of its characters, however one imagines they would vote.

Because of “Friday Night Lights'” readability, it feels almost inevitable that political campaigns would try to co-opt it. (Buzz Bissinger, who wrote the book “Friday Night Lights” on which the show is based, endorsed Romney after the debate, which may have encouraged the Romney campaign’s slogan use in recent days, even though the “Clear eyes” motto is a creation of the TV show.) As James Poniewozik put it in a column the other day, the show is “a love letter to American character and community so powerful that I’m surprised today’s campaigns don’t use it all the time.” And so now an authentically bipartisan show is being used by political parties who have to ignore one of the most contextually radical things about it, which is that it was a series about America, where — as in the real America — not everyone believed the same thing. “Friday Night Lights” went out of its way to portray all viewpoints sympathetically, and it is now being used to champion just one. Coach Taylor would not approve.

To make matters worse, the faster “Clear eyes, full hearts, can't lose” becomes a political slogan, the faster it will be leached of all eloquence. (Nothing ruins something quite like becoming part of a stump speech: The Clintons' “Don’t Stop” is still the only Fleetwood Mac song other than “Oh Daddy” I can’t bear to hear.) “Friday Night Lights” stopped using “Clear eyes, full hearts, can't lose” regularly in its later seasons, as if it knew overuse would make it cheesy. Anything as perfect and simple-sounding as this motto is always in danger of becoming a cliché, but there’s nothing like putting it in the mouths of politicians to speed up that process.