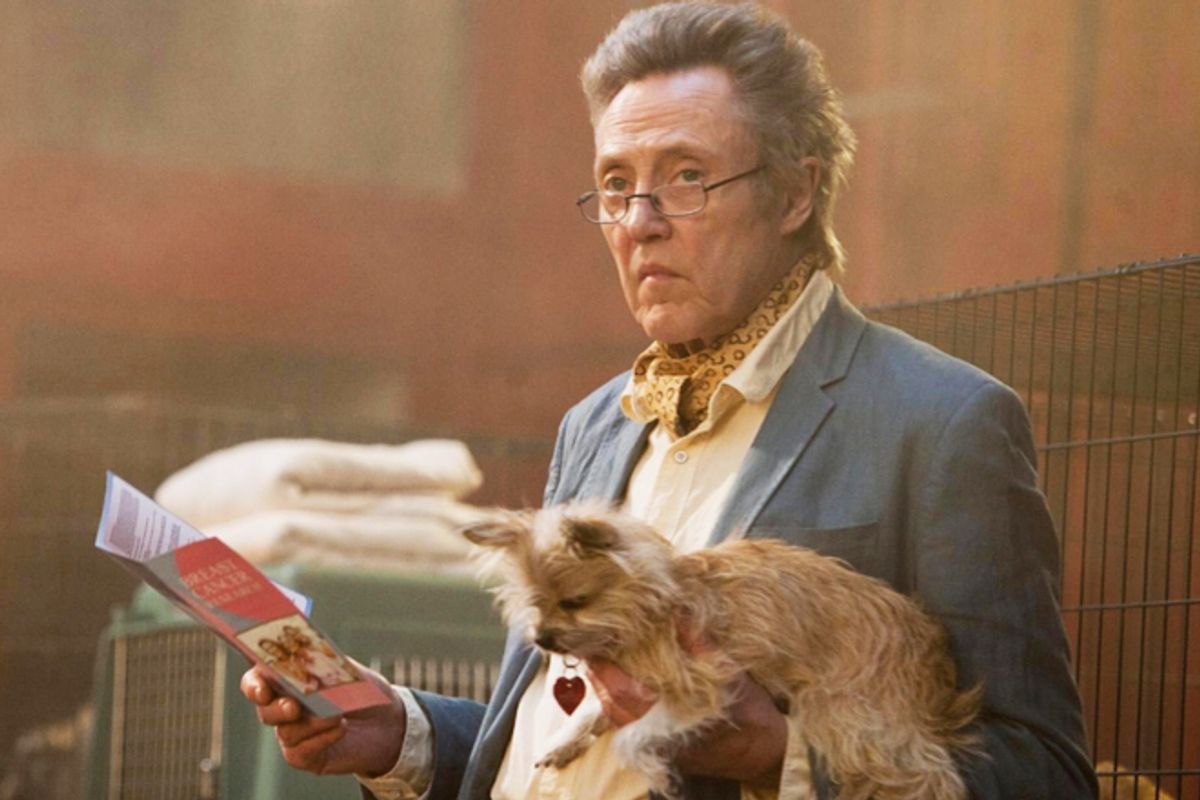 I have contradictory things to say about playwright turned filmmaker Martin McDonagh’s “Seven Psychopaths,” which is pretty much in the spirit of the whole thing, since this movie is constantly rewriting itself and puncturing its own balloon. On one hand, McDonagh’s move into the American mainstream, and his follow-up to the Oscar-nominated international hit “In Bruges,” is admirably ambitious and brushes close to greatness at times. Both a movie about the movies and an L.A. crime thriller in the postmodern Tarantino tradition (forgive me for that phrase, if you can), “Seven Psychopaths” is loaded with scabrous, funny McDonagh dialogue and arguably overloaded with offbeat performances by terrific character actors: Colin Farrell, Sam Rockwell, Christopher Walken, Woody Harrelson and a little shih tzu named Bonny.

But having seen the movie and quite enjoyed it, I can’t shake the feeling that I wish “Seven Psychopaths” were something more than it is, or, to be more precise, were a different kind of thing altogether. Already one of the most accomplished contemporary dramatists (his acclaimed plays include “The Beauty Queen of Leenane” and “The Pillowman”), McDonagh has taken on the movies with a passion, and here appears to be pursuing a Great White Whale I’m not sure is worth harpooning. This is a comic fable about an Irishman in Hollywood, written and directed by an Irishman who has evidently spent a good deal of time in Hollywood. (Although McDonagh was born and raised in England, he has always identified as an Irish writer.) It’s a self-regarding screenplay about screenwriting, more than a little bit influenced by Charlie Kaufman’s “Adaptation,” and it’s an attempt to create a classic American crime film and also to subvert the clichés of that genre to other purposes. Personally, I’m receptive to all those things, but “Seven Psychopaths” winds up getting snarled in its competing and overlapping agendas and falling over.

Like “In Bruges,” this film veers from grotesque violence to tender, even understated emotion, and conceals a level of apparently genuine spiritual or religious questioning beneath its purposefully ludicrous surface. Marty Faranan (Farrell), the nominal protagonist of “Seven Psychopaths,” is an Irish writer in L.A. struggling with worsening alcoholism, a failing relationship and an idea for a big new movie that hasn’t gotten much further than the title: “Seven Psychopaths.” While Marty’s a more intelligent guy than the lunkhead London-Irish gangster Farrell played in “In Bruges,” that admittedly isn’t saying much, and he’s suffering from a similarly half-baked moral and existential crisis. Marty keeps telling his deadbeat best friend, Billy (Rockwell), that he wants to write a “Buddhist” thriller, one that would end not in violence but with the characters in the wilderness talking things out. That’s a gag, of course, and Billy scoffs at him – “Why don’t you call your movie ‘Seven Lesbians’?” – but to some extent McDonagh has written that kind of movie, alongside the more conventional one that ends in death and bloodshed.

You may have noticed that I’ve gotten almost halfway through this review without even mentioning the story of the seven so-called psychopaths, which either Marty is writing or the world is writing around him, or something. That’s because plot is a superficial element in this film, and in McDonagh’s work overall; it’s a tool he uses to pull the audience along to the things that really interest him, which are language, colorful anecdote and moral paradox, more or less in that order. One of the film’s central gags is that Marty is the supposed sophisticate writing about crime and depravity who has no understanding of the genuine craziness around him, including the fact that Billy and his dapper, elderly pal Hans (Walken) are a pair of lowlife con men who kidnap dogs and then sell them back to their owners for the reward money. When they take possession of the aforementioned shih tzu, who belongs to a hot-tempered mob boss named Charlie (Harrelson, heavily tattooed and covered in bling), the cycle of violent retribution required of this kind of movie can swing into action.

That’s without even getting into the story of a reformed murderer who is followed into the depths of hell by a vengeful Quaker dad (played by Harry Dean Stanton), or the even more outlandish tale of a former Viet Cong guerrilla turned Catholic priest (and/or Buddhist monk) who comes to America to wreak vengeance on our nation, reverse-Rambo-style. It’s impossible not to admire the layer-cake complexity and prodigious imagination at work in “Seven Psychopaths,” but for me it’s also impossible to avoid the sense that McDonagh is fighting against himself every step of the way and that the point of the whole exercise is elusive. He’s too smart and too tormented to write a straightforward crime farce, and at the same time he's desperate to bring the laughs and the action, and avoid the art-house ghetto. It's too many masters to serve, and I have the feeling that "Seven Psychopaths" won't be fully satisfying to anybody.

Mind you, the film has moments of real brilliance and pathos; flawed as it is, "Seven Psychopaths" isn’t like anything else you’ll see this year, or any other. For me the strongest elements don't derive from all the lurid meta-narrative detail but Christopher Walken and Sam Rockwell, who infuse a pair of essentially pathetic losers with surprising dignity and humanity. If Rockwell’s Billy seems, at first, like an over-the-top dumbass, Walken gives one of the most restrained, mysterious and thoroughly magnificent performances of his long career as the brokenhearted, cravat-wearing Hans. In this thoroughgoing indictment of the corrosive, carnivorous nature of writing, these guys are willing to die on behalf of a movie that might offer the transcendence they yearn for. Or might not.