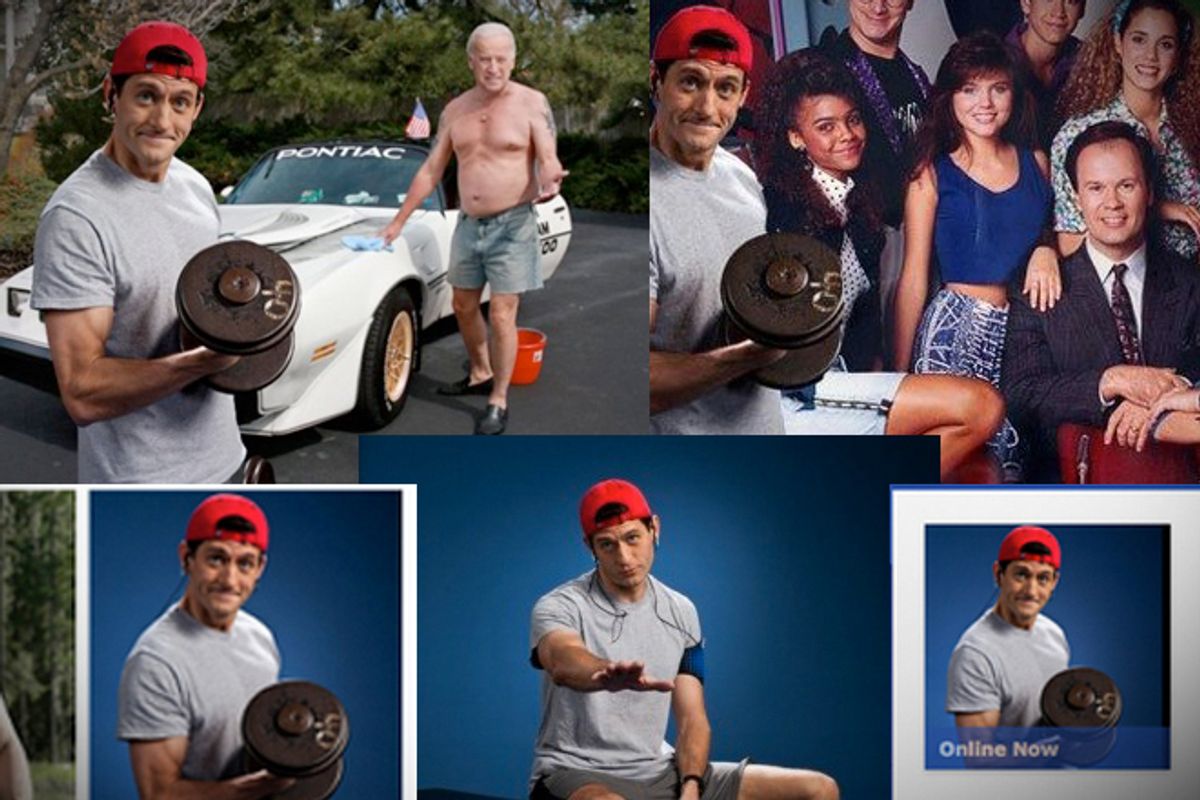 Whether or not you choose to blame Barack Obama for the state of the economy, for our ongoing military actions, for the messes in our public education system and the assaults on our reproductive freedom, I'd like to take a moment this election season and reach across the aisle about one important issue. Whatever our party affiliations, we can safely lay a whole lot of responsibility directly at his feet for one of the most dismaying and pernicious aspects of contemporary American politics: our leaders trying to make us give a crap about their workouts.

Remember four years ago, when it was all, Oh, hey, isn't it refreshing to have a candidate who looks good romping around in his trunks? When it was, can you believe how hardcore this guy is about basketball? Remember, when the Republican opposition chose a woman who could run a sub-four marathon in her 40s, after four kids? It was kind of nice. Let's face it, after 16 years of watching Bill Clinton chow himself into heart disease, and George Bush nearly die over a pretzel, it was refreshing to realize that leadership need not be synonymous with butt spread.

But now, it's getting to the point we might as well throw a swimsuit competition into the electoral process. Rahm Emanuel brags of his seven-day-a-week exercise routines. Aaron Shock has flaunted his six-pack on the cover of Men's Health as our great nation's most "ripped representative." And now, this week, the impeccably toned Sarah Palin has announced she's devoting herself to writing a diet fitness book with her family. Which is great, because every minute she's doing that she can't be mouthing off on Fox. "We promise you what we do works and allows a fulfilling quality of life and sustenance anyone can enjoy," she told People this week. Mmmm ... sustenance.

But on Thursday, it was would-be vice-presidential candidate and P90X enthusiast Paul Ryan who took the game to a whole new level. When Time unleashed a "pumped up" pictorial of him doing what he does best -- dumbbell curls -- Ryan and his awesome guns somehow managed to upstage his imminent debate with Joe Biden.  The photos, shot last December for Time's Person of the Year issue, have "instant meme" written all over them. If you've somehow not seen them yet, go ahead and look but I warn you, you won't be able to stop looking. SO MANY LAYERS.

In the utterly brilliant first three of the series, Ryan doesn't look like a traditional statesman. He looks like that putz at your gym who YEAAAAAGGGGHs his way through a couple of reps and then doesn't wipe down the equipment. In them, Ryan sits with a red baseball cap perched atop his head, buds in his ears as "You Shook Me All Night Long" surely blares inspirationally, and wears an expression that says, "I'm going to need more fiber." As a friend observes, the only thing not pictured is a barbed-wire tattoo on his bicep. I swear to God I don't know which I'm going to use this year as my Christmas card — the one where he's hoisting a 40-pound weight and bulging his eyes or the one where he's holding out his palm and pouting like he's petulant because Ryan Lochte went to Vegas with Prince Harry instead of him. Jeah!

If there is a heaven, Ted Kennedy and Tip O'Neill are no doubt in it drinking beer and eating wings and laughing uproariously over the fact that even Bill Clinton has now turned into a slender, vegetable-eating model of fitness and rosy health. Maybe we've become so politically superficial that we can have the expectation of a pinup quality to our elected leaders. Or maybe somewhere back in the recesses of our lizard brains, there's always been a part of us that somehow believes the ability to lift a piece of equipment with the number 40 on it might just qualify an individual to lead us. Whether the Time photographs — gloriously goofy as they happen to be — will convince anyone of Ryan's true fortitude remains to be seen. But I would definitely vote for him for President of Opening Pickle Jars.