The right's trying to spin it otherwise, but the VP's amusement at Paul Ryan proved his most effective strategy 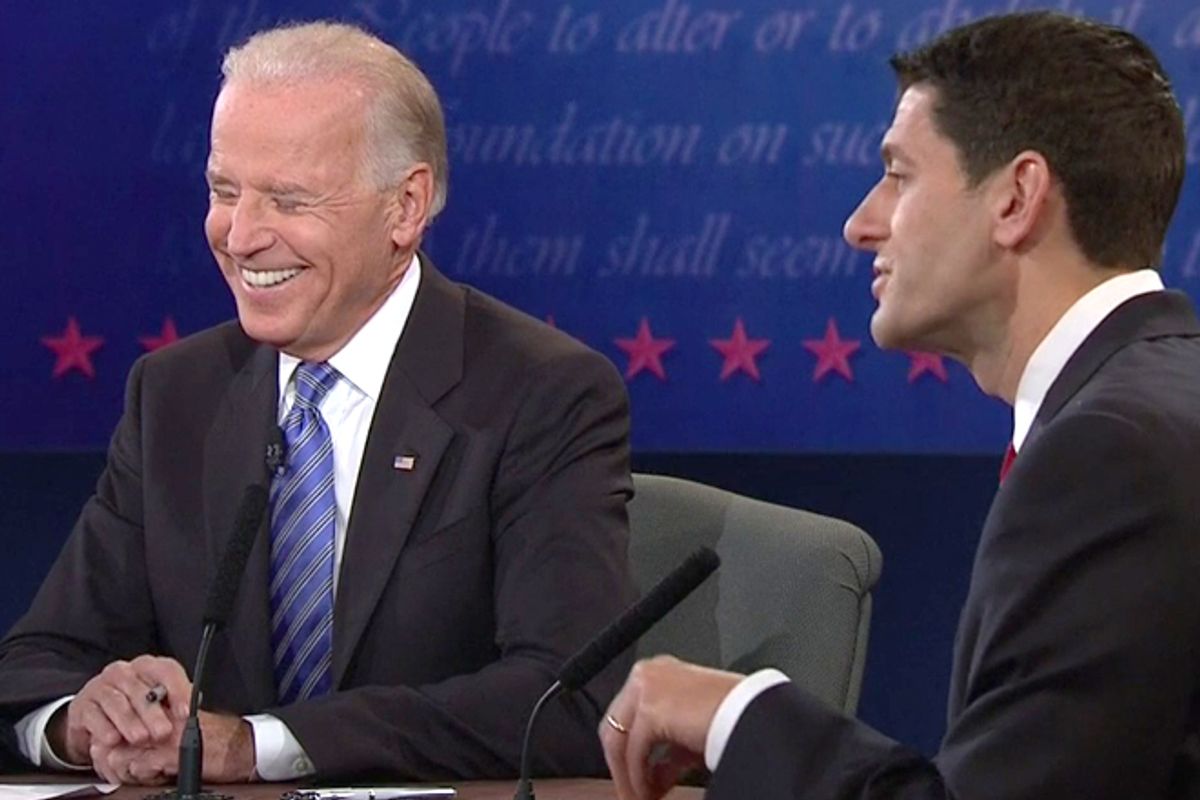 Though the vice-president's performance in Thursday's debate with Paul Ryan wasn't quite as meme-worthy as Paul Ryan's aspiring juicehead pictorial, which appeared earlier in the day, his sustained and undisguised amused contempt for the man across the table from him rightly proved one of the most memorable elements of a spirited evening. There was barely a moment when Biden wasn't speaking that he wasn't smiling ruefully or flat out chortling at every word coming out of the mouth of his opponent. Sorry, I mean his "friend." Hahahahaha.

It was a bold strategy — and make no mistake — that contemptuous, "You have got to be kidding" shtick had to have been well thought out. Predictably, a fair amount of the spin promptly painted Biden, the would-be funniest thing to come out of Scranton since "The Office," as a man whose permanent, preternaturally white smile was "unsettling," "inappropriate" and "a disaster." And, it's true, the image of our country's vice-president looking like he was having entirely more fun than many of his fellow Americans have had in the last several years was a mite disconcerting.

It was also, inevitably, a gauntlet thrown down to the Internet community, one swiftly picked up by the sudden appearance of a Laughing Joe Biden Twitter account and a spate of wildly expressive gifs.

Yet "Laughin' Joe," as ABC dubbed him, was also, to many of us, the most galvanizing Democratic moment since Bill Clinton's giddy attack on Paul Ryan's "brass" at last month's convention. Why? Because as Paul Ryan explained, while Biden sat by chuckling openly right in his boyish face, "When we look weak, our adversaries are much more willing to test us; they're more brazen in their attacks." Oh, Paul, honey, stop compulsively sipping your SmartWater and look over your shoulder. You're soaking in it.

Like Clinton, Biden understands the ferocious, angry power of laughter, the cathartic wallop that glues us to the likes of "The Daily Show" and the Onion. Obama pulls it off sometimes too, though his natural demeanor is cooler and more cerebral. Biden, the folksy and occasionally foul-mouthed regular Joe, is, in contrast, one evil grin away from being a homicidal Quentin Tarantino character. He's a guy who can sit back while his opponent rattles off an anecdote about a family that's been in a car accident and spend the rest of the night guffawing at him. It's a laugh that says, "Oh, you're going to lecture me about vehicular tragedy? Really? Well, since you brought it up, tee frickin' hee, a-hole." It delights in reminding us, "They talk about this great recession as if it fell out of the sky like, 'Oh, my goodness! Where did it come from?'" with an implied, "My sides! They're killing me!" It responds to criticism of the stimulus from a man who sent two letters asking for funds from it with an exasperated, "I love that." And I'll bet Joe Biden does.

Biden's laugh is utterly brutal because it takes Paul Ryan, the marathon-exaggerating, dumbbell-curling, wannabe manly man and does the absolute worst thing imaginable to a guy like that. It points at him and makes him a fool. It says, "Yeah, tell me another one, Backwards Baseball Cap." It's at once furious and dismissive. It understands that at the heart of humor there's a howl of pain. That why it's the favorite weapon of choice of the trod-upon. And it says to the American voters the most undermining thing imaginable: "You see this fella next to me? What a goddamn joke."