Think the treadmill can’t be just as tempting as the heroin needle? Welcome to the world of exercise addiction 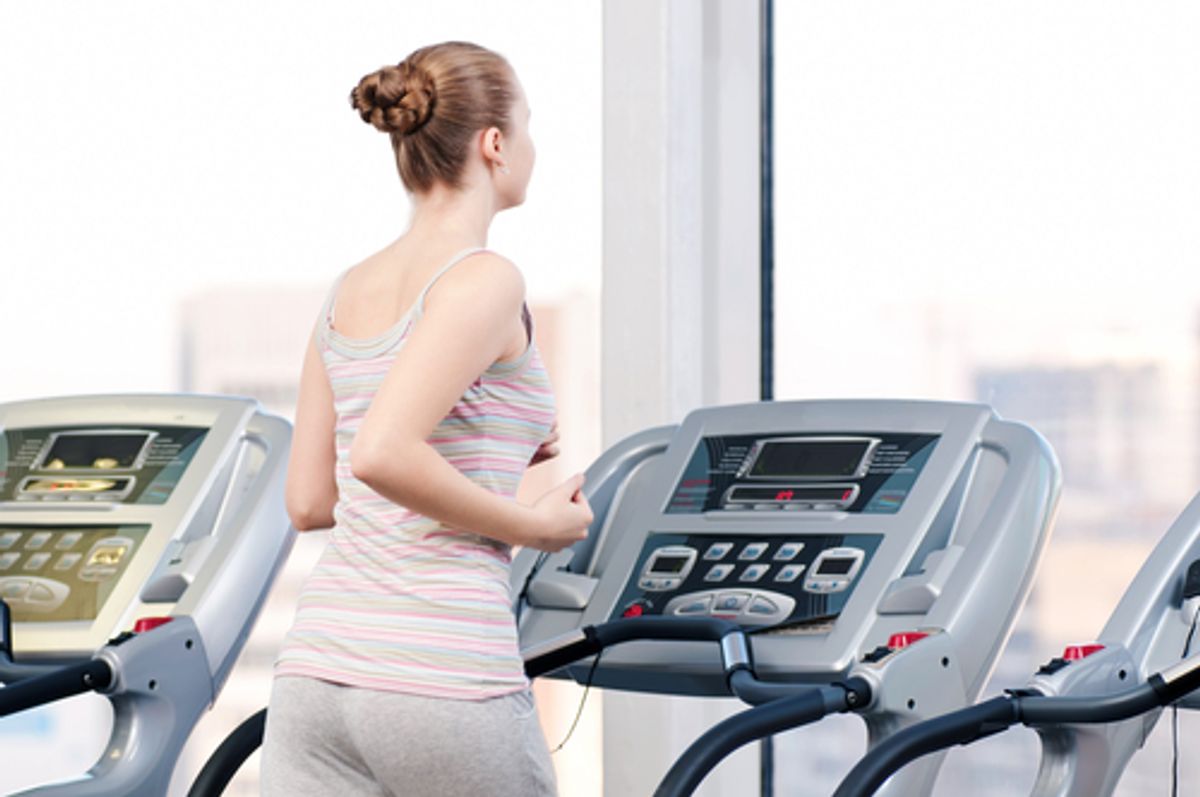 From the age of 18, at the slightest hint of stress, I would lace up my running shoes and head to the gym. Although I rarely drank and never touched any drugs, legal or otherwise, addiction was no stranger to my family. My gene pool is littered with a fondness for Jim Beam, heroin, and cocaine. But instead of the Everclear or ecstasy, I reached for the elliptical, and whatever else I could get my hands on. In fact, just thinking about the variety of machines awaiting me at the gym made my heart thud with anticipation. Should I hop on treadmill first? The stationary bike? Or should I spend the next several hours on the Stairmaster, step after step, climbing to nowhere? I was like an alcoholic in a liquor store, awash in booze. The possibilities seemed endless.

Say the words "exercise addiction" to most people walking down the street and many will tell you that it's an addiction they wouldn’t mind having. I learned the hard way that exercise addiction is all too real and that it's nothing to envy. My own journey down the path to exercise addiction started slowly, in college. For quite some time, I stayed well within the range of physical activity recommended by health officials: 30 minutes per day, three to four days per week. Sometimes I went to the gym five times a week. Other days, I didn't make it at all and my life continued to revolve around its usual axis.

My junior year, however, I was socked with a bout of anxiety and depression and I began to use the gym as my outlet. This, combined with a desire to eat better, led to the beginning of a decade-plus life-threatening battle with anorexia and exercise addiction. I no longer penciled in gym sessions on my schedule; now I essentially tattooed them in ink. The length of time I was there also began to increase. The paltry amounts of food I was eating, however, meant I could no longer climb a flight of stairs, let alone complete a punishing workout on the Stairmaster.

After several hospitalizations, I was again cleared to begin exercising. Immediately, the gym became my penance for eating or, more accurately, my way to atone for the sin of eating. If I felt like I ate too much, I simply exercised more. The amount of exercise I did was inversely proportional to the food I ate. I completed two graduate programs—one in public health, another in science writing—all while trying to balance the ledgers of calories consumed and calories burned.

My exercise addiction was there, smoldering, although I didn't know it at the time. No one ever questioned my devotion to working out. It looked like I was just "being healthy." Yet exercise had long since morphed from a way to lose weight into the only way I knew to manage my life. If I felt good, I treated myself to an extra workout. If I felt bad, I forced myself to run extra miles. The thought of skipping a day due to illness or injury was almost laughable. But I thought I had everything under control.

A smoldering addiction became a raging bonfire when I had my first real job after finishing grad school. My office had a gym. So did my apartment. The temptations of exercise equipment available 24/7, not to mention avoiding the weird stares at being seen working out several times in a day in one place, was simply too much. I coped with the stress of my job and life in a big city the only way I knew how: I exercised.

My body handled the extra abuse at first but eight years of starving, purging, and over-training had begun to take their toll. I developed one stress fracture, then a second. Still I exercised. I had long since been diagnosed with osteoporosis as a result of anorexia; the lack of nutrition had caused my menstrual cycle to stop for nearly a year and the loss of those hormones had leached valuable calcium from my bones. I fretted plenty about what damage I was doing to my body but these worries were subsumed by anxieties over not exercising.

Within just a few months, I was exercising more in a single day than is recommended for most people in a week. The only things I could squeeze into my schedule were work, exercise and sleep—not that I had the energy for anything else, anyway. I tried to stop several times but each attempt ended with me on the floor, shaking and sobbing until I eventually would say, Oh sod it. It's easier to go to the gym. And so I did.

Although I didn't understand my behavior at the time, I was acting suspiciously like the rats in a 2009 Behavioral Neuroscience study led by Tufts University neuroscientist Robin Kanarek. Researchers had known since the 1960s that if you restrict a rat's food and give it unlimited access to a running wheel, he will stop eating and literally run himself to death in a matter of days. Kanarek wanted to uncover the neurochemical mechanisms driving such behavior and discover whether exercise was truly addicting or if some other aspect of biology drove these mysterious running rats.

She divided 84 rats into four groups: one had access to a running wheel and normal food intake, another had a running wheel and restricted food and two control groups had no running wheel and normal or restricted food intake. After giving the rats several weeks to acclimate to their new routines, researchers then dosed them with Naloxone, a drug that blocks dopamine receptors and induces immediate withdrawal symptoms. The wheel-running rats’ eyelids drooped, their teeth chattered and they began to shake and twitch—all signs of withdrawal. They actually looked suspiciously like the withdrawal symptoms seen in narcotics addicts.

Exercise, then, had become my heroin. Some therapists refer to exercise dependence and eating disorders as "the good girl's addiction." Not only are working out and dieting socially accepted but they're also very much encouraged. Even as my mind and body sunk deeper and deeper into anorexia and exercise addiction, co-workers and friends never told me to eat more or to just this once leave my gym bag at home. Although my weight was far too low for my body type (which was, ironically, rather athletic and muscular rather than waif-like), I wasn't emaciated. So I received pats on the back, praise and even outright envy, which made it harder to admit that my exercise and eating habits were a problem.

Eventually, however, my body and mind began to break down under the ongoing stress of maintaining an extreme exercise routine on a starvation diet. I'm scared of my brain, I finally whispered to my therapist. I had never discussed my exercise issues very much, convinced I had them under control and terrified at the thought of trying to decrease the ridiculous amount of time I spent at the gym. I don't want to do this but I can't stop, I told her. I just want to give up. I'm trapped. Narrowly escaping yet another hospitalization for wanting to take my life and because my heart rate and blood pressure were precariously low, I quit my stressful job and moved home, where my parents watched me nearly 24 hours a day, ensuring I ate every bite of food and didn't exercise. My exercise addiction, however, did not go gently into that good night. I frequently woke up after sleeping for only a few hours and would jog in place and do countless sit-ups in my childhood bedroom. Even though I knew exercise would burn precious calories and force me to eat more during the day to get back to a healthy weight, it didn't really matter. I simply had to exercise.

Over time, as improved nutrition cleared my thinking, I stopped working out in the middle of the night. My treatment team advised me to abstain from all exercise until my weight was stable and the worst urges to compulsively exercise eventually passed. It took almost a year but I was slowly able to integrate healthy amounts of physical activity back into my life.

Still, my exercise addiction has returned in the past few years. But I'm much more aware of the warning signs—like avoiding social events so that I can work out instead or telling myself that I need to exercise for a certain amount of time each day—which signify that my exercising is tipping into an unhealthy domain. Going to a gym is impossible for me; the blinking red lights on the machines, the acrid smell of stale sweat, the countless people bobbing up and down on treadmills and elliptical trainers are all too triggering. Exercising outdoors or with friends are the best for my mind, body, and spirit. Over the past two years, I have nurtured a love for cycling on the back roads and trails in my area and I indulge my habit frequently—although in a healthy, non-obsessive way.

Most people still don't understand what exercise addiction is and how devastating it can be. Until it happened to me, I had no idea either. Yet as I opened up about my own struggles, I found a surprising number of people, both male and female, could relate to my story. Moderate exercise has many physical and psychological benefits, but I am living proof that too much of a good thing can be very, very bad.