Between Kalinda's and Alicia's love lives, "The Good Wife's" sexual politics are a mess 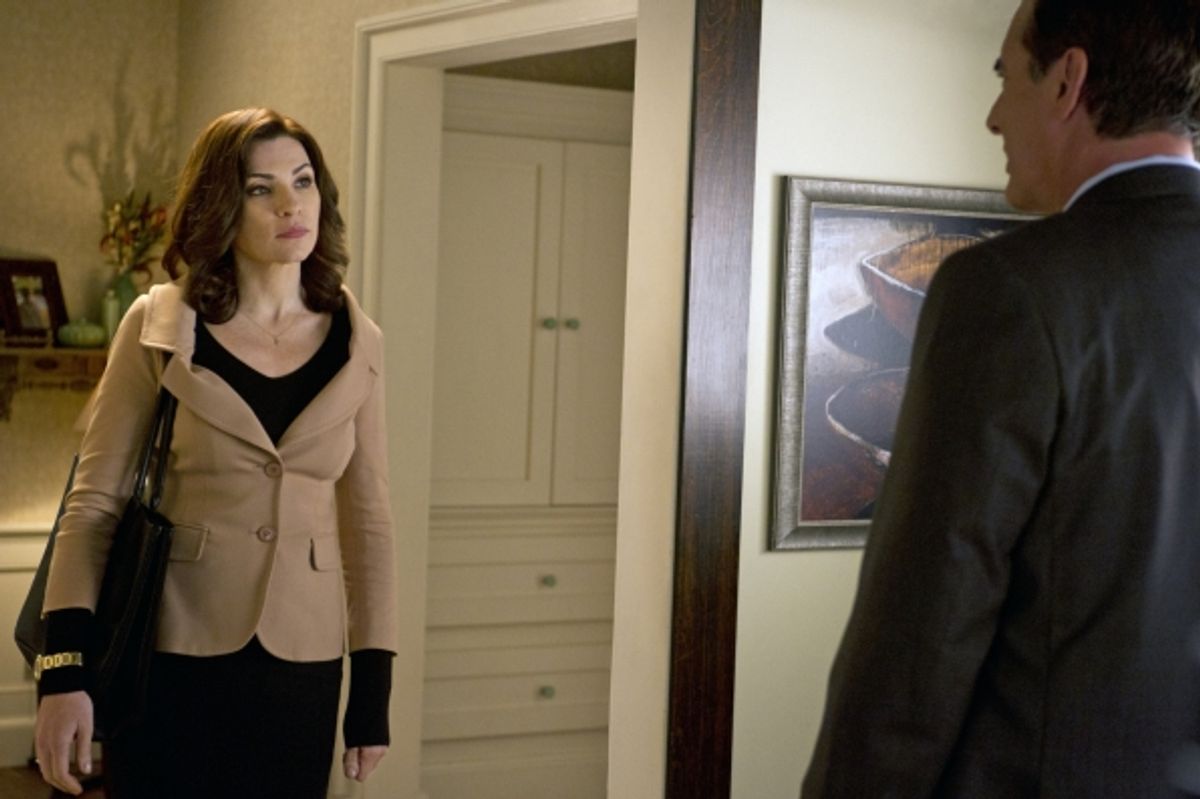 “The Good Wife” is three episodes into its fourth season, and it is simultaneously smoothly humming along and sputtering out. It remains, as it ever was, the cleverest, smartest, most tech-savvy procedural on television, its every case of the week so much less predictable and more hard-elbowed than those of its kin. (The title of last night’s episode was “Two Girls, One Code," a savvy, gross reference “The Mentalist” isn’t about to make.) The inter-office dynamics and political plotting— the long-term story arcs that make “Good Wife” so much meatier than a standard procedural — have also been top-notch. A super low-key Nathan Lane (he hasn’t been asked to act so much in years) has been stellar as a court-appointed guardian to Lockhart Gardner; Maura Tierney has been intriguing as self-made billionaire keen on Alicia; and Christine Baranski, Alan Cumming and Josh Charles have been excellent as ever. But, damn, if “The Good Wife’s” sexual politics aren’t a mess.

First and foremost, there is the Kalinda problem (and yes, it has reached such a level it can be described as “The Kalinda Problem”). Kalinda Sharma (Archie Panjabi), the hypercompetent bisexual investigator, has spent the previous seasons turning up evidence and turning on nearly everyone she meets. Few of the characters on “The Good Wife” — with the exception of Cumming’s Eli Gold — are chatterboxes. They don’t overshare, speak out of turn or answer questions with more words than are strictly necessary, but even among a crew expert at keeping their lives close to their vests, Kalinda stands out. Everything about her feels like a secret, everything about her is private. We knew she had a past, but we didn’t know quite what it contained.

Well, the past has arrived and it’s her ex-husband, Nick Saverese (Marc Warren), a thuggish, rich ex-con just out of prison whom she simultaneously likes to hurt and have sex with, and the sex often involves innocent food products. To get close to Kalinda, Nick opened a case with Lockhart Gardner. When the two first encounter each other in the firm’s elevator, they proceed to beat each other up, turning “The Good Wife” into a nonsense version of “Mr. and Mrs. Smith” — the fisticuffs ended in, of course, a good boinking. I believe in Kalinda’s intelligence and competence, which is why I never thought I would see her engage in UFC-style street fighting with a fully grown man at her place of business, but then, we’re apparently supposed to believe that Kalinda’s so mixed up about Nick — so drawn to him, and so disdainful of him — she’s nearly lost her mind.

Nick loves Kalinda and on a number of occasions has menacingly explained how he is never going to let her go. Kalinda, always with zero emotions playing across her face, refutes him and then fucks him. (Panjabi’s under-emotive acting style has Kalinda seeming like she’s in some sex-and-violence fugue state.) Last week, when he went to the bathroom after sex, she pulled out her gun. This week, after morning-after-omelet-making went way wrong, she grabbed onto a kitchen knife. Kalinda, do you really think your ex-husband is going to kill you? Or is this just foreplay? And, aren’t both options unsettling and ridiculous, a deep, dark character flaw put in the service of some campy, faux-Freudian sex-equals-death metaphor?

It’s certainly disappointing. The whip-smart, ultra-sexy, always in control investigator is only uncontrollably hot for the guy she’s terrified of, and in his presence, she can no longer function normally. After all these years, we’re supposed to believe Kalinda, ever the dom, wants in her heart of hearts to submit? I don’t buy it. Even when Nick leaves — and that can’t happen soon enough; the pair doesn’t have good chemistry, however many ice cream cones they mangle — “The Good Wife” is going to have to dig into what that really means for Kalinda, lest they destroy a great character with this kinky-by-CBS-standards story line.

And it's in the context of the Kalinda story line — the revelation that the show’s major lady badass  is pretty down to be in an abusive relationship — that Alicia’s (Julianna Margulies) decision at the end of last night’s episode to make out with Peter (Chris Noth), the husband who Eliot Spitzered her at the very beginning of the series, seems so retrograde.

In last night’s episode, a magazine was threatening to expose an affair that would affect the Florricks and Peter's campaign. At first, and much to Alicia’s terror, it seemed like it might reveal Alicia’s affair with Will. Then it seemed like it might reveal Peter’s affair with a staffer. But Peter hadn't had an affair with a staffer — the staffer was lying— and the magazine killed the story. So overcome that Peter had not gone back to his hound-dog ways and so remorseful for doubting him, Alicia walked into his campaign trailer and kissed him.

The Alicia-Peter reconciliation has been in the works for a long while, certainly since the beginning of last season. Peter may have done some bad things, but he’s an appealing, decent guy deep down. Alicia likes him and believes in him. She’s campaigning for him. They have children together and chemistry. And now, the intimation of last night’s episode was, she can finally trust him too.

As Alicia speechified on last week’s episode, she is not a figurehead, she’s a real person, and she has no obligation or desire to do anything for the public just to keep up appearances. She's not going to stand by her man, or stay away from him, to please some interest group. She’s not a symbol or an argument, she’s a human being.

Except, of course, she is all of those things at once as “The Good Wife” well knows. The show is an examination of the human side of a near-mythic personality, the scorned political wife. We have sympathy and respect for Alicia, we understand how and why she would get back with Peter, and we are also well aware of how this looks from the outside, how it will help Peter's chances, how it will make Eli Gold's day, how she is going back to the husband who humiliated her. Alicia and Peter’s reconciliation isn’t, like Kalinda’s story line, ludicrous, but it is, like the Kalinda story line, about a woman who can’t stay away from the man who did her wrong.