The HPV vaccine won't turn your daughters into tramps

A new study shows Gardasil doesn't affect sexual behavior. But why should that matter anyway? 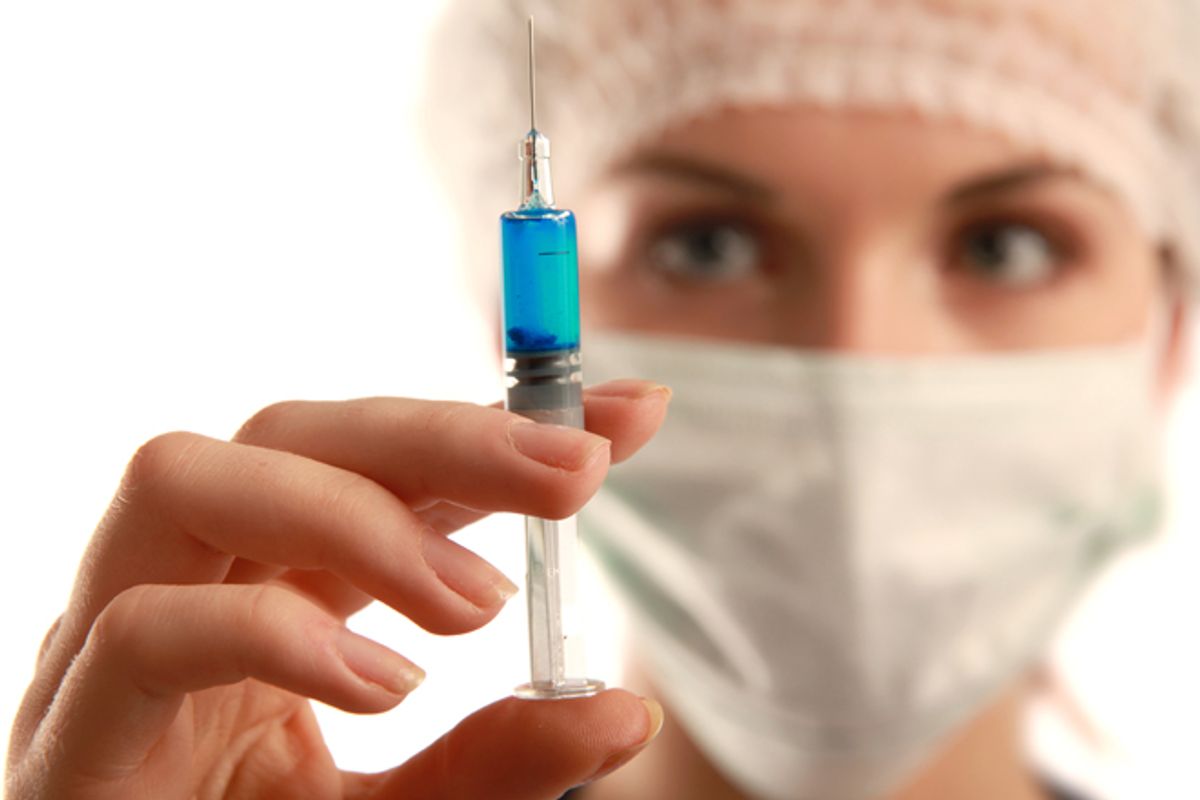 You can rest easy, folks. Apparently protecting our daughters from the HPV virus — and, by extension, the threat of cervical cancer — won't turn her into a raging slutmonster. A new three-year Kaiser Permanete/Emory University study published this week in the journal Pediatrics reveals that girls who've been vaccinated with Gardasil at ages 11 and 12 showed no higher rates of pregnancies, sexually transmitted infections and contraceptive use than girls who hadn't. The results of the study made major headlines Monday, with CBS News reassuring us that "HPV Shots Don't Make Girls Promiscuous." MedPage declared, "HPV Vaccine No 'License for Sex' in Girls." So I guess it's cool to vaccinate them after all! Now if you'll excuse me, I have to go find Doctor Who, because I need a Time Lord to explain to me why this crap is still even an issue in 2012.

Six years after its approval, the vaccination rate for Gardasil is still very low – around 34 percent — thanks in large part to the drug's public image problem. A Yale study, for instance, found the concern over "promiscuity risk" was the single biggest cause of non-vaccination. And a year ago, when the CDC began recommending the vaccine for boys as well as girls, professional crazy person Michele Bachmann made a big noise over the idea over a vaccine being foisted on the "innocent."

So the news that Gardasil is not, in fact, Mardi Gras in a syringe, should be seen as a hopeful sign to parents. Dr. Elizabeth Alderman, president of the North American Society for Pediatric and Adolescent Gynecology, told the New York Times Monday, "I'll now be able to use this study as a piece of evidence to show them that it's not going to give girls a license to sexual activity." Gosh, there's that wonderful phrase "license for sex" again. Where does one get one, then, and do I need to get it notarized?

Whew to all this, right? Because, well, imagine a world in which girls had a license to sexual activity. Imagine if healthcare gave them agency over their own bodies. Good thing we now have a shred of evidence that not having the threat of a virus or cervical cancer hanging immediately over their heads doesn't immediately make them run out and turn into damaged goods. Otherwise I guess we'd have to rethink this whole preventing cancer thing.

The issues surrounding HPV and the Gardasil vaccine are deeply personal to me, as they should be for everyone who is either female or male, who has daughters or sons. Between 70 and 80 percent of all sexually active people will at some point contract the HPV virus, which is transmitted via skin-to-skin contact. I'm in that large population myself, and I've had two LEEP procedures to remove precancerous cells to show for it. And though my 12-year-old daughter wound up getting her first Gardasil vaccination because of a pediatrician's careless error, she and I have had serious conversations about what the vaccine does and why it's important. That's why I'm proud that she made the choice to continue the course of vaccination, based not on how she behaves as the little girl she is right now but in the interest of the person she will someday become.

It's not always easy to talk to a tween about sexuality. In some ways, it's a lot simpler to have those discussions with a young child, when they can be framed in the very naive, abstract vernacular of "where babies come from." It gets tougher when your kids are suddenly in school with teenagers, when their older friends are beginning to have sex lives. But if you think that having conversations with girls is tantamount to encouraging them to run wild, what can I say beyond, sweet baby Jesus are you kidding me?

First of all, if you live in any version of reality where you think restricting access to healthcare is a great way to keep your ladyfolk in line, please rouse yourself from your deep slumber and join us in the 21st century. You'll like it here. You can take pictures on your phone and you can get cheese in your pizza crusts. And once you get here, how about you raise your kids — both boys and girls — to have enough self-esteem so that as they grow up, they can make choices based on something other than fear? That's how morals are supposed to work.

Second, let's imagine for a moment that a vaccine that prevents HPV actually would increase sexual activity. Or, in the same vein, that sex education would. You might be surprised by the truth about that one. Or that access to birth control or abortion would. How could anyone in his or her right mind still think that's a justification for restricting them? For not even talking to your kids about them?

If you think that withholding information, or vaccinations, is a great idea because Oh, no, what if kids then have sex? here's a news flash. Your children are going to grow up. They're going to become sexually active people. It's going to happen. If you're afraid of awkward conversations about that reality, get over it. Because your first job as a parent is to protect your children and advocate for their well-being. Not lock them up and cross your fingers. So talk to them. Respect them. Respect them so they can respect themselves and their future partners. And if what's been holding you back from all that has been your fear of your little girl turning into a tramp, you don't even have that excuse anymore now, do you?