The haunted house is now an insane asylum: You're in Jessica Lange's Nurse Ratched–nun's hands now 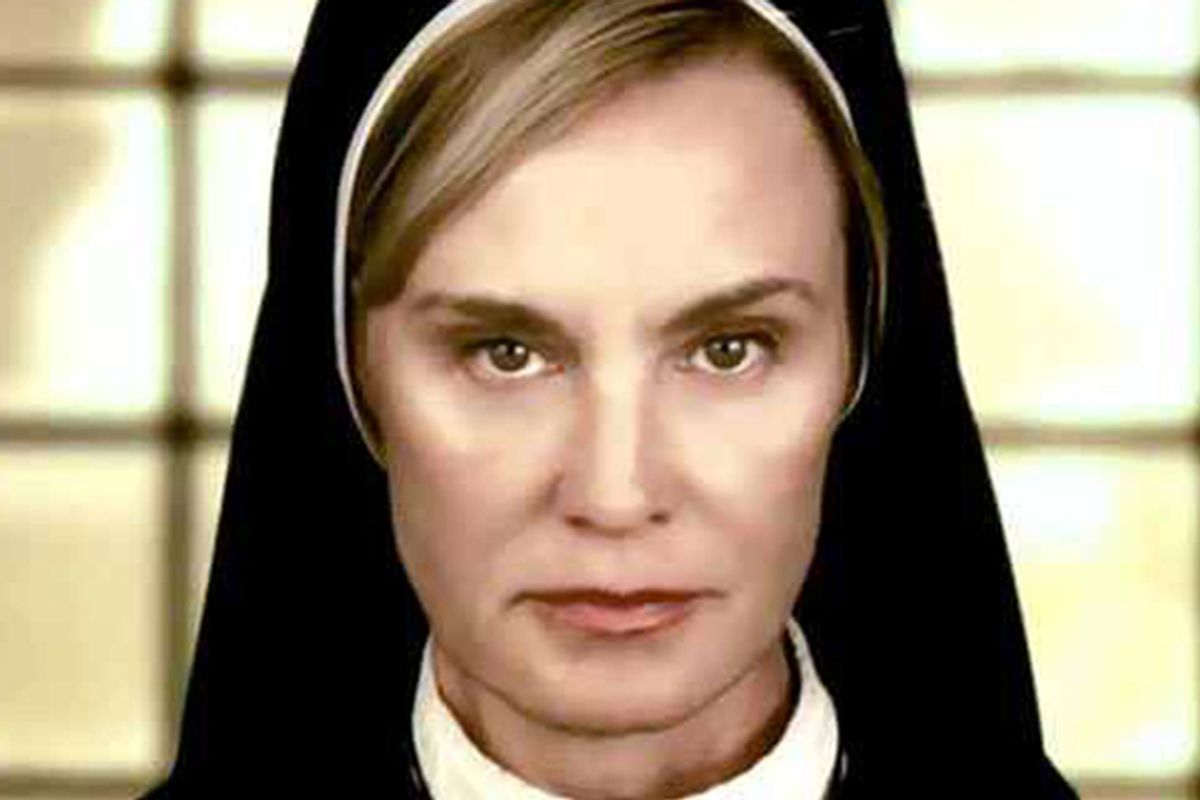 This is an incomplete list of ingredients included in the first two episodes of the new season of the grandiose, gruesome goulash that is “American Horror Story: Asylum,” which returns Wednesday night on FX, and needless to say is back, way back. The excellent, ridiculous new season, like the last, brims over with feverishly campy horror tropes, but is both more controlled and more subversive than the last outing. With one season of the anthology series behind it, creators Ryan Murphy and Brad Falchuk are more confident: They know this will work. Watching, you feel like you’re in good — by which I mean deranged, perverse, melodramatic, bleeding — hands.

Except for a modern-day framing device, the first episodes of “Asylum” take place in 1964 at Briarcliff Manor, a home for the criminally insane that was previously a sanitarium for TB patients: 46,000 people have died there, just an intimation of the bad juju surrounding the place. The institution is being overseen by the Catholic Church, and the inmates being tended to specifically by Sister Jude (Jessica Lange) who believes that “Mental illness is the fashionable word for sin.” Watch out, sinners.

The first season of “American Horror Story” orbited around the Harmons, a nuclear family. The deranged wackadoos who came to plague them —  ghosts, murderers, ghost murderers, real-estate agents and mediums — flitted in and out of their story, which could be a drag. Dylan McDermott’s Ben Harmon, a crappy husband with a tendency to wear fedoras (the latter reliably presaging the former), and Connie Britton’s overly grounded Vivien were two of the series’ least interesting characters, but because of their primacy to the premise, their arc remained front and center, forcing scene stealers like Kate Mara’s unhinged mistress and Zachary Quinto’s steroidally stereotypical bitchy gay to remain scene stealers.

Season 2 does not have main characters as such. Much of the vast cast is introduced in Episode 1, where they exist in the same time zone and same corporeal state, with comparable screen time. Getting thrown into the show’s murky deep end is a creepy pleasure: There’s no break from the madness, no sunny suburban kitchens to hide out in, and the relentless setting provides time for the fleshing out of all of the broken weirdos inhabiting Briarcliff, not just a chosen few.

Lange’s Jude is, as ever, first among equals. She’s thrown over the Blanche Dubois–in-a-drag-show Southern accent of Season 1 for an equally captivating Boston lilt. She’s a bit less of a scenery chewer here — as much as a nun who likes to cane people, lusts after her monsignor, and wears lingerie under her habit can be — but she is more human. Yes, she’s an unfeeling, malicious scourge to her wards, but it seems to spring from her faith, both in God and the power of the devil. She can show compassion to her inferiors, and, unlike at least one of her male colleagues, doesn’t believe in using her family-less charges as animal food. If “Parks and Recreation’s” Leslie Knope is the sympathetic reading of Tracy Flick, Sister Jude is almost the sympathetic reading of “One Flew Over the Cuckoo’s Nest” Nurse Ratched, the merciless totalitarian, who is, from a certain angle, doing the best that she can.

Joining Lange on-screen are a number of actors who appeared in Season 1. Murphy and Falchuk have gamely given them entirely different parts, which they ably embrace (actors! They can act!), fostering an appropriately unsettling hall of mirrors effect. Evan Peters, who played the sociopathic heartthrob Tate last year, is again playing a heartthrob, but this one, Kip Walker, is only being framed for being a sociopath — he’ s accused of murdering women, including his wife, but he only remembers being abducted by aliens. Lily Rabe returns as a dim, sweet nun about to turn devilish. Sarah Paulson, previously an unremarkable medium, steps into the role Connie Britton evacuated — the relatively sane, totally tortured person in a house full of crazies — as a lesbian journalist who gets wrongfully institutionalized. They are joined by newbies Joseph Fiennes as the monsignor, Chloe Sevigny as a nympho with not given quite enough to do, and, most memorably, James Cromwell as Dr. Arden, the Mengele of the piece, an experimenting physician who commands a prostitute to “Show me your mossy bank.”

The most surprising thing about “Asylum” is that, in its over-the-top way, it’s a much more satisfying platform for exploring the set of social issues Murphy’s other series — “Glee” and “The New Normal”— so badgeringly take on week after week. “Asylum” dives right in on racism, homophobia and sexism, and wrings something emotional out of them. Kip is married to an African-American woman. They love each other very much, but live in fear for their lives. After Kip is taken to Briarcliff for possibly decapitating said wife, his shrink hypothesizes it might have been because of suppressed racial anxiety. Meanwhile, Paulson’s character, Lana, is in a long-term relationship with schoolteacher Wendy (Clea Duvall). Lana is caught snooping around Briarcliff and locked up, and kept there only after Sister Jude successfully blackmails Wendy into institutionalizing her partner, by threatening to out her. Meanwhile, Sister Jude, sworn enemy of Dr. Arden, futilely screams after him, “I’ll always win against the patriarchal male,” even though, in the first two episodes, she just loses and loses.

None of these story lines is particularly subtle — Ryan Murphy has a lot of skills, but subtlety is not one — but they seem so married to the even more unsubtle horror beats. When there’s a stabby serial killer known as “Bloody Face” wandering around the premises and a nun whipping the bare ass of a handsome 20-year-old, being mistreated and mistrusted because of who you love works as a grounding element, a bit of recognizable human emotion and pain that make all the gruesome thrills meaningful.

Moreover, in horror, the stakes are always heightened: Racism and homophobia will get you … unjustly locked up in an evil insane asylum for your whole life. At one point Quinto’s psychiatrist rails at Sister Jude for continuing to use electroshock treatment as a cure for homosexuality. He takes a pause, and then says, “Behavior modification is now the norm.” Now that’s really horrifying.