"Brooklyn Castle": An inner-city school where chess legends are made

A corrective to "Won't Back Down," this doc about tween chess champs proves public schools may not be hopeless 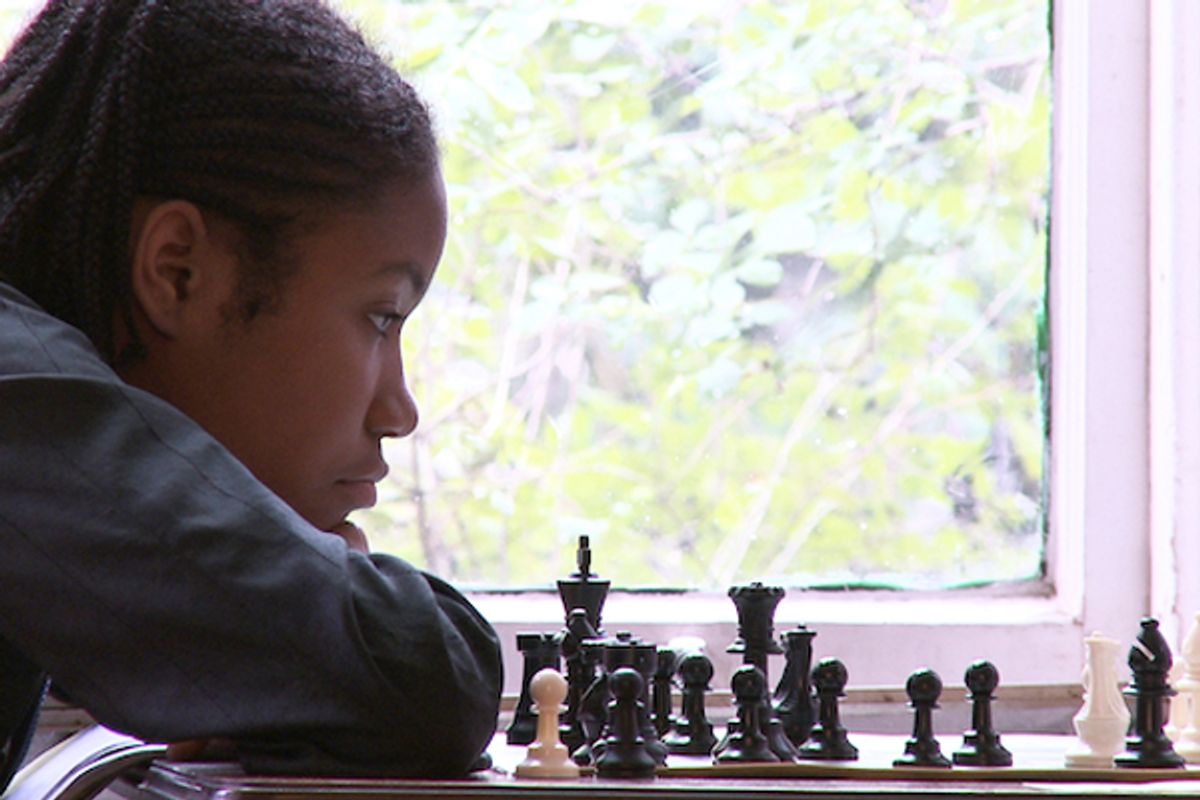 A still from "Brooklyn Castle"
--

If you want reassurance that not everything about American public education is hopelessly broken — and if you want to see what may well be the most optimistic, inspiring and downright thrilling movie released all year – then absolutely do not miss Katie Dellamaggiore’s documentary “Brooklyn Castle.” Chess buffs and New York City residents may already know about the legendary chess team at Intermediate School 318 in the South Williamsburg neighborhood of Brooklyn, N.Y., a group of inner-city kids from diverse but mostly poor backgrounds who have dominated the junior-high chess scene over the past decade or so the way the Yankees dominated the American League in the 20th century. But it honestly makes no difference if you don't even know the rules of chess and have never visited New York; this is a story about human potential and the lingering possibilities of the American dream.

We haven’t heard much about public education in this year’s presidential campaign, as Barack Obama and Mitt Romney scrap over the so-called middle, which on that issue seems to mean slightly less or more budget-cutting, voucherizing and charter-school privatization. In fact, Obama’s record on funding for education is reasonably decent, but in an election season narrowly focused on short-term economic data and semiotic non-issues, anything that involves the possibility of spending money on uncertain future returns is totally off the table. Dellamaggiore offers a potent counterargument to the painful, grasping, Gollum-like myopia that dominates our political discourse, showing us a group of kids whose lives have been transformed by a handful of dedicated adult mentors and a relatively inexpensive after-school program.

Among other things, “Brooklyn Castle” washed the noxious taste of the teacher-bashing drama “Won’t Back Down” (which I'm delighted to say was overwhelmingly rejected by the public) right off my palate. Whatever sins the teachers’ unions may have committed, and however many unemployable drunks they’ve housed in “rubber rooms,” if they’re protecting the jobs of teachers like Elizabeth Vicary I’m on their side. A bone-skinny redhead with an unplaceable accent who seems to burn with intense inner fire, Vicary is the chess teacher who has transformed I.S. 318, a school where upward of 70 percent of the student body live in poverty, into the nation’s junior-high chess powerhouse. (Since the film was made, Vicary has gotten married; she is now Elizabeth Spiegel.)

Like any coach, Vicary spends a lot of time on her biggest stars, such as the utterly irresistible Rochelle Ballantyne, a national girls’ champion who hopes to become the first African-American female chess master in the game’s history; or junior phenom Justus Williams from the Bronx, who came to I.S. 318 in 2009 as the second highest-rated 10-year-old player in the United States. But you have to judge educators by a different standard — how they nurture “the least of these,” as a famous Jewish carpenter once observed. Vicary knows that most of the kids on her team will never approach the celebrity status of Ballantyne or Williams, and makes an eloquent case for how and why the ambiguity and complex decision-making found in chess will inform their future education and adult lives. We see her make a special effort to tutor Patrick Johnston, a shy and awkward kid with ADHD who is one of the weakest players on the team, before entrusting him to the care of Pobo, a charismatic 12-year-old who serves as the team’s big-brother figure. Of all the moving victories won by I.S. 318’s young players, Patrick’s modest triumph may have touched me most deeply.

In the inevitable Hollywood remake of this movie (which won’t be anywhere near as good as the original), Vicary’s role could go to Tilda Swinton or Cate Blanchett, while John Galvin, the hardass, Brooklyn-bred vice principal who has her back, can be played by James Gandolfini or Denis Leary. Dellamaggiore follows these two, along with Rochelle and Justus and Patrick and Pobo and the rest of the I.S. 318 team, through the traumatic 2009–2010 school year, which involved two rounds of budget cuts along with tearful, dramatic, up-and-down trips to chess tournaments in upstate New York, Dallas and Minneapolis.

Along the way, most of the players face a New York–specific ritual that no doubt has parallels in other cities: the rigorous citywide exam that is the sole criterion for admission to Bronx Science, Brooklyn Tech, Stuyvesant and the city’s other “specialized” high schools (that is, the ones that pave the way to elite universities and professional careers). It’s completely nuts that so much about a kid’s future can ride on a single standardized test, but that’s the system we’ve got, and Dellamaggiore’s film depicts I.S. 318 as a vibrant, hopeful microcosm of urban America — black and brown and white, immigrant and native-born — whose kids have not yet been dragged down by the overwhelming cynicism of the nation around them.

Is it prudent, asks Mr. Creepy Mini-Republican in My Mind, to spend taxpayer dollars on flying one chess team around the country when other students in their district, and very likely in their school, are flunking out and heading for lives of economic irrelevance? Well, Mr. CMRMM, screw you. That’s an unanswerable, unfair and even poisonous question, one that assumes that education is an industrial process aimed at drilling kids on the 3 R’s before fitting them for blue shirts at Wal-Mart, rather than a way of modeling critical thinking, adult behavior and community-mindedness.

It further assumes that what we love to claim is the greatest nation in the world can’t afford to nurture chess masters, damaged kids with learning disabilities and future vo-tech students, or that those categories don’t overlap in many cases. It assumes that we’d all rather save a few bucks on our tax bill and spend it on some new gizmo, rather than let devoted teachers like John Galvin and Elizabeth Vicary — genuine American heroes, if I’ve ever seen any — offer life-changing challenges to the kids of Brooklyn (or any other community you care to name). Is government wasting our money? Does it need to become more efficient? Do we urgently need to cut the deficit? Well, since you asked: Yes, probably and not really, respectively. But I would willingly, even happily, pay more taxes to pay for the chess team at I.S. 318 and similar programs at other schools, and after you see “Brooklyn Castle” you will too.