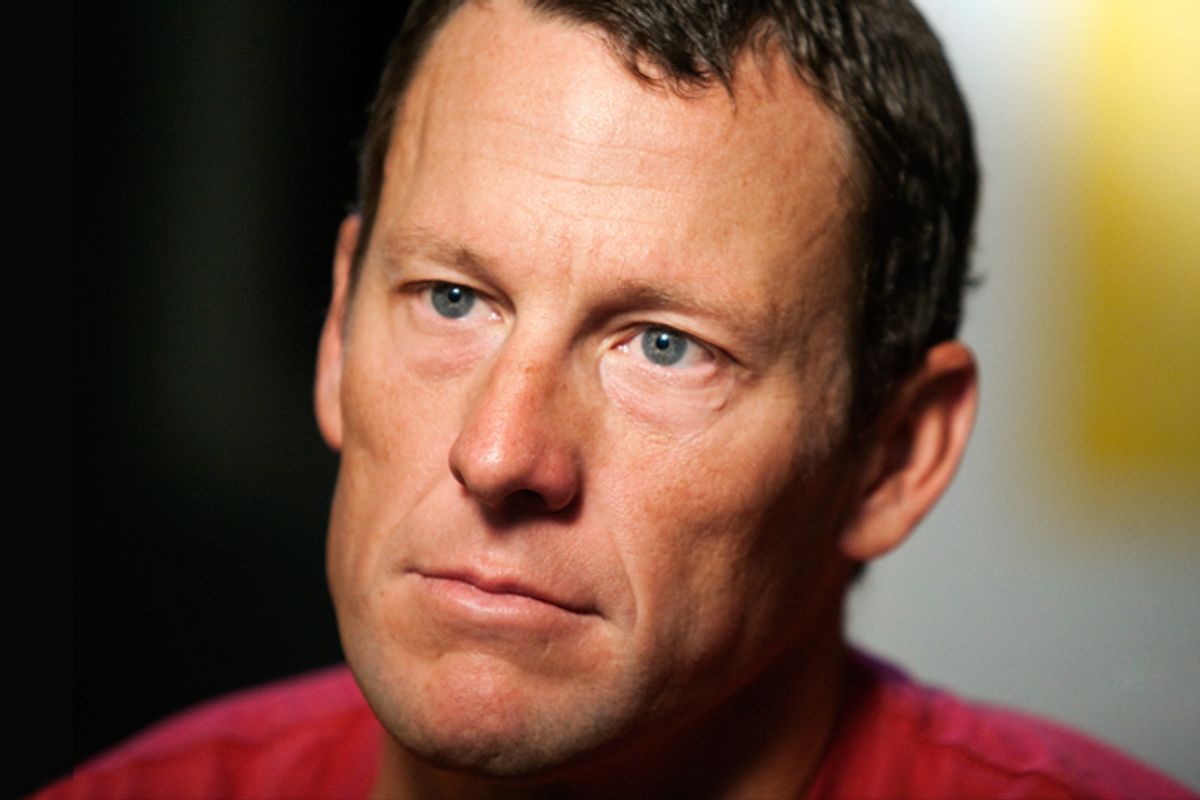 On Wednesday, Lance Armstrong announced he was adding a few more titles to his impressive résumé, along with seven-time Tour de France winner, Associated Press Male Athlete of the Year and Sports Illustrated Sportsman of the Year. You can now refer to him as the former chairman of Livestrong, and Most Disappointing Cancer Survivor of the Week.

The allegations of doping that have dogged Armstrong for most of his career seemed to come to a head in August, when it was announced he would be stripped of his Tour de France wins and banned from future competition. Back then, Armstrong tossed off a fiery response to what he called "an unconstitutional witch hunt," saying he was going to devote himself fully to "serving people and families affected by cancer, especially those in underserved communities." He continued, "This October, my foundation will celebrate 15 years of service to cancer survivors and the milestone of raising nearly $500 million. We have a lot of work to do and I'm looking forward to an end to this pointless distraction."

But now, it's October, and it turns out Armstrong's going to have a little more time on his hands. Last week, the United States Anti-Doping Agency released a 1,000-page report that concluded Armstrong had been the heart of "the most sophisticated, professionalized and successful doping program that sport has ever seen." With sworn testimony from 26 people as well as supporting "documentary, first-hand, scientific, direct and circumstantial evidence," whatever possibility of chalking the investigation up as a mere "witch hunt" definitively evaporated. And with it, for now, the last shreds of Armstrong's image as role model to survivors.

In his statement, Armstrong declared, "I have had the great honor of serving as this foundation’s chairman for the last five years and its mission and success are my top priorities. Today therefore, to spare the foundation any negative effects as a result of controversy surrounding my cycling career, I will conclude my chairmanship."

The timing is notable. It's surely no coincidence that Wednesday, Nike also announced it was dumping Armstrong as a spokesperson, in a statement saying, "Due to the seemingly insurmountable evidence that Lance Armstrong participated in doping and misled Nike for more than a decade, it is with great sadness that we have terminated our contract with him. Nike does not condone the use of illegal performance-enhancing drugs in any manner." The company did add, "Nike plans to continue support of the Livestrong initiatives created to unite, inspire and empower people affected by cancer."

Two months ago, I said that though Armstrong's "sporting legacy now is tarnished, it shouldn’t affect his philanthropic one." In retrospect, I was wrong. That was a naive hope. It was based on the goodwill that Livestrong has built for so long, and the community of survivors and patients and supporters it represents.

This weekend, Livestrong celebrates its 15thanniversary. Yet its Web page now bears the announcement of its disgraced founder's resignation. Doesn't exactly make you feel like donning a yellow bracelet and partying, does it? And that's a crippling blow to a four-star charity, one that has done tangible good for education, advocacy and survivorship. One that's needed. In short, it sucks.

Heroism is really, really easy to compartmentalize. You can be a great director and a sex abuser. A great football player and the leader of a dog-fighting ring. But what makes Armstrong's fall from grace particularly stinging is that his identity as a cancer survivor has been so deeply embedded in his fame — and so inspiring.

Take it from someone who's been through it — when you're going through the terror of a metastatic cancer diagnosis and the utter crap of treatment, you're so grateful for everybody who's gone before you and come out the other side.

The idea that somebody could endure advanced disease and then  perform incredible feats of athleticism has, for 15 years, been one of the all-time great screw you messages to cancer. That it was built on a tower of lies doesn't just diminish Armstrong's reputation, it plants a little seed of doubt in the minds of other cancer patients – it dims that powerful, necessary image of a future that could one day be even brighter than that of the person you once were. The person you forever stopped being the moment your doctor called with the news.

Very few of us who've been through the hell of cancer will ever get a Nike endorsement or win the Tour de France. And you know what? Ultimately, we'll be fine. We have plenty of other heroes, both those who've kicked cancer's butt and those who've shown us how to die with wit and grace. We even have them within the community that Armstrong built, in spite of himself. Unlike his medals, Armstrong's survivorship will never be stripped away from him; his membership in a unique and terrible club is permanent. But he's no longer a motivating image to hang onto in the dark moments, representing, through the pain and fear, what it means to live strong.