Mitt's wife is his greatest asset. But she missed an opportunity to get him out of a bind on "The View" 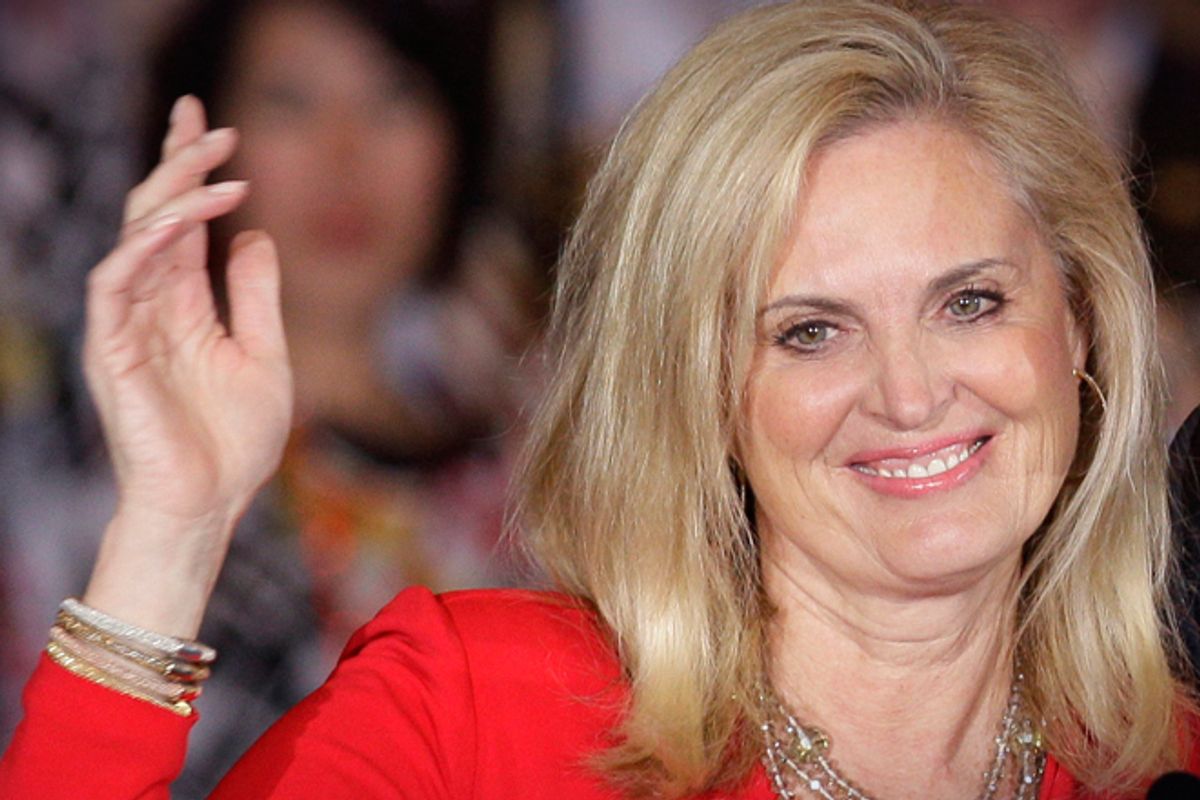 Today was supposed to be the day that Mitt Romney made up for talking smack on “The View” by actually appearing on “The View.” (In the infamous 47 percent session, Romney was taped saying of Barbara Walter’s daytime kaffeeklatsch "'The View' is fine. Although 'The View' is high-risk because of the five women on it. Although one is conservative, four are sharp-tongued and not conservative …”) But earlier this week, he begged off, leaving Ann Romney to go it alone with Walters, Whoopi, Joy Behar, Sherri Shepherd and Elisabeth Hasselbeck. It’s a move that probably worked out exactly as the Romney campaign hoped: Ann got to be Mitt’s likable, non-controversial, content-less surrogate. She made an appeal to “The View’s” female audience with her discussion of chore wheels, but not the issues, which she deftly refused to answer any serious questions about.

Ann, wearing a bright red, long-sleeved dress and accompanied by her cartoonishly square-jawed son Josh, who sat in the front row, joined the ladies on a turquoise couch. As she ably demonstrated at the convention, she’s comfortable on-camera, smiley, willing to crack a joke. (This being “The View,” the first question Walters asked was the self-involved, “Your husband said we’re high-risk and sharp-tongued.” Ann, well-prepped, quipped, “He said sharp and young.” Peace was restored.) But as she also ably demonstrated at the convention, she understands her role to be that of the constant character reference. She was on “The View” to attest to the goodness of her husband’s heart, rather than the soundness of his policies, and by her likability, devotion and fertility, rather than her opinions or acumen, to be a credit to him.

Walters first question was on abortion. Her husband changed his position on it, had Ann too? “The good news is that I’m not running for office and I don’t have to say what I feel,” Romney began, before adding, “but I’m happy to say I’m pro-life.” She said that in his heart Mitt had always been pro-life. She then got in the very conciliatory, bipartisan-sounding, “This is an issue that is so tender. And there are people on both sides of the issue that come with very good conscience, come with a different opinions. And I think the most important thing we can do is have respect for each other in this dialogue,” a comment that ended with the less evenhanded, “and understand that we are talking about two separate lives.” Romney, well-coached, then pivoted away from abortion unprompted, and got into the economic issues — “This year, nearly 95 percent of what I hear from women is ‘help’” — before somewhat meanderingly talking about how Mitt would be good for the economy, whatever his stance on abortion.

Joy Behar then asked Ann whether she thought abortion was an economic issue. “I would love it if you would get my husband on the couch, and you can go down with that all you want,” Romney said, as though “The View” had not tried this very thing. “What I know, what I can reflect is about my husband, and who he is as a person … I am here to reflect the character of the person that I know… Every decision that he will make, he will decide this way: Is this the best thing for America to go forward?”

And with that — the meaningless "Mitt Romney has America’s best interest at heart" —  Ann basically got out of answering any meaty questions. Conversation soon turned to Costco and chore wheels and why Ann doesn’t watch TV, much to Shepherd’s consternation. (It’s because she’s busy and doesn’t like to watch campaign ads.) Ann promised that Mitt wouldn't run again if he loses. Josh Romney even got to apologize for his brother’s comment about wanting to slug the president. “That brother has slugged me a few times, and I promise President Obama has nothing to worry about,” he said. “I assure you he didn’t mean it.”

It would have been pretty shocking if Ann Romney had actually said anything concrete on “The View” about anything at all, let alone abortion or reproductive rights; it was almost certainly her brief to do no such thing. But there’s something so lame about saying, “You could ask my husband if he were here, except, oh, right, he refuses to come here because he doesn’t want to answer even a handful of direct questions about abortion and reproductive rights.”

“The View” is often ridiculous — the title of this episode was “Red, White, and the View” and Bristol Palin and her “Dancing With the Stars” costar were the guests after Ann — but it is one of the few places Mitt Romney would have had to address such questions directly. Before Ann arrived on today’s show, the co-hosts got into it about politics, as usual. Hasselbeck began by talking about employment and small business numbers, saying of Obama, “This is not a women’s president.” Shepherd countered that women “still have to get a mammogram whether they own a small business or not.” The conversation then moved on to Planned Parenthood (Hasselbeck wants everyone to go to the Mayo Clinic) and the economic aspects of reproductive health, before finally taking up an even more controversial subject: Uma Thurman’s new baby’s name. As such juxtapositions demonstrate, “The View” can be a frustrating, silly show, but in its goofy way, it is also a serious one. They asked Ann Romney some real questions, which she very capably didn’t answer, cleaning up for her husband one more time.