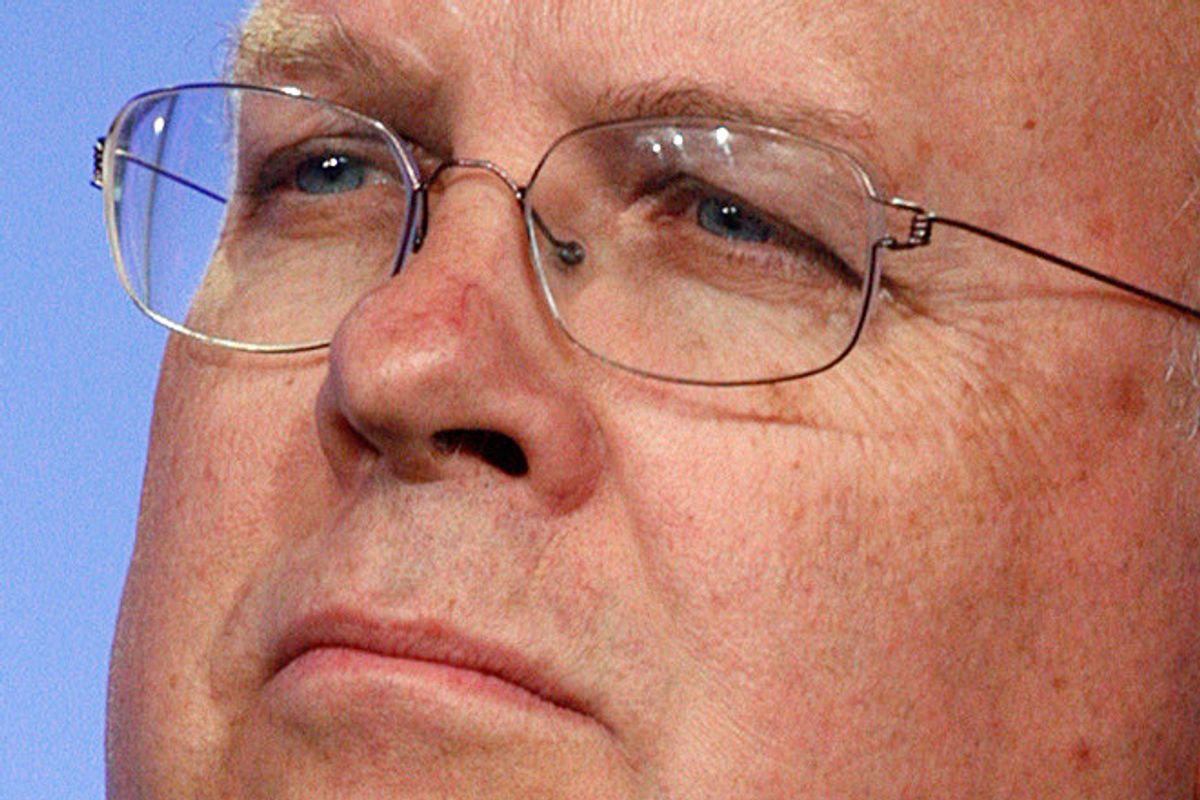 Karl Rove is partying like it’s 2004 — resorting to a theme he used in George W. Bush’s reelection campaign and reinventing it in a massive ad campaign being run by his superPAC, American Crossroads, that casts Barack Obama and the Democrats as soft on terror and evokes the fear that gripped the nation in the wake of 9/11.

The ad, “Act of Terror,” which started airing on October 18, is being heralded by some on the right as a stinging rebuke to President Obama’s foreign policy because it insinuates that Obama intentionally misled the American people in the wake of the assassination of Ambassador Chris Stevens and three other Americans in Libya in September.

It is based on one of the most dramatic moments of the second Obama-Romney debate in which Mitt Romney suggests that Obama purposefully put forth a false narrative to bolster the impression that he has been successful in fighting terror. It is artfully edited to omit the fact that moderator Candy Crowley stopped Romney in midstream during the debate and confirmed that President Obama did in fact use the phrase “act of terror” in a speech on September 12, the day after the tragedy.

But what is most striking about the ad is the fact that it harkens back to the days when Karl Rove ran George W. Bush’s campaign by characterizing him as a heroic figure who was battling terror — and demonizing John Kerry as too weak to be trusted on national security. Back then, as I report in "Boss Rove," Rove portrayed Democratic nominee John Kerry as a “flip-flopper” for having voted first to authorize the war in Iraq and then having voted to cut spending for it. “Kerry gave us the line that perfectly encapsulated who he was ... He said, ‘I actually did vote for the $87 billion before I voted against it.’” Rove went on, “I was dumbfounded ... In 13 words, he told Americans he was an unreliable, inconsistent, weak flip-flopper unfit for the Oval Office.”

In the subsequent ad campaign, Rove used images of Kerry as a windsurfer tacking one way, then another, to illustrate his “flip-flopping.”

In the same campaign, Rove donors backed the Swift Boat Veterans for Truth who famously attacked in John Kerry, a decorated war hero in the Vietnam War, with false assertions that he lied to get his medals.

On September 30, Salon reported  that Karl Rove intended to pursue a strategy of portraying Obama as a feeble, helpless Jimmy Carter-like president based in part on his response to the tragedy in Libya. On Fox News, Rove himself warned that Obama’s policies in Libya endangered the U.S. with regard to Iran. “I am astonished,” Rove said. “We are projecting weakness when we need to be projecting strength.”

When it comes to concerns about embassy security, the Republicans cut $128 million in 2011 and an additional $331 million in 2012 from what Secretary of State Hillary Clinton requested.

So why the deep concern from the Republicans? The answer may lie in Karl Rove’s tried-and-true tactic of attacking an opponent’s strong suit. As former counter-terrorism czar Richard Clarke put it in an article in the New York Daily News, Republicans are attacking because GOP “polling and focus groups show that voters believe that President Obama has done a very good job fighting terrorists. Therefore, the Rove theory says, you attack Obama on terrorism.”