The president was at ease on "The Tonight Show," discussing rape, Romney and his childhood with Trump in Kenya 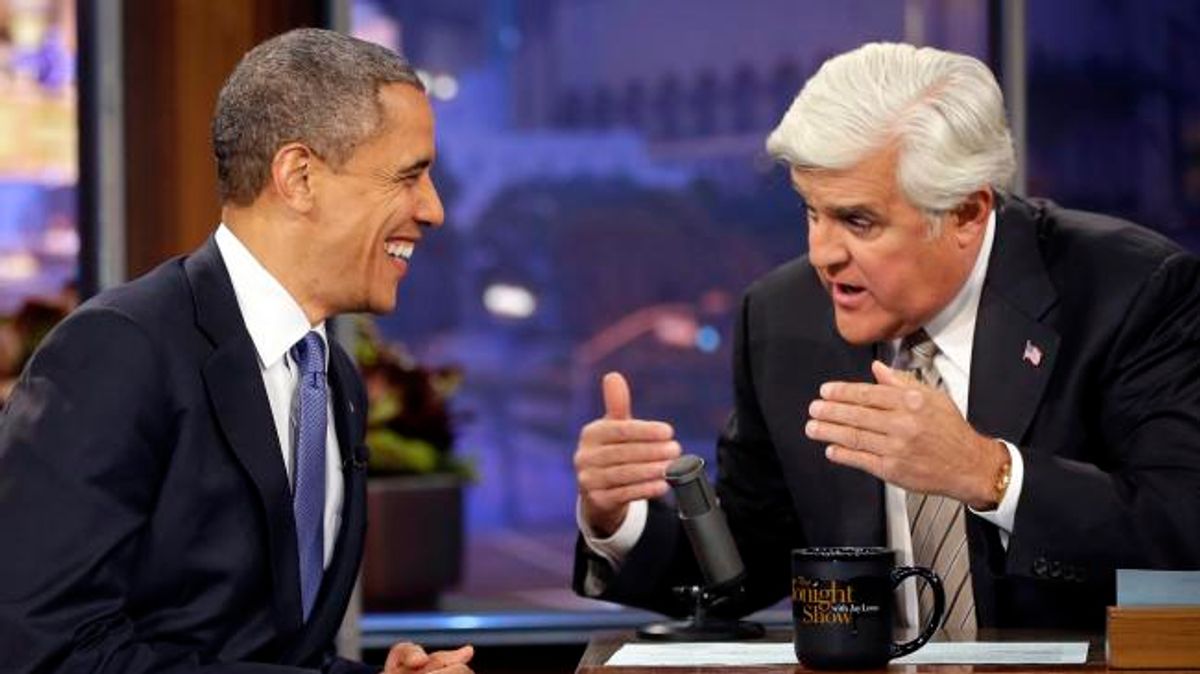 There’s been much spin of late that Obama’s on the defensive — because, you know, criticizing a front-running senatorial candidate for saying “God intended" rape is what nervous losers do. But it was pretty hard to argue that last night in the president’s assured, charming performance on a very friendly “The Tonight Show With Jay Leno.” As Jay joked in the monologue, President Obama “only does these [type of] shows once or twice a week now,” so he’s no stranger to the format. We're only two weeks from Election Day, and Obama seemed remarkably at ease, exhibiting none of the uptight professorial vibe he sometimes trots out at these things. Those notes he got after the first debate seem to have stuck.

Really, though: When Leno asked about the first debate, Obama copped to having done a poor job. “Clearly I had a bad night, because the whole point is for Americans to understand the stakes,” he said. “If you don’t have the energy to make people snap up, you’re not doing your job.”

This note seemed to suffuse Obama’s casual late-night performance. Whether cracking jokes or glossing policy, Obama was his second and third debate self, bright-eyed and keyed up, numbering his policy positions, keeping it clear and sticking it to Romney. Asked about his position on the Detroit vs. San Francisco World Series, Obama went there, pointing out he hadn’t let Detroit go bankrupt. Asked about Richard Mourdock’s recent comments, Obama said, “Rape is rape.” (Or actually, “I don’t know how these guys come up with these things. Rape is rape. It is a crime. These various distinctions about rape don’t make too much sense to me, don’t make any sense to me. This is why you don’t want a bunch of politicians, mostly male, making decisions about women’s healthcare.”)

For a late show appearance, this one was fairly substantive. Leno played the Jim Lehrer role of setting up the topics (so what about Afghanistan?) and letting Obama knock ‘em down. But the purpose of shows like this is to push the candidate's likability, more than their wonkery: The jokes matter most. And they were pretty sharp and very well-delivered. (And also, presumably, pre-scripted.) Obama has a very dry sense of humor, which sometimes plays as stilted or awkward, but his deadpan wit served him very well last night, with each punch line relying on the president keeping a straight face.

When Leno asked if he was relieved the debates were finally over, Obama replied, “You know, I was sort of getting the hang of it.” Asked what the issue between him and Trump is, Obama answered, “This all dates back to when we were growing up together in Kenya.” Later, taking a pre-written audience question, he fielded “What is the cure for Romnesia?” with “Obamacare covers preexisting conditions.” Reminded that Michelle had handed out fruit at last year’s Halloween, Obama said, “Michelle is serious about healthy eating. But it is an election year. So candy for everybody."