"Homeland's" Morgan Saylor: "I found myself in school the other day defending a terrorist" 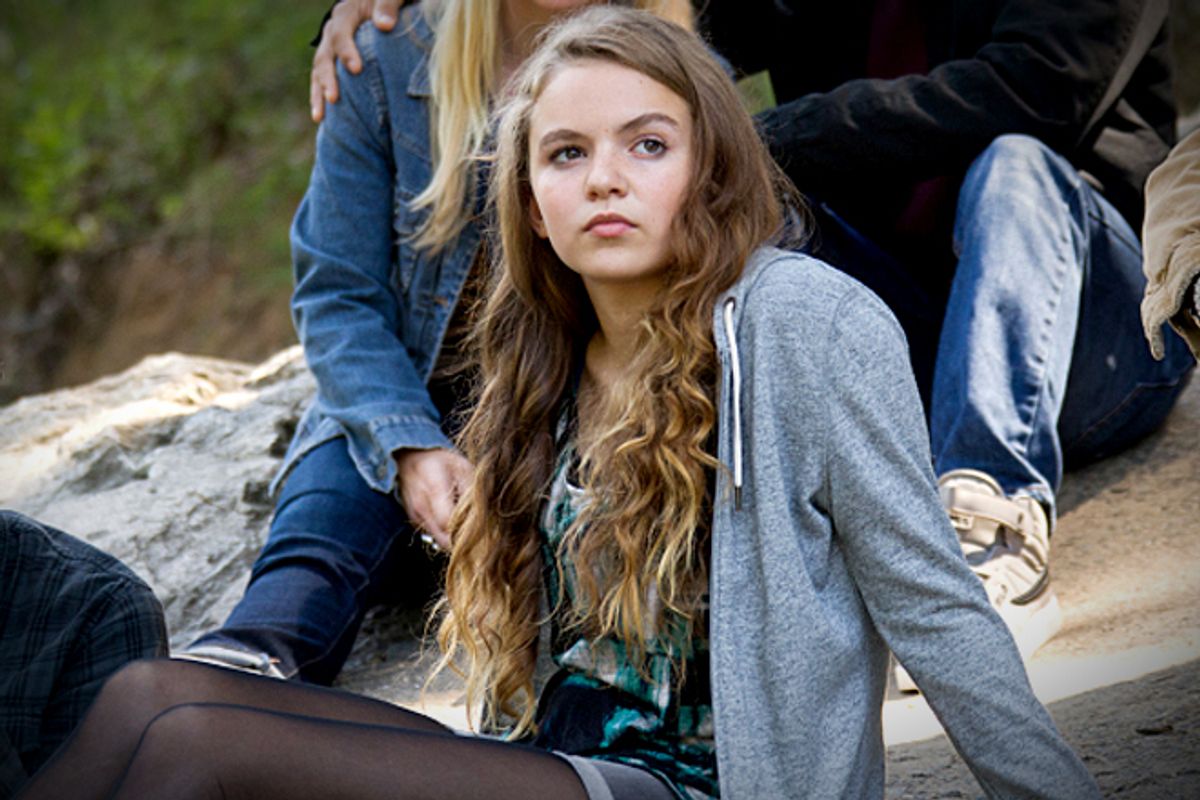 This season, Saylor's part has only gotten meatier: Dana has defended Islam at her posh private school, started to see her mother's side of things, and begun a sweet, surprisingly mature romance with the vice president's son.

Saylor, who is currently a high-school senior, spoke with me about Dana's "edginess,"  what it's like to talk to costar Claire Danes about "My So-Called Life," and the lengths she'll go to take AP Calculus.

Dana has grown up a lot.

Yeah, her dad coming home kind of matured her. In the beginning of Season 1, she was a little pot-smoking hooligan. And she has kind of cleaned up her act. She’s learned the realness of the world, and by the end of this season she really has learned even more about it. It’s just kind of a loss of innocence, I think.

Did your parents have any issues with you playing a pot-smoking hooligan?

I don’t know, they never really said. A lot of things I auditioned for around the time of “Homeland” were kind of that. I mean, not all of them at all, but I was probably — and I’m using air quotations here — one of the “edgier” girls at my agency in the suburbs of Atlanta. So I often got put onstage for that sort of thing. I remember, when we signed the contract — Showtime has a very liberal contract —  and we made sure we read it thoroughly before agreeing to it because of Showtime’s history of drugs and sex and rock 'n' roll and cursing.

Why do you think you’re good at being “edgy”? Are you an angsty teenager yourself?

[Laughs.] I don’t know if I’m as angsty as Dana, but my friends have said that I play myself on TV. I’m not as outright rebellious, I don’t think. But Dana and I share some similarities. I think she’s grown to be more like me as the season’s gone on.

Dana and Carrie have some parallels too. They seem like they’re the only characters who really see Brody, and know something weird is going on with him

I think there are a lot of parallels to Carrie. I don’t know if they’re purposeful or not. She’s a very intuitive, kind of extreme girl — woman. So some of their story lines follow in a similar way. There are some extremes of their emotions in the same episode. And there might even be a little Finn-Dana, Carrie-Brody overlaps, without giving too much away.

Have you seen “My So-Called Life”?

I watched it. A lot of my friends watched it before “Homeland,” but I watched it after. And one of the first things Claire said to me while we were doing the pilot, she came up and she talked about the fact that she was my age while she was doing it. And we talked about being a teenage actress and missing your real life and living with your mom 24 hours a week and being out of town. It was nice. It was nice to know someone else knew what it was like.

Hell yeah! It’s such a relatable teenage story, not even just for teenagers but for adults. And Claire is so phenomenal in it and there are certain faces she does now, that remind me sooo much of Angela Chase.

Do you go to her for advice at all?

Me, Morena [Baccarin, Dana’s mother on the show] and her are the only girls on “Homeland” so we have some girl talk. And they both share their past experiences, because Morena’s been acting for a long time too. She and Claire actually went to acting middle school together. They’ve literally been acting since the same time I have and they’ve taken different paths, done different things, but they’re both here and I’m here too and they have some wisdom and sage advice to bestow upon me. Like, Morena helped me pick out my Emmy dress. She knows what she’s doing and it’s really helpful to have someone I can literally ask anything, like a weird question.

Were you excited to have this romantic story line with Finn?

I remember I found out on an online forum my mom sent to me. I don’t know what it said exactly, like there would be a boy or something, but I got really excited. I’ve made really good friends with Timothy, who plays Finn. And it’s been really fun to have a teenager on set because Jackson, who plays my brother, is five years younger than me and last year my boyfriend Xander was 24, or something like that. Timothy’s 16 and it’s nice to have a companion.

Did you do any research to play Dana, about PTSD or Islam?

I didn’t really before we started, but I definitely found myself more interested because of it. I mean, obviously, it’s a big debate right now and a very, very modern issue, what’s going on in the Middle East and terrorism as a whole. I found myself in school the other day, where I literally defended a terrorist, because the article we were reading in class didn’t really mention what he had done. The article was about how certain criminals aren’t allowed to pray as a group, like in a very hardcore prison, because they were arrested for terrorist acts. And I found myself defending this guy and being like, “We don’t know what he did, we don’t know why he did it. Why can’t he look to his god for forgiveness or hope?” And everybody thought it was kind of weird.

Dana did exactly the same thing.

Yeah. I realized it after. My natural instinct was to look at it from the other side. I have been known to be a little outbursting in school and stuff.

How is it being in school and shooting a TV show?

It’s not that weird because not that many students have Showtime. People were psyched about the Emmys. A lot of people saw that. People I know but that I’m not really friends with, said, “I saw you on TV!” the day after the Emmys. They just saw me standing onstage from far away, but I’m also on a TV show every week.

Do you miss a lot of school?

We’re shooting from June to November, so I miss August to November, half the time. It depends on my shooting schedule. Episode 3 I only had two scenes, so I think that was all one day, but in [the next] episode I have a lot and I filmed like five days out of the eight that we do. AP calculus is my one hard class and I try to make it to that as much as possible. It’s a four-hour drive. I’ll work Wednesday and I’ll drive home Thursday morning to try and be there for that.

Do you want to go to college?

There are some parts I like about school. I like math a lot and I like physics. But I’m sick of school and I can't commit to a traditional school because I film until November. And I can't just miss half the classes.

Does that mean that you know if you’ll be on next season or not already?

I don’t, no. It really is up in the air. And I’ll apply to colleges, and probably defer them.

Have you always wanted to be an actress?

Kind of, I think. When I was really little it was like my summer camp of choice, but I don’t think I ever went up to my parents and was like: “I want to be on TV.” My parents don’t have any memories like that of some grand foreshadowing. But I liked it a lot. I grew up kind of in the country, in western Georgia. And then I moved a lot closer to Atlanta and I started doing plays and when I started doing film I think I really started to love it.

Now do you feel like, "I want to be an actress forever"?

Yeah, for sure. It’s so insane to me that this is my actual job, that I get to come to set and do what I enjoy doing and get paid for it.

Are you trying to do other things right now or are you waiting to graduate from high school?

This past month I’ve been able to audition for things that will film after “Homeland.” But I don’t know. It’s hard. There are certain movies that would be worth missing, like, prom for, but at the same time I miss my friends and I miss real life.