Fox News: Can we blame Sandy on Obama?

Amid the crazy commercials, conspiracy theories and Mittmentum, an afternoon watching Fox. It's almost journalism! 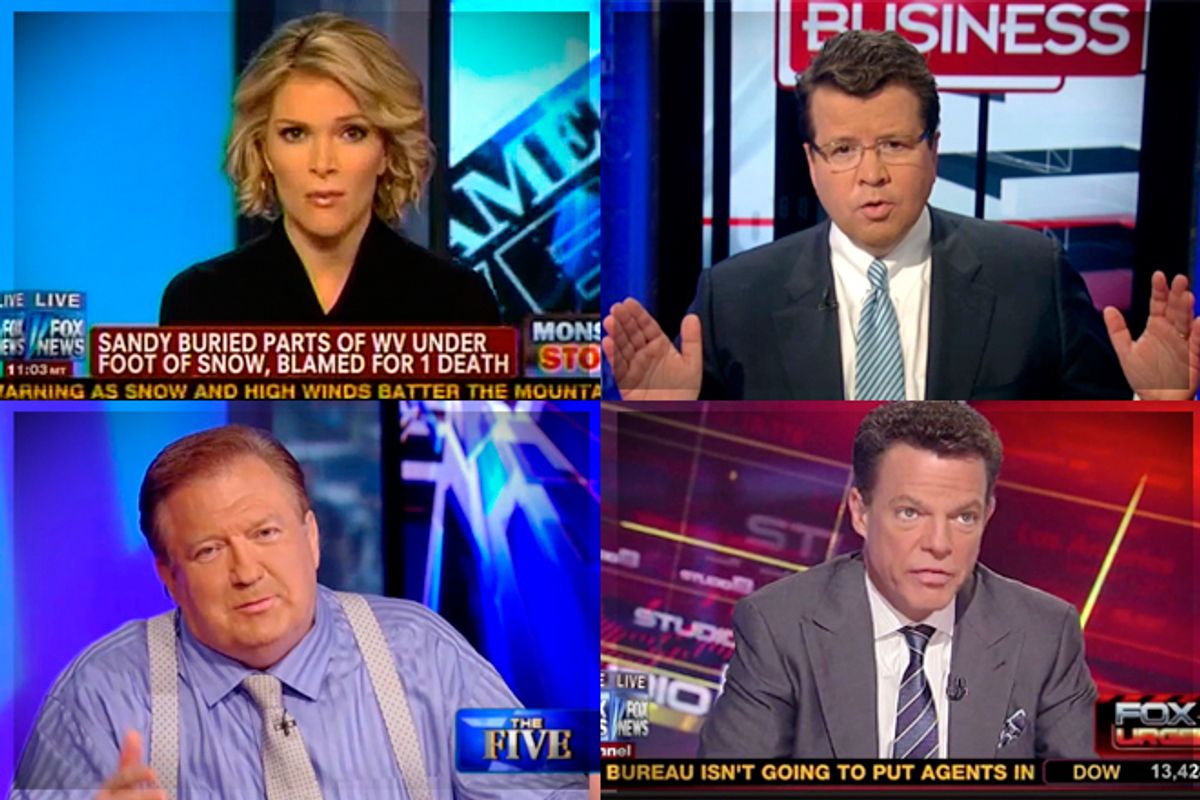 Watching Fox News all afternoon, on the day after Sandy made its devastating landfall along the Eastern seaboard, was like entering an alternate dimension — but not the one you’re thinking. No, this was the dimension where the unfocused anger, the slow-boiling subsurface paranoia that drives so much of the coverage on Roger Ailes’ news network, has miraculously drained away. Fox on Tuesday afternoon was not just a real news network as well as a genuinely “fair and balanced” one — it was actually a pretty doggone decent one.

One of the info-nuggets revealed in the bright yellow crawl across the bottom of the screen, sometime around 2:30 p.m. Eastern time, read like this: ROMNEY CAMPAIGN TOLD TO RAMP DOWN CRITICISM OF PRESIDENT OBAMA. Whether for moral reasons or purely tactical ones, that decision had apparently spread, top-down, throughout the Fox News operation. If the discomfort and difficulty of this undertaking was palpable at times, there are quite a few people, even at Fox, who are trained in actual journalism and can pull it off for short periods. So what we saw across Megyn Kelly, Shep Smith and Neal Cavuto’s successive afternoon shows was largely straightforward reporting on the damage in New York City and along the New Jersey shore, most of it handled with aplomb.

Veteran Fox reporter Rick Leventhal, better known for jingoistic flak-jacket stand-ups from Iraq or Afghanistan, trudged through the sand-choked streets of Point Pleasant Beach, N.J., describing the terrifying night he had spent there as the town flooded. Another reporter whose name I didn’t catch successfully intercepted New York Gov. Andrew Cuomo coming out of a limousine in lower Manhattan, just outside the entrance to the flooded Brooklyn Battery Tunnel. It was a cordial and entirely professional interview, even if Cuomo ducked the question — of great interest to me and several million other people — of when New York’s subways might reopen, and how much. (Partially, he said, and “over the coming days.”)

Only here and there did the bizarre, unbalanced combination of rage and illness that customarily animates Fox News and its audience poke through – and I’m mostly talking about the commercials. Dubious-sounding law firms from Waco, Texas, urging you to sue someone about your hip replacement; one-time “Knots Landing” star William Devane, piloting his private plane in a painfully awkward pitch for a gold brokerage (always the grumpy-Gus investment of choice); a stick-on portable light bulb – which you can see for yourself at InstaBulb.com -- getting the hard sell from some cheerful voice-over Australian. Basically, you can use the InstaBulb to illuminate your secret trove of gold bullion in the closet – but it’s so damn hard to get in and out of there after that botched hip replacement!

Here’s who was almost completely absent from Fox’s afternoon newscasts: Mitt Romney. Megyn Kelly, who appeared slightly cross at the prospect of avoiding harsh rhetoric, featured a few seconds of Romney at a reconfigured Ohio rally stripped of campaign signs, where he collected canned foods for storm victims in New Jersey and proclaimed that it was “part of the American spirit, the American way, to give to people who are in need.” Given that the arena looked nearly empty and the former Massachusetts governor was standing there with a few paper sacks of groceries and a handful of stoned-looking teenagers, it didn’t do much for perceived “Mittmentum.”

Then, at 3 p.m., Fox cut to the Red Cross headquarters in Washington for some statesmanlike remarks from President Obama, in his finest mode of sober gravity, or grave sobriety. It was probably one of his better campaign addresses. Obama made a somewhat conspicuous point of mentioning that FEMA officials and extensive stores of supplies had been ready in advance and were now being deployed. He didn’t wink at the cameras, or mumble anything about “check out what the other dude said about FEMA,” but he didn’t have to.

Kelly made a faint effort to bait veteran Republican strategist Ed Rollins and Democratic operative Susan Estrich into a fight over which candidate would look better in the storm’s aftermath, but those old campaign pros were having none of it. As Rollins observed, he and Estrich may disagree on politics, but they agree on tactics – and it’s crucial in this context for both Obama and Romney to appear above the fray. Estrich suggested that the one with the biggest bullhorn is likely to benefit most: “Public officials get to be public officials, and candidates have to be cautious.” Kelly wasn’t too fond of that direction, and went fishing for evidence that Romney is a fundamentally good guy, despite evil liberal calumnies to the contrary: “Isn’t it interesting to hear Mitt Romney call people to action, to help the storm victims? He has a long history of trying to help people in need.”

Kelly made a pretty big deal over the fact that Rep. Bob Turner, one of the few Republicans to hold elective office in the New York metropolitan area, lost his house in the horrific fire that destroyed some 80 homes in Breezy Point, an exclusive neighborhood of Queens, N.Y. But, honestly, you can’t argue that isn’t a real and rather pathetic story; Turner’s had a pretty bad year. He served a truncated term as the surprise winner of disgraced Rep. Anthony Weiner’s seat, but has since been redistricted out of office and failed to win the GOP nomination to run against Democratic Sen. Kirsten Gillibrand (admittedly a losing proposition). So the guy’s brief political career is over, and now he has no house.

During the 3 o’clock hour, Shep Smith stood in front of a giant map and tried to raise gigantic but vague philosophical questions raised by Sandy: “Do we have to reassess everything we know?” Yes, Shep, we do, or perhaps you do. By the time Neil Cavuto’s show began an hour later, professional neutrality started to fade and the tone of generalized sourness began to leak through the pores of my TV. Cavuto and Fox Business reporter Charles Gasparino got in a mock-acrimonious and extremely unfunny dispute about whether the New York Stock Exchange should have stayed open for business during the storm, with Cavuto accusing Gasparino of only caring about the “almighty dollar” and the latter daringly calling Con Edison, New York’s struggling utility company, a “dopey company.”

It was no doubt a relief for Fox’s proprietors and viewers to lurch, very suddenly, back to business as usual with “The Five,” the terrifying 5 o’clock panel show that features right-wing attack dogs Greg Gutfeld (in a blinding yellow sweater) and Kimberly Guilfoyle (who might have been made up for Halloween, except that she always looks like that) ganging up on token liberal Bob Beckel. They all made some obligatory mumbles about the terrible storm and the bravery of first responders, with a few asides about how “presidential” New Jersey Gov. Chris Christie looked. (Is that a dig at Obama, though – or at Romney?)

Then the group started discussing how disgraceful it was that the Obama administration deliberately left Americans behind to die in Benghazi, and that it was so true that Chrysler’s Italian owners were planning to outsource Jeep production to China (which somehow or other was also Obama’s doing). So the world was very nearly back on its axis, except for the disconcerting split-screen effect that showed us the swamped streets of Ocean City, N.J., on one side, and incoherent Benghazi-Chrysler lies on the other. And then some bullet-headed, shifty-eyed guy showed up to tell me that “silver is the most affordable precious metal,” like that was supposed to be a good thing.