Who rocked the hurricane? The Weather Channel

All the 24-hour-news networks became weather channels today. But only the Weather Channel knew how to cover it 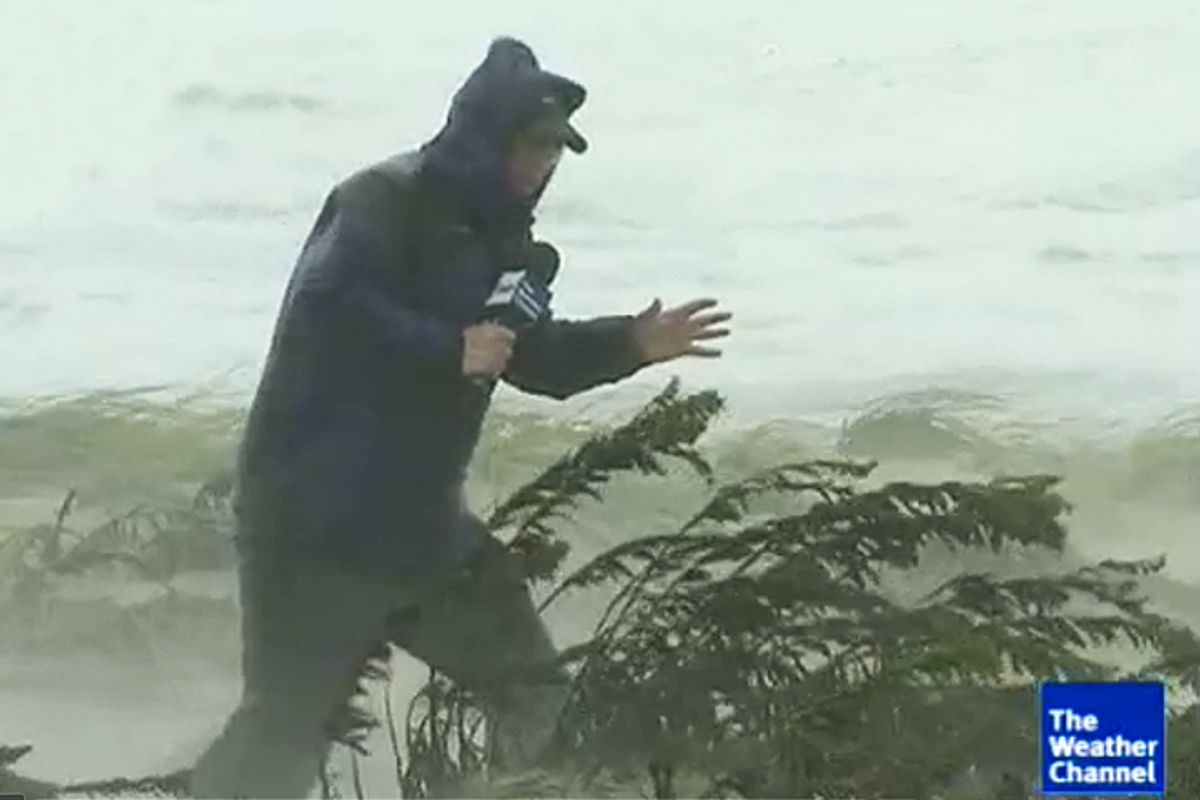 Hurricane Sandy is just coming ashore, which means we have been living through a 24-hour news cycle that amounts to running-in-place news. Around 5:20 p.m. on MSNBC, a very wet reporter standing down in Battery Park told Chris Matthews that there is for sure going to be flooding tonight— which is exactly what the person standing down in Battery Park said last night, the only difference being that person was not getting rained on. As a public service — like, a service that tells people what they need to know for their health and safety — one TV network broadcasting updates every 10 minutes would suffice. That is clearly not what is happening. Everything else that is happening — the endless chatter, the reporters performing their commitment to their job in increasingly bad, dangerous weather — is just for show.

But once you accept the fact that the 24-hour-news networks — which all of the major networks have turned into for the duration — are not performing a public service, we can begin to evaluate them on a whole other scale. That scale being: Which was the most fun to watch today, while you were stuck at home, carefully heeding all the news networks' advice not to go outside? On this score, there was a clear winner. Let me break down the contenders.

First up, but not victorious: NY1. Sandy is the sort of news event that New York's local cable channel usually excels at, a disaster that deserves comprehensive, flood-the-zone (pun lazily intended) coverage. It did not disappoint today, exactly. It’s just that its sort of relatively no-nonsense, levelheaded approach to an ongoing disaster was relatively no-nonsense and levelheaded. Yes, the news anchors talking to the crane expert all but forced him to say things were going to turn horrific, but by and large, there were lots of weather updates and outdoor footage in the streets of Queens where nothing that horrible was happening. Where were the reporters leaning into the wind? Why wasn’t the news conference from a leading government official interrupted to show said people leaning into the wind? Why wasn’t weather guy Jonathan, who is going to be wearing his blue shirt for, like, 64 hours, freaking out?

On the other end of the spectrum was MSNBC, which more or less refused to let us forget the election was going on. Fox News was actually running less politics than MSNBC. CNBC talked less about finances than MSNBC talked about electoral politics today. What is a hurricane but an excuse to pretend politics don’t exist (for those of us who would like to pretend politics don’t exist)? MSNBC, of all the networks, kept trying to bring it back to the election, even airing their regularly scheduled news-discussion program for a few minutes this afternoon. This is not the sort of grandiose, respectful treatment a hurricane deserves. MSNBC is disqualified.

Fox News, meanwhile, loses for being unmemorable. Nothing distinguished its coverage, which was a little Shep Smith rabble-rousing and way too many Doppler pictures. Inessential. CNN gets tossed for most willfully putting its reporters in danger. A CNN reporter was standing in a foot of water at an intersection in Atlantic City for hours. He finally walked away, to safety, after the power went out at that intersection. As he waded back, while the channel was cutting to commercial, it was revealed that three feet from where he had been wading for hours he could stand on asphalt (and also that guys could streak behind him and come to no harm). Atlantic City is obviously in a bad way right now, but what nonsense showmanship.

This leaves — as one might have predicted – the Weather Channel. Of all the networks, a storm like this is the Weather Channel’s brief and it showed. While other networks were showing us yet another reporter at the Battery, the Weather Channel would cut to the snowstorms in West Virginia (crazy snow there!). Al Roker was out in the rain getting blown around the Jersey shore this morning, hours before any of the other networks could come up with a good visual. Even better, Roker's been out of harm's way for hours and hours since then. Keen to pass on news, updates and press conferences, the Weather Channel also flashed some idiotic personality: Today’s highlights include flirtatious banter between colleagues in wet suits and an anchor calling Con Ed “coned.” For a combination of not-that-dangerous entertainment, the information you need and some idiosyncratic foibles, the Weather Channel wins the past 24 hours. On to tomorrow.