I'm with Bloomberg: the New York City Marathon must go on

Critics are blasting the choice to press on with the race just days after Sandy. Here's what they're missing 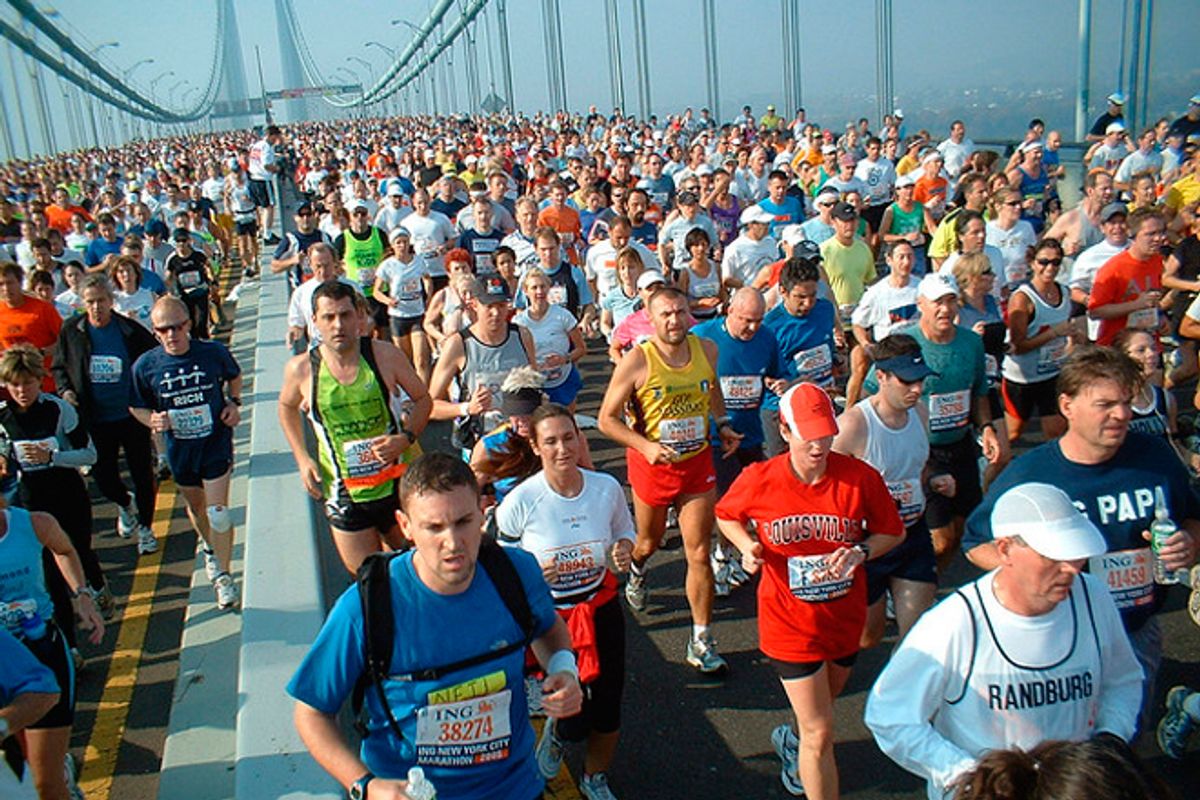 What does a city do after one of the most devastating, destructive and tragic events in its history? It shows the world how to run this town.

On Sunday, Nov. 4, the ING New York City Marathon will go on exactly as planned, a mere six days after Hurricane Sandy delivered an unprecedented pummeling to the city. Mayor Bloomberg said, "It’s a great event for New York, and I think for those who were lost, you’ve got to believe they would want us to have an economy and have a city go on for those that they left behind." This is, depending on your perspective, either an insensitive waste of energy and resources or a powerful declaration of resilience.

I'm firmly in the latter camp. Assuming I can figure out how, in our still wildly messy transportation system, to get down to Staten Island early Sunday morning, I will be there at the starting line. Well, technically I'll be somewhere far back from the starting line, in the slow people's wave. And let me tell you, I was emotional about this thing well before the hurricane. So if you're watching the event this weekend, just look for the redhead in the back, sobbing her way through 26.2 miles.

As someone who lives in the city, I knew even before Sandy hit that I would have the luxurious flexibility to work around whatever plans or change of plans to the marathon the storm might bring. Whether the event was moved to the spring or shelved till next year or, as it has turned out, set to go on exactly as planned, my own logistical concerns would be relatively minor. I also knew, as Sandy wreaked her havoc over the entire East Coast, that she was going to drastically change a lot of plans.

But I've been nevertheless surprised, as I've followed the post-Sandy news about the marathon, to see such a significant amount of backlash and negativity directed at the effort to move forward with the event – and the runners who still want to participate. For starters, from a purely practical point of view, how great, economically or spiritually, would it be to cancel the event when so many runners have already traveled here to attend, when so much effort has already been devoted, over months and months, into getting the event off the ground?

Yet the Associated Press asked Thursday whether the plan was "Inspiring or inappropriate?" because, as a coach quoted in the piece suggested, "It pulls resources and focus away from people in need." On ESPN, runner Mario Fraioli declared he was 86-ing his plans to attend, and said, "The New York City Marathon does not need to happen this Sunday. There are more pressing issues that rightfully deserve the city's attention, energy and limited resources … Canceling the race isn't about being unfair to the runners -- it's about being fair to a city and its residents that need every available resource to put itself back together, and for this reason, the show mustn't go on." And the New York Times comments section has been filled with remarks from those who say, "It is very puzzling that we are even entertaining the idea of having an event that in the grand scheme of things is really inconsequential," "It's absolutely insane to let the marathon go forward" and simply, "It's only a sports event."

Believe me, you don't have to tell me about how a catastrophe can change your plans. After two cancer diagnoses in the past two years, I can assure you I am great at reconceptualizing both the long- and short-term future, and adjusting accordingly.

Similarly, the race organizers are doing what they can to make allowances for a very unusual set of challenges Sandy has now created. Several pre-marathon events have been canceled, and runners unable to participate this year will be eligible for guaranteed entry to the 2013 race. The marathon is now relying heavily on volunteers, so as not to drain the city's resources. And significantly, the race is now promoting the Mayor's Fund and Hurricane Sandy relief efforts.

I understand and respect the decisions of the runners who've chosen not to participate this year, out of a sense of honor for the victims of Sandy and the immense recovery still in progress. I also ache for those who wanted to make it here this Sunday, who trained so hard, who can't get to New York now. But to those who'd criticize the rest of us, and who question the wisdom of going on as planned, may I humbly suggest you back off? There are roughly 45,000 registered marathon entrants this year. Every one of them has a unique story and a personal reason for being there. I'll just give you a bit of mine.

After my surgery last year, when my doctors had to scrape out a bit of my lung to remove a malignancy – and confirm there was more cancer still in there – my running became my greatest connection to that diseased lung of mine. In the months that followed, as I pushed through the exhausting rigors of a clinical trial, I told myself that as long as I could put on my sneakers and go for a run in the morning, I was going to make it. When I came through the main part of my treatment cancer-free, I knew almost immediately that I wanted to mark the milestone by running the New York Marathon for Gilda's Club, the organization that has been such a beautiful source of strength and support for my family and for thousands of other New Yorkers living with cancer. That's why I wanted to do this.

And now that run has an even deeper resonance. Because on Sunday I'm not just running to affirm my survivorship and fundraise for a cause I passionately believe in. I'm running to put my feet in all five boroughs of this wounded city I love with everything in my heart. I'm running to be out among my friends and neighbors and my children. As a friend who's run the marathon in the past told me this week, "Think of how proud you will feel on Sunday as a New Yorker, running in the greatest city in world, living proof that nothing, not Osama bin Laden, not Hurricane Sandy and not even f'ing cancer can keep this city or her people down."

Now multiply my one little story by tens of thousands of runners and spectators, each one with a special reason for being there. That doesn't diminish the tragedies of Sandy or the desperate need for relief effort right now. But it's not "inconsequential" either. The marathon is, as the race organizers say, "a symbol of the vitality and resiliency of this city." And like a distance runner, no matter how battered or broken we are, if the choice is to go on or not go on, New York almost always chooses to go on.