Jimmy Kimmel: Not everyone in Hollywood is a liberal

Jimmy Kimmel says his show has conservative writers, aims to make fun of both sides and can't resist a dog joke 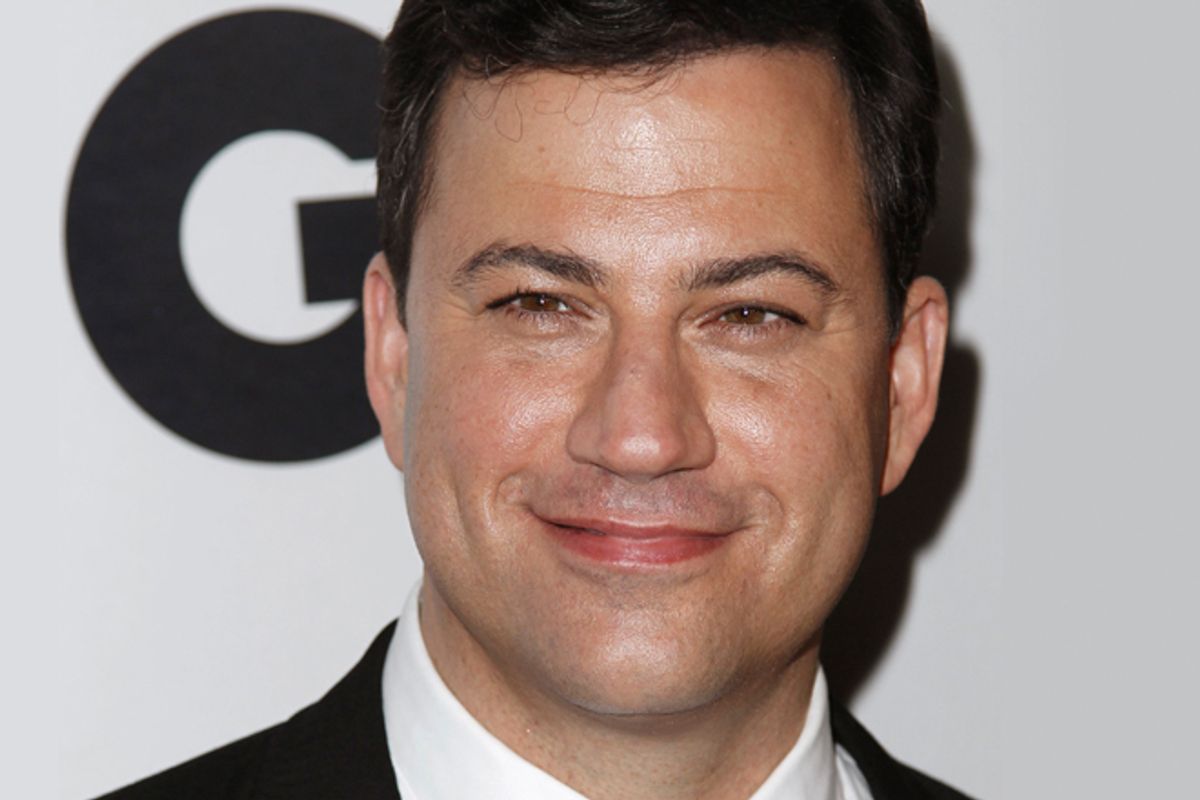 The presidential election will end one way or another on Tuesday. Most Americans will be relieved to be done with the uncertainty and the attack ads, but there are a number of professions that will find themselves at a loss: pundits, political writers, losing candidates and late-night hosts among them. For months and months, late-night TV has gotten to gorge itself on the intensity and inanity of the election cycle and its bottomless helpings of gaffe upon gaffe.

How have they feasted in a non-partisan manner? And what will they eat when it's over? As we approach the election's resolution, Jimmy Kimmel answered such questions. In the lobby of BAM's Harvey theater in Brooklyn, where he was taping a stand of shows the same week that Hurricane Sandy arrived, Kimmel spoke about covering the election, staying balanced -- and why political dog jokes are always funny.

I wanted to ask you some questions about the election …

About the election? Oh, I don’t want to do that. I just hate that stuff.

Not like who you’re going to vote for, but [what it's like] making the show in election season.

All right, ask me the questions.

Is it hard to strike a balance between what’s funny and what’s partisan?

It is a challenge. Like we had the first lady on, so we had to make sure we offered a spot to Ann Romney, because we want to be fair. She didn’t take us up on it, but definitely that’s part of it. And people think everyone in Hollywood is a liberal, and it’s not really true. You have certain members of your writing staff that are conservative, and they write from their point of view. And of course the majority of them aren’t, and they write from their point of view. My job is to try and keep it balanced.

You did a sketch at one point with Matthew Fox playing Mitt Romney in “The Dockers of Destiny” that seemed sort of exactly like a political sketch that is not sharp-elbowed at all.

Well, that specifically ... I’ve always marveled at the fact that Matthew Fox looks a lot like Mitt Romney, and I’ve wanted to do something Mitt Romney–related with him for a long time. But I think when people are looking to attach a partisan label to something, it’s very easy to do that. But really I don’t care about any of that. I just want to put funny bits on the air.

You’re a very straightforward guy. Is it difficult not to say whatever you want about this stuff?

I do say whatever I want. I just try to keep in mind that mine is not a political show and that our audience is split half and half, and people are very emotional about this stuff. And I just try and spread the ribbing around.

Is this a fun time of year for you and the writers?

It is. This is something I was just saying to the writers the other day: When the election is over, there will be a bit of a vacuum for us because there’s so much material that comes out of it every day, day after day. When it goes away, you have to readjust, and sometimes that’s hard to do.

Has there been anything in particular that’s happened this election cycle where you’ve just been like, this is a gift from the comedy gods.

There have been a few things. The dog on top of the car and then the eating of the dog. Dog related things are always funny. Another thing, when Mitt Romney sang “Who Let the Dogs Out” in front of a group of black voters, that was fun. Any time anyone does something stupid. Luckily most of it seems to be on videotape, and we’re just delighted, no matter which side it comes from.

The longer you do this job, the more of an insider you become. You hosted the White House Correspondents Dinner this year. Does it make it harder to make fun of politicians when you know them?

It really doesn’t. I think everybody knows what the deal is when it comes to politics. I think it does matter more in Hollywood. If you have a friend who’s a celebrity who is in a terrible movie, you will be less inclined to make fun of them. But in politics, I think everyone’s fair game.