Yes, he could still lose. But he could also end up with almost as many electoral votes as he won in his 2008 rout 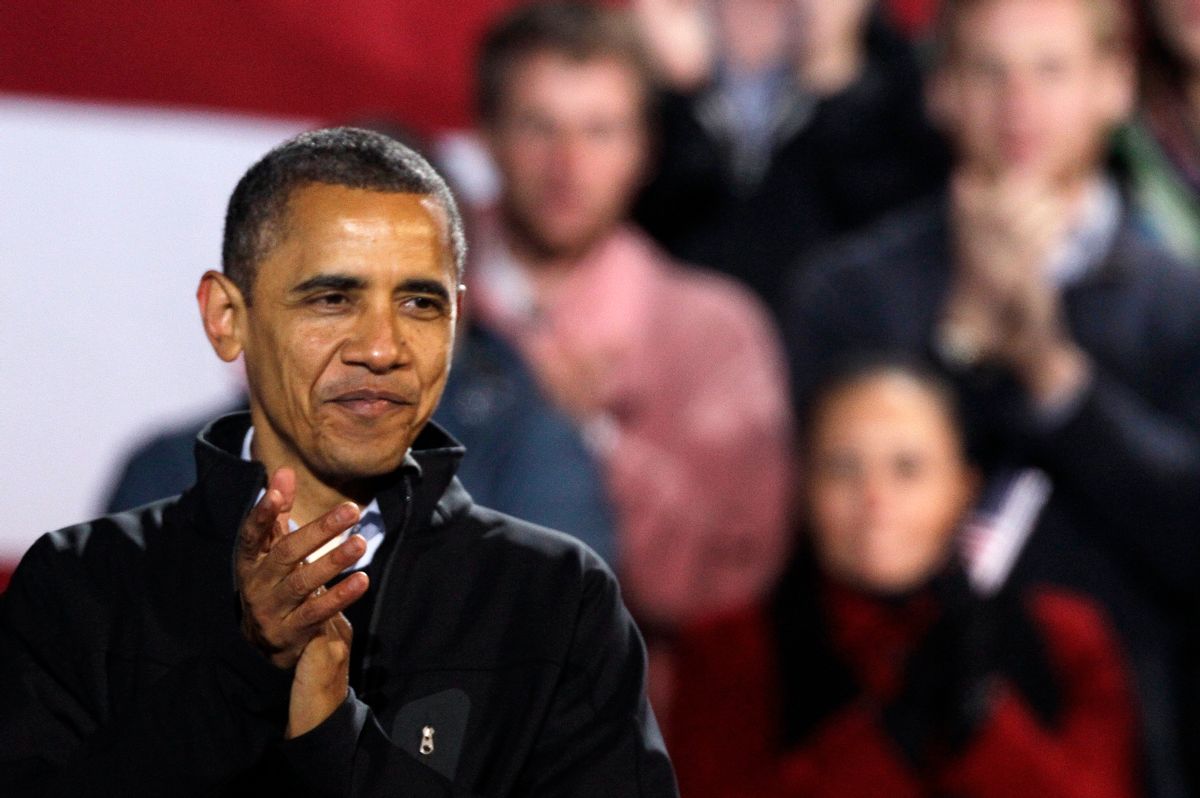 President Barack Obama applauds at a campaign rally at the Community College of Aurora, in Aurora, Colo. (AP/Brennan Linsley)
--

It’s definitely possible that Mitt Romney will be elected president on Tuesday. And there’s also a chance that Romney will fall short in the Electoral College but still receive more popular votes than Barack Obama, an officially meaningless achievement that would nonetheless let Republicans claim that Obama had been rejected by the majority of voters and had gained a second term only through a constitutional quirk.

But another possibility has come into focus in the race’s closing days: a clean Obama victory, more thorough and sweeping than just about anyone expected.

Romney’s path to 270, as I wrote last week, can be split into two phases. The first requires him to sweep five traditionally Republican states that Obama won in 2008: Indiana, North Carolina, Florida, Virginia and Colorado. Do this (and hold onto all of the other states that John McCain took in ’08) and Romney will have 257 electoral votes. From there, he could win the election by taking Ohio, or Pennsylvania, or some combination of Wisconsin and New Hampshire, Iowa or Nevada.

In other words, a lot has to go right for Romney if he’s going to win on Tuesday. And the best indicators available – multiple polls from all of the contested states – suggest he’s not going to get the breaks he needs. Consider how the race now stands in that first bloc of states that Romney must win on Tuesday. Indiana is in the bag for him, and hasn’t been seriously contested by either party, but the other four are all tight. As of this writing, the Real Clear Politics polling average shows:

These states are all winnable for Romney, but they’re also winnable for Obama. That they’re this competitive on the eve of Election Day is somewhat surprising. After all, the national horse race is basically dead even, down from the 7-point margin that Obama enjoyed nationally in ’08. If his support had fallen by that same level in North Carolina, Florida and Virginia, those states would be safely in Romney’s column now. (Colorado, which Obama won by 9 points in ’08, is a different story.)

What’s kept Obama in the game in these states is demographics. In Florida, for instance, a rising non-Cuban Hispanic population and an increase in the number of African-American voters have helped offset erosion Obama has suffered with other groups of voters. And in North Carolina and Virginia, as Nate Cohn has pointed out, Obama wasn’t that reliant in the first place on support from white working-class voters, a demographic group that has abandoned him in large numbers nationally.

It’s not hard to imagine Obama picking off some of these Romney must-win states. He’s actually ahead (barely) in Colorado, practically tied in Virginia, slightly behind in Florida and within striking distance in North Carolina. If there is stronger than expected turnout among Obama’s core groups, particularly black and Latino voters, it could boost his position. There’s also the issue of the ground game, with Obama’s campaign better organized than Romney’s; this could potentially pad Obama’s tally in these states, and elsewhere. It’s also conceivable that Obama’s response to Hurricane Sandy, which received loud public praise from one of Romney’s top surrogates and resulted in a surprise endorsement from Michael Bloomberg, could cause a small but significant shift in his favor at the last minute.

This creates the possibility of a sizable victory for Obama. Currently, he’s favored in all of Romney’s phase two states. If he wins all of these states – Ohio, Wisconsin, Iowa, Nevada, New Hampshire and Pennsylvania – he will have 281 electoral votes. The more he then eats into Romney’s phase one states, the higher that number will climb. Win Colorado, and Obama would be at 290. Add Virginia and he’ll be at 303. Throw in Florida and he’s at 332. And if he could somehow grab North Carolina too, he’d be at 347 – not far off the 365 he secured four years ago.

If Obama does win some or all of Romney’s must-win states, it will probably mean he’s performing better than expected in the national popular vote too. Right now, the Real Clear Politics average has him up by 0.5 points nationally, which is actually a slight improvement from a week or two ago. One factor that may be weighting down Obama’s national standing is markedly lower enthusiasm among Democrats in safely blue states, a problem that could be exacerbated by Sandy, which hit the Democratic-friendly Northeast. But if Obama has gotten a small post-storm bounce or if his ground game delivers, it’s conceivable he could win the popular vote by a few points.

Again, this shouldn’t be taken as a prediction of an Obama landslide. It’s unlikely he’ll take all (or most) of Romney’s must-win states, and there’s always the possibility that the state-level polls that have been so friendly to Obama lately are flawed and that Romney is on the verge of victory. Plus, the term “landslide” is relative; if Obama were to win, say, 332 electoral votes and beat Romney by 2 points nationally, it wouldn’t exactly measure up to the Reagan ’84, Nixon ’72 and Johnson ’64 triumphs.

But Obama has been seen as politically imperiled since early in his presidency, and was in genuine danger of losing to Romney in the middle of October. Right now, conventional wisdom holds that he’s probably going to scrape out an Electoral College victory and (if he’s lucky) a narrow popular vote one as well. In that context, a 2- or 3-point national win with well over 300 electoral votes would feel a lot like a landslide – the kind of unexpectedly strong performance that the political world might even regard as a mandate.