Still want to fight a war on women?

Elizabeth Warren and Tammy Baldwin win; Akin and Mourdock are defeated. But it's no time for women to be complacent 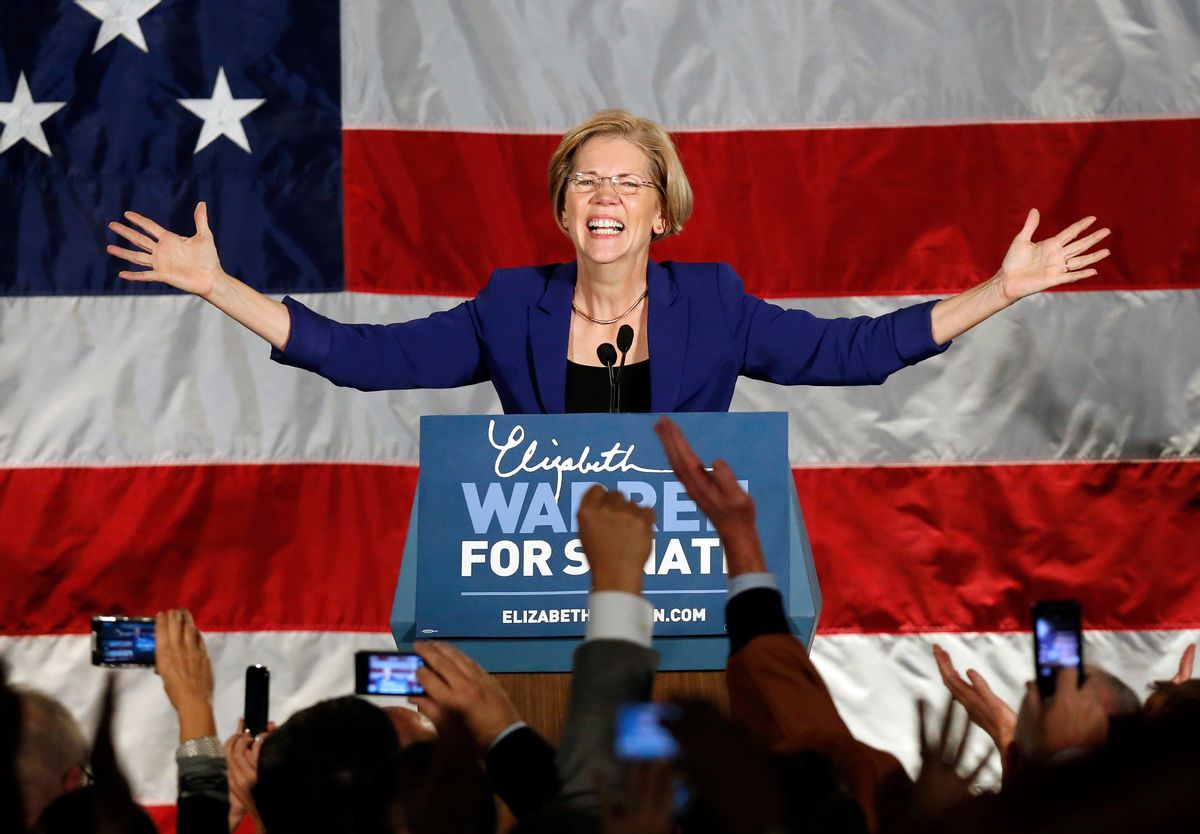 A couple of weeks ago, three words were projected on the U.S. Capitol by a feminist group: "Rape is rape." It was momentous, but only to a point.

After all, by then President Obama had already repeated that feminist mantra rejecting a hierarchy of rape: In August, he'd announced that "Rape is rape" in response to Todd Akin's blithe invocation of "legitimate rape." Three days after the words appeared on the Capitol, Indiana Senate candidate Richard Mourdock's talk of rape and God's gifts gave the president occasion to say it again. Rape is rape. You could complain that this was still being debated in 2012, and many did, but why would profound disruption come fast or easy? No, it was an urgent dividing point, and the president himself had chosen a side.

Today, Obama is still the president, thanks to being the choice of an overwhelming margin of women, after (for the most part) not backing down, or away from, reproductive rights and women's autonomy. A dazzling change achieved last night after years of hard work is the unprecedented wave of women elected to office, many of whom, like Elizabeth Warren and Tammy Baldwin, are strikingly progressive. Instead of projecting words asserting women's rights outside the Capitol, these women will be asserting them inside. It appears there could even be 20 women senators.

Today, Akin is gone. Mourdock is gone. Rep. Joe Walsh, R-Ill., who said an abortion could never save a woman's life, is gone. Tom Smith, who said that his daughter having a child out of wedlock was as bad as if she'd been raped, is gone. Republican women who were variously wielded as proof against the party's misogyny, including Michele Bachmann (who narrowly held on to her seat) and Mia Love, mostly did not do well. Their recent foremothers, Sarah Palin, Sharron Angle and Christine O'Donnell, are mostly forgotten.

This is still a country divided on abortion, but it is also an electorate that has fiercely rejected an antichoice agenda of banning it outright, limiting access to contraception, pushing certain contemptuous and paternalistic abortion restrictions, and evincing a lack of compassion for women's lived realities, including sexual assault survivors and women who depend on Planned Parenthood and Medicaid. It's an electorate that, broadly speaking, took a look at where the antichoice "incremental strategy" was heading and turned the other way.

Surprisingly enough, the blueprint for all this was laid exactly a year ago, in Mississippi. Not usually a bellwether state, Mississippi was where people who saw more "personhood" in a minutes-old fertilized egg than in a sentient woman thought they could become slowly inevitable. They were wrong, not because abortion had become less stigmatized in that reddest of states, but because it was suddenly clearer that it wasn't just those other women who would be restricted -- that being a "good girl" didn't mean your autonomy was any less fragile. A grassroots uprising helped beat Personhood, and this year it was nowhere to be found. A few months after the Mississippi win, the treatment of the decorously on-message Sandra Fluke would doubly prove that point: You could play by all the rules you were supposed to, but a woman in public disagreeing was still a slut.

Recognizing those hard lessons, women earned today's celebration. But it is, of course, just the beginning of a path that includes undoing a whole lot of damage and calling in a whole lot of return favors; just because the Democratic party is no longer running scared from reproductive rights and the Republicans face some grim truths on them doesn't mean anyone should get complacent about the way forward.

I once heard Ruth Bader Ginsburg quote her husband -- a feminist ally before there were very many -- saying that "the symbol of the United States really isn’t the bald eagle. It’s the pendulum.” That day last February, Ginsburg was answering my question about her remark that someone like her, who'd made her name unapologetically fighting for women's equality at the ACLU, could never be confirmed for the court today. She was saying she thought it could swing back to bipartisan comity, but she might as well have been talking about the cycles of progress and backlash for women in this country.

This year, in an election mostly silent on the Supreme Court, Ginsburg exercised a sort of talismanic and terrifying power: Over sympathetic people who feared her death in the event of a Romney presidency, but who also found inspiration in her steely resilience. (This superhero-like scolding was still going viral even after the polls closed.) More importantly, she's also probably the most significant believer that reproductive rights are guaranteed in the constitution, not by dint of privacy but as part of guaranteeing women's equal citizenship -- something that would have far-reaching consequences if more powerful people believed it.

Maybe that's not such a fantasy. Speaking at Barnard's commencement this year, Obama struck a similar note. The constitution, he said, “had its flaws — flaws that this nation has strived to perfect over time. Questions of race and gender were unresolved. No woman’s signature graced the original document.” But, he added, “What made this document special was that it provided the space — the possibility — for those who had been left out of our charter to fight their way in. It provided people the language to appeal to principles and ideals that broadened democracy’s reach. It allowed for protest, and movements, and the dissemination of new ideas that would repeatedly, decade after decade, change the world — a constant forward movement that continues to this day.” That struggle to make room for all of us is not always so linear, or so regular as a "constant forward movement," but last night, we got a little closer, by fighting.