Brian Williams throws the worst possible insult at The Donald, who promptly melts down on Twitter -- again 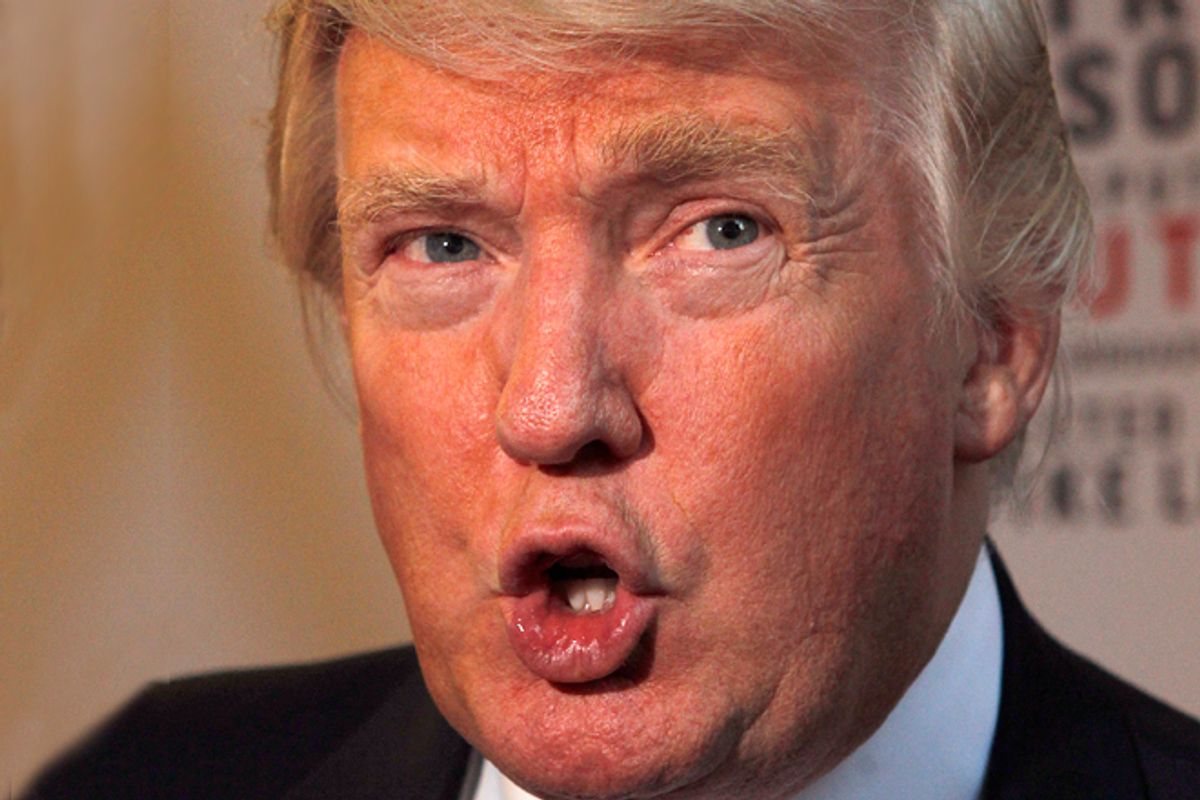 Tuesday, Nov. 6, 2012, will go down in history as a great day for America. Not just because Barack Obama was elected to a second term, or because Tammy Baldwin became the first openly gay senator in American history, or because of the strides made toward marriage equality in four states, or because a bunch of old men who want to take away your right to reproductive choice were sent on their way. That was all awesome, for sure. But it was a great day because it may well have been, after numerous false starts, the real beginning of the end of our long national nightmare known as Donald Trump.

We've tried covering our ears and going "Lalalalala I can't hear you!" for years, but he's always somehow still been here, horking out his bile. The thing about a guy like the Donald is that he's so big, so loud, so shamelessly gaudy that he's cleverly managed to make a whole career out of being terrible. Whether he's bulldozing his way through the wilds of Scotland's coastline or kicking Gary Busey to the curb, he's always managed to skate around the issue of his own repulsiveness by making that somehow his thing. He has almost 2 million followers on Twitter, and you just know at least half of them are hate follows.

In recent months, however, the perennially windswept blowhard has passed through the Rubicon. Sure, just a few weeks ago, Trump and his coterie of has-beens announced the new lineup for the next season of "The Apprentice," and you certainly couldn't say he lacks for attention. But his Horrible Boss persona has deteriorated into something beyond the limits of even his own grossness. There's no swagger left. Just empty, flailing meanness.

Take, for instance, his ludicrous "October Surprise," in which he promised something really big and then dangled the promise of $5 million to Barack Obama's favorite charity if the commander in chief would cough up yet more documentation of his authenticity as an American. Trump's birther routine was insulting when he crawled down that rabbit hole of paranoid racism long ago, but in the final days of the presidential campaign, to bark a demand at the president of the United States seemed just plain silly.

And then, after Hurricane Sandy, when he had the audacity to double down on his ridiculous imaginary game of cat and mouse and tell the world, "Because of the hurricane, I am extending my $5 million offer for President Obama’s favorite charity until noon on Thursday," he went from looking like just a delusional kook to full-on blatantly insensitive to the victims of his own storm-shattered city. By all means, dude, say that you've got $5 million to blow, not on hurricane relief, but a petty weird dare that you know no one will call your bluff on. Because that doesn't make you look bananas at all.

And then it was Tuesday, Election Day. That's when Mr. Trump really went into high dudgeon. Not funny Twitter crackpot mode, we're talking full-fledged tweeting like a man wandering around the penthouse with a bat mode. No one would have expected the Romney supporter to take an Obama victory with anything resembling class, but Trump went extra-supersize cuckoo for Cocoa Puffs, tweeting, "This election is a total sham and a travesty. We are not a democracy!" He added, "Let's fight like hell and stop this great and disgusting injustice! … We can't let this happen. We should march on Washington and stop this travesty … More votes equals a loss … revolution!"

The Trump's full tirade didn't last too long, though. As my friend Jeffrey McManus noted very soon after, "Somebody must have informed Donald Trump of the legal definition of treason because he just deleted a few tweets." NBC's Brian Williams also took note of the meltdown, telling viewers, "Donald Trump, who has driven well past the last exit to relevance and veered into something closer to irresponsible here, is tweeting tonight." He then read off some of the choice bits from Trump's Twitter feed, punctuating the report with a dry, "So that happened."

Unsurprisingly, Trump, thrilled that someone noticed him, has spent his Wednesday waging a one-sided war against Brian Williams. Best part of his litany of "Come at me, bro" tweets to Williams? This: "bwilliams hasn't tweeted yet." Trump's also busily continuing to spout nonsense like, "It's freezing and snowing in New York — we need global warming!" Yes, because it's been, like, nine days since we've had a really huge catastrophe.

What sticks in Trump's craw right now isn't that Williams dissed him — hell, Trump eats up that crap. It's not even that he called him irresponsible. It's that a public figure, on the news, called him out as exactly what he is. Irrelevant. Pointless. A tantrum-tossing, D-list reality show bore. Which, for a man who fancies himself so very big, so very important, has got to sting on the same day the prize bajillionaire pony he thought would buy the presidency and then be inviting him to future Kennedy Center Honors didn't get elected. That's got to smart. If only anyone cared.

One day, you're the king of the world in a golden skyscraper. The next, well, you've still got your golden skyscraper, but you're a washed-up guy from a TV show. You're Victoria Jackson and Ted Nugent – Twitter sideshows, to be sure, but utterly powerless. Trump is, for all his gold and marble, really not so different from the man I saw screaming on the crowded 1 train the other day, shortly after the subway service had resumed. Angry. A little scary. But, in the weirdest way, utterly invisible. And ultimately, just the background noise of the real conversations going on all around him, yelling over them, but participating in none of them.