Knope finally meets the man of her dreams. Here's why the vice president is worthy of her (and our) love 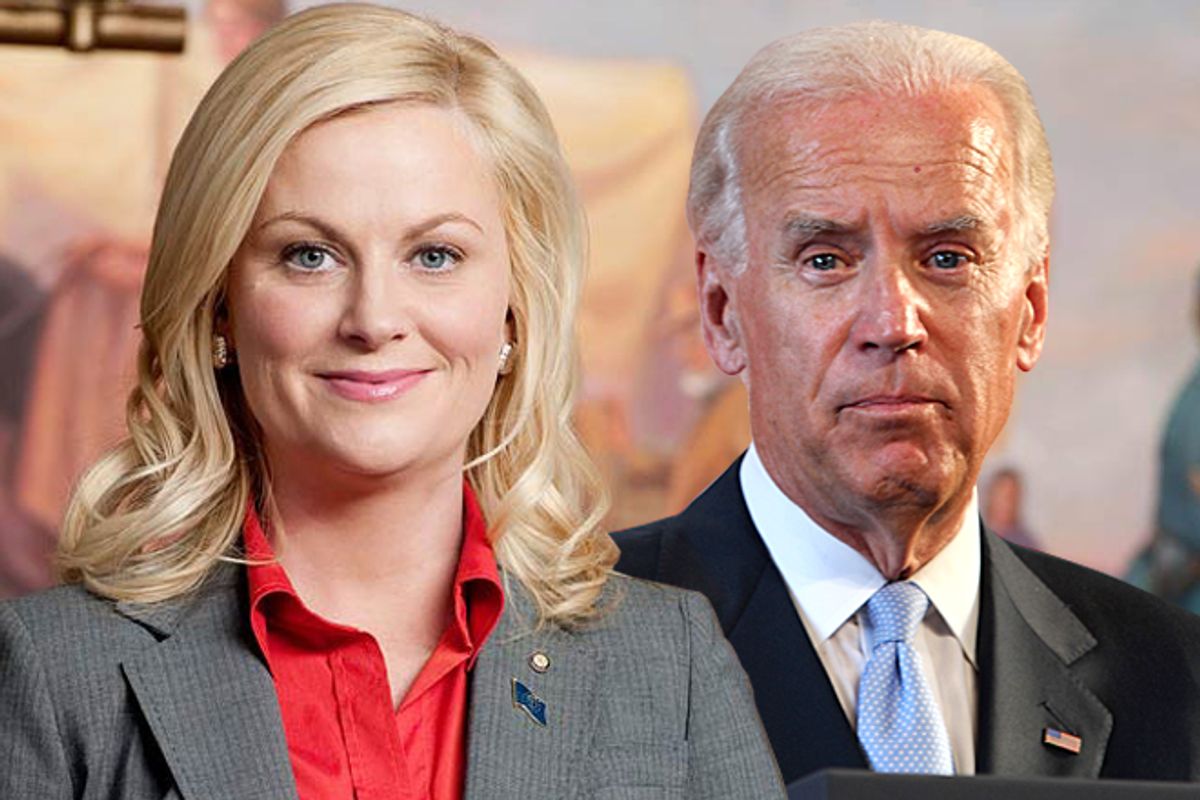 Oh, life, thank you thank you thank you. In what sounds like the greatest pairing since that first pretzel got dipped in a jar of Nutella, it's been announced that Vice President and cantankerous, malarkey-calling uncle to an entire nation Joe Biden is guest-starring on next week's episode of "Parks and Recreation." What is there to say today but, "Wheeeeeeeeee!"

It helps, of course, especially for those of us here in the godless left-wing media in the Gotham full of sodomites, that Biden makes his appearance as a man heading into his second term. For Amy Poehler's city councilwoman Leslie Knope to have a brush with a guy who'd just lost to Mr. Backwards Baseball Cap would have been a downer moment for the sitcom, a little hiss of air going out of the bit's tires. The scene, which was gently adjusted for two possible election outcomes, had to be kept top secret until after Nov. 6, lest "some provision might have to be made to give the Republican vice-presidential nominee, Representative Paul Ryan, a similar cameo."

Instead, in a scene shot last July, Knope comes face to face with the man who she declared, last year, "is on my celebrity sex list — well, he is my celebrity sex list." In NBC's tease of the scene, it's clear from the moment old Joe flashes his ridiculously pearly white smile at Knope why he's worthy of her adoration.

It takes a big man to be a great second banana. Few have the panache, the firmness of character, the talent or rare gift for conveying with utter conviction that they think the view from the sidelines is the absolute greatest. It's a world of spotlight-hogging leading men, but few Ed McMahons, George Costanzas and John Watsons. And then there's Biden. Biden, who can incense right-wingers with the drop of a single well-placed F-bomb. Biden, who spent much of his vice-presidential-debate time with Paul Ryan LOL-ing in his opponent's face.

He may well decide to go for the White House in 2016, although he'd be 73 then, a full four years older than Reagan was when he became America's oldest president. But Biden knows he's a man with only so many years of public service ahead of him. And what makes Biden so awesome right here and now is how thoroughly cool, how totally chillaxed, how not terribly different from the Onion's version of Joe Biden Joe Biden is about it all. Even as he was delivering fiery speeches in a year full of tense, often vicious campaigning, Biden somehow always managed to keep an air of "It's all good, man" around him.

And at no other moment this year was that bitchin' Joe Biden more evident than election night. After Barack Obama's heartfelt acceptance speech, Biden strutted out onto the stage like a boss, beaming broadly and making shooty fingers at Obama. Look at us! he seemed to say. We're the frickin' president and vice-president of the United States! Pew pew pew! As writer Stefan Stern has noted, Biden works it like the Fonz.

No wonder Leslie's smitten. That's a guy who knows how to have fun. And when he tires of politics, there's always a new career waiting for him. "Parks and Recreation" executive producer  Michael Schur told the Times this week, "The vice-president was amazing. He improvised a couple of things that we ended up using." Dude. Sweeeeet.