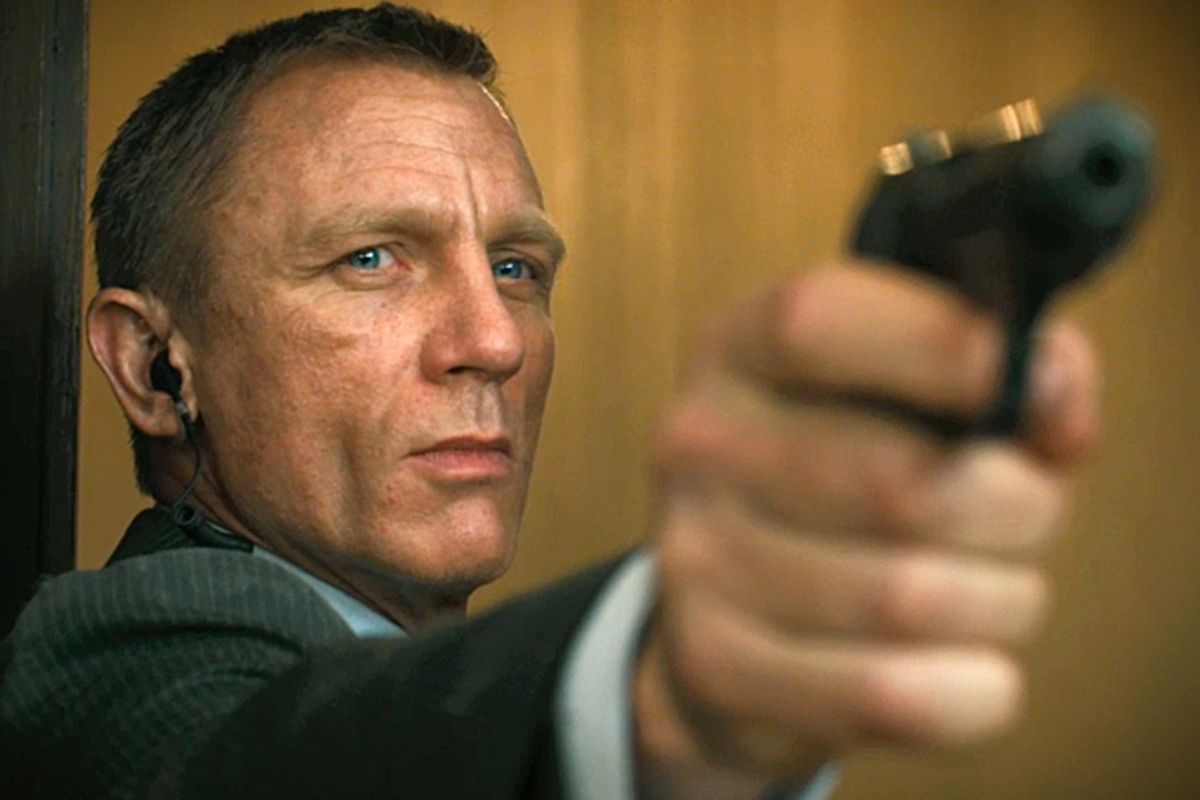 Reinventing the James Bond franchise to fit the sexual and cultural politics of the 21st century is a dicey proposition at best, and it’s safe to say we’ve seen mixed results so far. If Daniel Craig’s 2006 debut as Bond in “Casino Royale” was a smashing success, bringing a new physicality and cinematic verve to the series along with a touch of real-world anomie, the dour and violent “Quantum of Solace” arguably went too far in the latter direction. (I actually thought it was an interesting experiment, if not an entirely successful one, but fans who complained that it didn’t seem much like a Bond movie were correct.) That $225 million misstep nearly succeeded in killing off the series – which left the world of Ian Fleming’s novels behind long, long ago – but now Bond and Craig are back in “Skyfall,” a rich, impressive, overstuffed and rather chilly spectacle that already looks like the biggest hit in franchise history, even before its American release.

I suppose the obvious thing to say about the Bond series is that it’s a stylized and gendered fantasy universe with almost no connection to the real world. But it’s never been quite that simple. Of course Sean Connery’s iconic 007 of the 1960s was an idealized projection of maleness, an object of narcissistic lust for preadolescent males first of all, and only secondarily for women. He combined classic masculine characteristics of strength, virility and stoicism with more feminine standards like style, grooming and verbal wit; in many respects Connery-as-Bond was the grandfather of the metrosexual. There can be no doubt that he shaped the gender identity of an entire generation of boys; “Goldfinger,” “Dr. No” and “Diamonds Are Forever” (which, inexplicably, my friends and I decided was the best of them all) are closely linked in my memory with my first glimpses of my big brother’s Playboy collection, and the semiotics are about the same.

You can probably explain a lot about the contemporary “crisis of masculinity” by tracing the Bond character through the decadent self-parody of the Roger Moore era, the brief and underappreciated Timothy Dalton interregnum and the semi-renaissance under ironic, imperturbable Pierce Brosnan. Let’s leave that for someone else’s doctoral dissertation and fast-forward to Craig, who presents an earthier, more physical 007 than any of his predecessors. Yes, he’s an actor who possesses unusual and ambiguous sexual power (employed to entertaining effect in “Skyfall”), but I’m actually talking about something more or something different. With his blocky physique, short-cropped hair and tightly tailored clothing, Craig feels connected to the stone and soil of Britain in a way no previous Bond has. Sure, Craig’s 007 can swill frou-frou cocktails with exotic beauties in a high-end Macao casino, but he’s arguably more comfortable on a London rooftop or a Scottish moor.

In what’s sure to be among the most discussed gender-studies moments of 2012, James Bond finds himself imprisoned on a devastated Chinese island by a nefarious character called Silva, played by Javier Bardem as the first overtly gay villain in Bond history. Now, the character of Silva is likely to be controversial on his own. I think he's intended to offer a new twist on the long and unfortunate cinematic history of gay male psychopaths – he’s queeny and devious, but also plenty skilled in the male-coded arts of warfare – but I'm not sure that entirely lets Mendes and the writers off the hook. Anyway, whether out of genuine desire or a desire to undercut 007’s masculinity, Silva slides up close to his bound antagonist and caresses his thighs: “There’s a first time for everything – eh, Mr. Bond?” But Bond meets his captor’s gaze with his customary implacability and asks, “What makes you think it’s my first time?”

No, I’m not suggesting that director Sam Mendes or his writing team (John Logan, Neal Purvis and Robert Wade) intend to raise serious questions about James Bond’s sexual orientation or possible level of bi-curiosity. It’s a gag, but a gag with a purpose: The ultimate secret-agent man’s man is familiar with the concept of homosexuality, and doesn’t view it as a matter for snickering or an outright impossibility. Of such baby steps is a new society forged! More seriously, that moment captures the complicated dance the makers of “Skyfall” are trying to pull off: situating James Bond in a more modern and slightly more realistic (or “realistic”) context, while holding onto his fantasy allure and remaining loyal to the ritualistic and episodic storytelling style that’s integral to this series.

In “Skyfall” as in “Casino Royale,” Craig’s Bond is meant to seem more vulnerable, more prone to human failings, than the character has ever been before. We see him unshaven (with gray in his stubble!), seriously wounded and/or seriously drunk, out of shape and unable to pass a basic target-shooting test. There’s an obvious contradiction here, since 100 percent of the potential audience knows that Bond is in practical terms an immortal character, that he has as much chance of not surviving or not triumphing as Odysseus does of not reaching home at the end of the poem that’s named after him. Yet Odysseus is made to suffer en route to his destination and so is Bond, who faces a number of major losses in between the show-stopping action scenes (which are some of the best in series history).

As hardcore fans already know, Bond’s past is linked to the landowning gentry of Scotland, and his family’s brooding ancestral manse actually becomes the climactic setting for “Skyfall” (featuring a nice cameo from Albert Finney as the crusty gamekeeper). Whether Mendes is really trying to add grit and dimension to Bond’s story or just cramming in another cinematic reference – in this case, to Alfred Hitchcock’s espionage classic “The 39 Steps,” which is also about a Scottish manhunt – is debatable. “Skyfall” is moody, thrilling and for the most part beautifully made, but like so much of contemporary action cinema it’s less like a story than a series of disconnected episodes, drawn from a whole range of plots and genres but employing the same characters.

Mind you, a lot of those episodes are pretty doggone terrific, and from the first seconds Mendes (best known for serious indie drama like “American Beauty” and “Revolutionary Road”) makes clear that he’s sticking closely to Bond formula and not arting up the thing too much. We begin with a dynamite opening chase sequence on the streets and rooftops of Istanbul, and then atop a train into the Turkish countryside, concluding with a surprise twist out of a classic Sherlock Holmes adventure (I won’t say which one). While the plot is the usual MacGuffin-ish search for something or someone – in this case, a hard drive that will reveal the identities of numerous British and American agents – the globetrotting quest packs in more film-school references to other movies than I could count, including several other Bond pictures, “Raiders of the Lost Ark,” “Silence of the Lambs” and “Tinker Tailor Soldier Spy.” (The technical work here is outstanding, especially Roger Deakins' cinematography.)

There’s a tremendous fight sequence set inside a Shanghai skyscraper, shot entirely in silhouette against a backdrop of “Blade Runner”-scale digital billboards, and another one in the aforementioned ultra-louche Macao casino, involving a pair of giant carnivorous lizards. But “Skyfall” is also among the most conspicuously British of the Bond films, a blend of Empire nostalgia and generational anxiety that features a devastating terrorist attack on the MI6 headquarters in London and the prospect that Judi Dench’s M will be forced out by an officious Tory politician (Ralph Fiennes). As a brand-new wonder boy Q (Ben Whishaw) tells 007, the gadgetry of the past has been set aside in favor of ruthless efficiency. Which does not mean – spoiler alert! – that you won’t see that classic Aston Martin at some point.

Honestly, the convoluted plot surrounding Bardem’s dyed and spackled villain and the vague mood of “Homeland”-style paranoia feel as incidental as Bond’s come-and-go heterosexual liaisons. (Naomie Harris and French actress Bérénice Marlohe offer the non-Craig eye candy.) “Skyfall” is a push-pull between the past and the present, an effort to drag a symbol of maleness as iconic as the Union Jack bulldog on M’s desk into a world of approximate gender equality and approximate acceptance of sexual difference. I’m not sure how sustainable that is over the long term; this is a smashing entertainment, but also one that feels over-engineered and constrained by its origins. But if James Bond’s definitely not going to get it on with a supervillain – especially not one with such execrable taste in shirts – he doesn’t feel embarrassed about that thing that happened at Oxford that time.