For crying out loud, we love you, Obama!

A tearful clip of the president goes viral — and briefly thaws our cold, cynical hearts 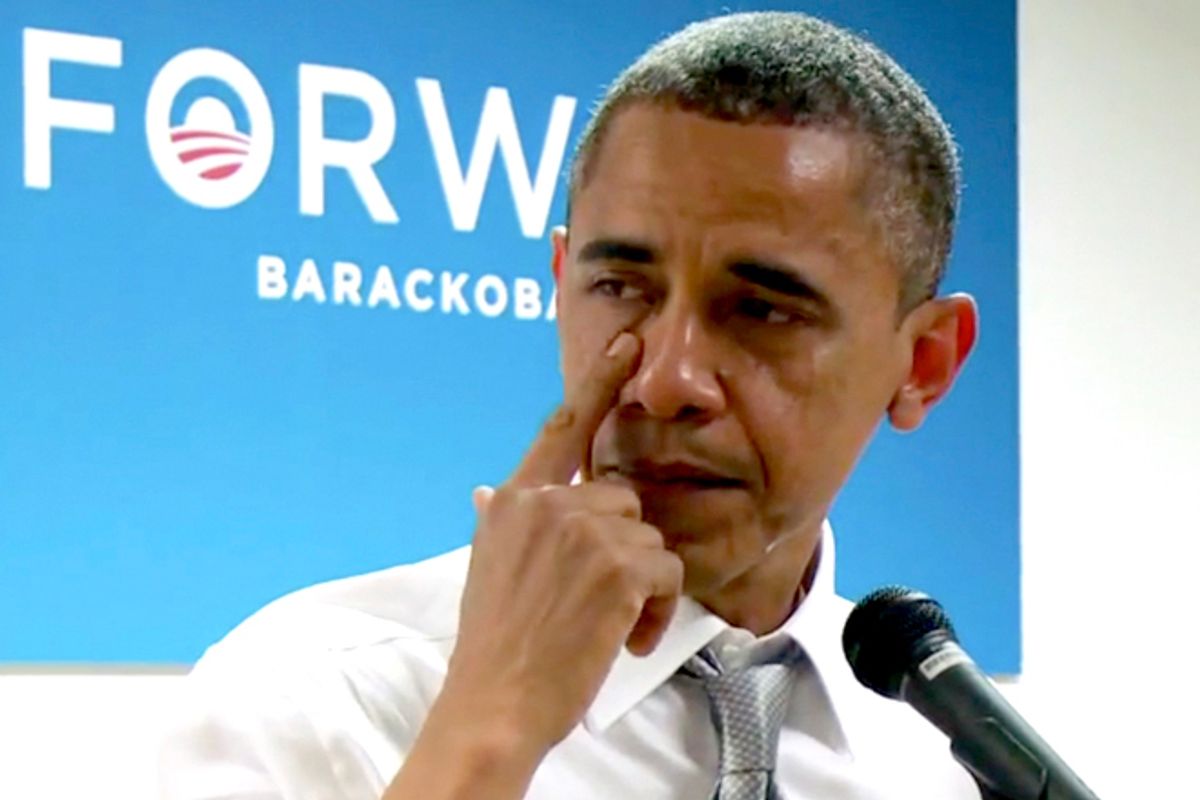 Jeez, isn't it enough you won a reelection; you had to go viral on us too, Barack? On Thursday, after defeating Mitt Romney and making white people all across this no-longer-"traditional" great nation of ours go all sad face and hilariously Twitter-rampaging, Barack Obama and his team decided to put a little icing on the victory cake. They released a video of an emotional president thanking his campaign team — and becoming visibly tearful near the end. Cue widespread epidemic of blurry monitors.

Yes, it was a prepared speech. And yes, the same morons who found it distasteful earlier this week when the president got choked up are even unhappier now that this – and I'm quoting a Chicago Tribune commenter here – "frickin' crybaby" is staying put in the White House. But plenty of others – like apparently every human being on my Twitter feed right now – saw that video as an affirmation of exactly whom we were voting for on Tuesday. It's a video of a leader with a heart.

In his speech, Obama recalled his early days as a community organizer in Chicago, how he "became a man during that process," and how he felt his work "had come full circle." And although his message was similar to the one he told the nation Tuesday night, when he said, "It doesn’t matter whether you’re black or white or Hispanic or Asian or Native American or young or old or rich or poor, able, disabled, gay or straight, you can make it here in America if you're willing to try," the tone was exponentially more subdued, more humbled and awestruck.

"I'm absolutely confident that all of you are going to do just amazing things in your lives," he said. "What Bobby Kennedy called the ripples of hope that come out when you throw a stone in a lake — that's going to be you."

What makes the clip so striking is how stunningly unique it is. In eight years, George W. Bush never had a moment of such unabashed emotion. Even Bill Clinton, for all his folksy appeal and charisma, could never quite shake off the whiff of performance in his attempts at sincere connection. And just try for a hot second to imagine President Mitt Romney making a similar speech to his campaign workers after winning the election. It's not that Bush or Clinton or Romney could never have been the guys to pull off such a dewy-eyed delivery that makes Obama's so endearing to his supporters. It's that it's an almost unprecedented display of vulnerability, one that suits both the president and the mood of the nation he leads right now.

On Piers Morgan's show Thursday, Massachusetts Gov. Deval Patrick observed: "To see a president of the United States being that raw, that emotional with his campaign volunteers and to see Barack Obama openly weeping at one stage, very unusual, very moving." And former CBS anchor Dan Rather told CNN of the clip, "I'm not sure there has ever been any American president, perhaps no world leader that I know of in my lifetime, who has come out with that raw emotion in a very attractive way." Or, as a friend put it simply, "I am so happy that our president is such a mensch!"

We have been living of late in cynical times. That cynicism and that mistrust and that culture of snark weren't wiped out on election night, and they weren't blown away in a hurricane. But after so much that's happened in just the past few days, and with so many unfathomable struggles yet to come, a whole lot of us need to believe we're in the hands of a guy who can feel something. Who can speak, right now, about what he's learned of "the hopes and aspirations and grit and resilience" of people. And who can tell us all, with tears in his eyes, "I'm really proud of you."