"Scandal": A cynical, progressive oddball soap opera with a lot of chutzpah

Shonda Rhimes's D.C. soap opera is the most audacious, insensible series on TV. And I can't stop applauding 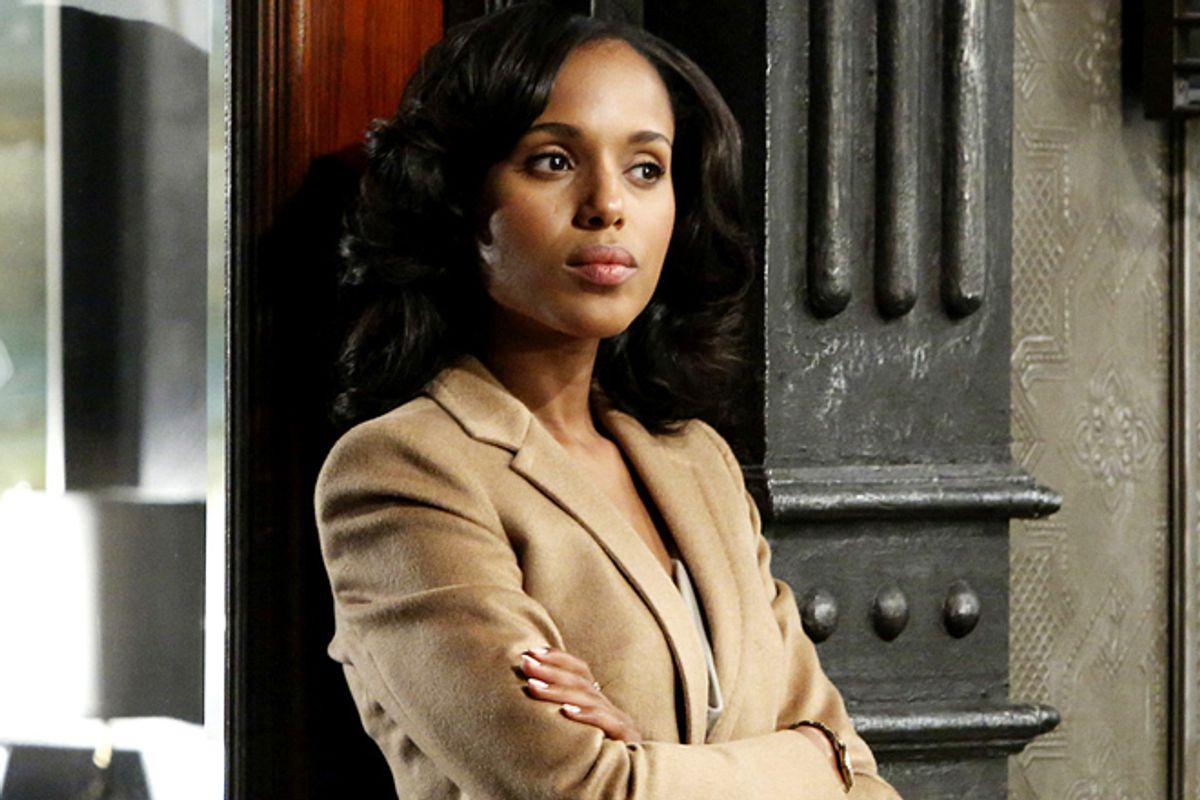 “Scandal,” ABC’s procedural-tinged soap opera about an all-powerful D.C. political fixer created by "Grey's Anatomy's" Shonda Rhimes, opened with a very bold bit of melodrama. The series’ heroine, Olivia Pope (Kerry Washington, gorgeous and wooden), was having a passionate, tortured, secret, true love affair with a married man — but not just any married man. Olivia’s mister was none other than the president of the United States, the adoring, pro-choice Republican (“Scandal” traffics in all sorts of fantasies) Fitzgerald Grant (Tony Goldwyn).

Five episodes into the series’ second season, audacity has been revealed to be the show’s standard mode. “Scandal,” imperfect and insensible as it often is, may be the ballsiest television show I’ve ever seen. It takes all of the tropes of the soap opera — the affairs, the secrets, the implausible plot turns that are so often dismissed as being trivial and not coincidentally female — and deposits them squarely, unabashedly, at times ludicrously on a world historical stage, a move familiar to Tolstoy and Cecil B. DeMille but not much television. Even as I groan, I can’t stop my applause.

In just 13 episodes, “Scandal” has displayed a passion for the insane plot arc. Last season— and take a big breath before you dive into these particular story mechanics — a junior staffer who had sex with the president became one of Olivia’s clients, only to be seemingly murdered by the vice-presidential aide who had impregnated her. Turns out she was really murdered by the president’s very own chief of staff, a gruff, happily married gay man named Cyrus, who totally got away with it.

This season has seen the unspooling of an even grander conspiracy, one that could be straight out of “The Parallax View,” if the conspirators were the heroes. In last night’s episode, it was revealed that Olivia; Cyrus; the first lady, Mellie; a female Supreme Court Justice; and smarmy, Southern oil baron Hollis Doyle likely collaborated to steal votes for President Grant. Attempting to cover the putsch’s tracks, Doyle bombed the Internet-security company that provided them with voter-defrauding software, killing six people and then making it look like the work of a vengeful girlfriend (who is now employed by Olivia).

This plot takes chutzpah, and not just because it pushes a pitch-dark vision of electoral politics. “Scandal’s” cynicism is married to an oddball sort of progressivism. Corruption and murder are endemic, but three women and a gay guy can overthrow the government — and if not for one impatient macho man, do so nonviolently.

“Scandal” doesn’t have a firm grasp of its own tone — it’s too enamored of its characters to take their bad behavior seriously. We’re supposed to like many of these lousy people, and not in the like-them-at-your-own-risk manner of the best antihero dramas. Cyrus really had an innocent 20-something murdered — but he’s also got a funny story line going with his husband, who really wants them to adopt a baby, and often provides comfort and chatter to a lonely Olivia. The president really is endangering his entire presidency because he has such a hard-on for Olivia, but that’s supposed to be swooningly romantic. Olivia really is, at the very least, doing her damnedest to cover up a bombing that killed six people, and at most trying to obscure a coup d’etat that she knowingly participated in. She’s the show’s unequivocal heroine, a badass who is rarely wrong and always stunning.

There’s one character in which the balance seems exactly right: Mellie, the president’s scorned wife. Mellie is a “terrifying political animal” hurt by her husband’s love affair with Olivia. She often lets that hurt slip into anger, but sometimes feeds it into clever and productive political plays. She’s ambitious and manipulative, furious that she subsumed her own ambitions for her husband’s, but when she tells her husband to stop moping about his girlfriend, she couldn’t be more right. As the weak leg of the show’s founding love triangle — Fitz and Olivia are a true love kind of thing, Mellie’s just scratching to hold on to him — she’s often portrayed as the heavy, but even this can’t obscure her streak of awesome. The show sees her more clearly, both in her weaknesses and strength, than its own heroine.