Labor chief Richard Trumka: "We won't be taken for granted"

The AFL-CIO president talks Obama's win, the struggles ahead, and the movement's evolving political role 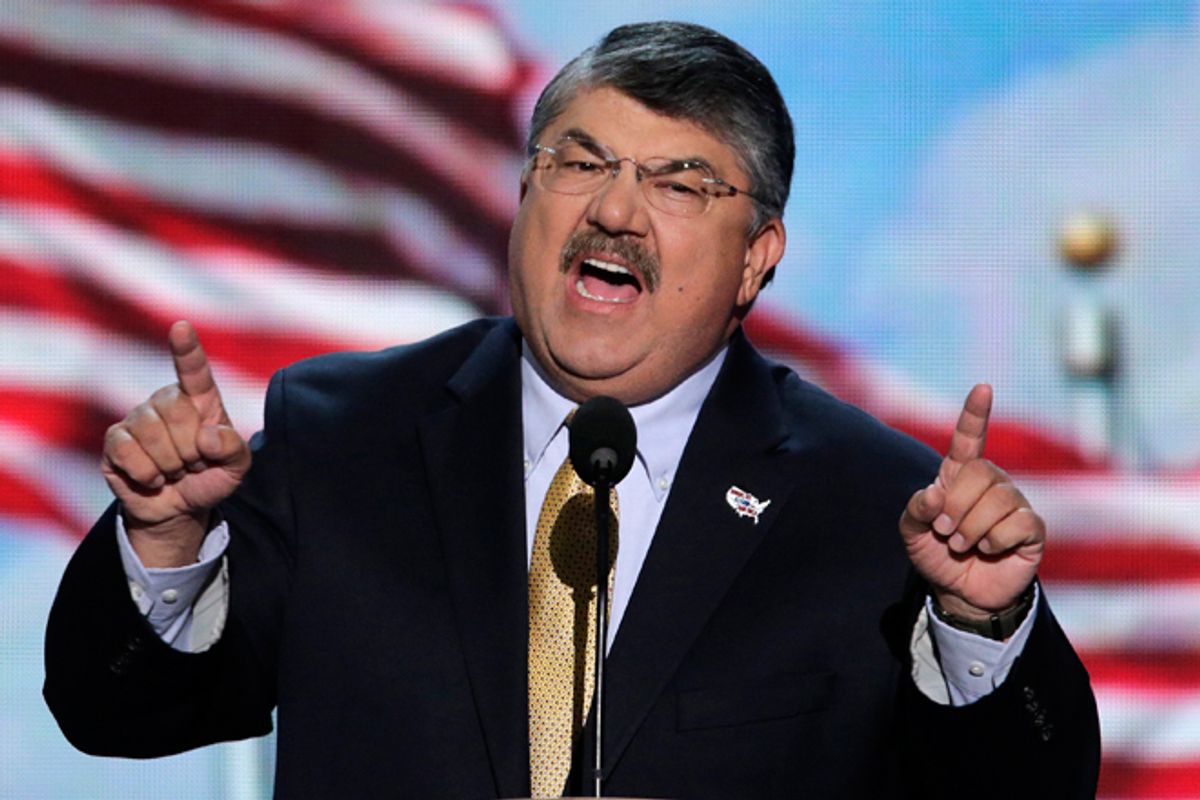 Unions had a good night last Tuesday. “I think we were the margin in states like Ohio, Wisconsin and Nevada, and probably three or four other ones,” AFL-CIO president Richard Trumka told Salon in a Wednesday interview. In Ohio, said Trumka, AFL-CIO members are 83 percent white. 40 percent are evangelicals, and 53 percent own guns. “And they voted 70 percent for Barack Obama.”

Building on last year’s successful referendum campaign to overturn collective bargaining attacks in Ohio, the AFL-CIO racked up 80,000 volunteer shifts and 2 million voter contacts in the state. An all-out labor effort also helped deliver victory for labor stalwarts like Elizabeth Warren and Tammy Baldwin. While unions’ effort to write collective bargaining rights into Michigan’s constitution fell flat, they beat back well-funded anti-union measures in Michigan and California that their enemies would love to take national.

So what happens now? As Salon has reported, the AFL-CIO announced earlier this year that it was rebooting its approach to politics. Trumka says Tuesday’s results vindicate the first step: investing more cash in an independent infrastructure focused on door-to-door political organizing for pro-labor politicians, rather than in Democratic Party campaigns and committees. Now comes the hard part: making good on labor’s promise to hold those politicians accountable. “One thing that we’re doing different than we’ve ever done before,” said Trumka, “is we’re not dismantling our program today.” Instead, he promised, it will move “from electoral politics to advocacy, and from advocacy to accountability.”

As Tuesday’s results rolled in, labor leaders were quick to claim a mandate for progressive governance, including greater stimulus, taxes on the rich rather than “entitlement” cuts, and immigration reform. On the latter, said Trumka, Republicans “either get on board or they are on the path to oblivion.”

“A pretty clear message came out of that election yesterday,” said Trumka: Voters “rejected Romney-Ryan economics,” showed “that we should start making the wealthy start pay their fair share,” and “rejected the notion that we should bring down the deficit at all costs.” In exit polling released by the AFL-CIO Wednesday, “reduce spending on Medicare and Social Security to bring down the budget deficit” drew support from just 18 percent of voters nationwide.

Trumka touted two sources of labor leverage: Mobilizing workers to support or oppose potential deals, and turning out at election time to reward or punish. He said that includes primaries. (In 2010, the AFL-CIO forced Arkansas then-Sen. Blanche Lincoln into a runoff with a primary challenge from the left, but joined the White House in backing Pennsylvania’s Arlen Specter against a more progressive primary challenger.) Trumka said the AFL-CIO isn’t wasting any time: Last Thursday it held 100-plus local events to push members of Congress not to back a regressive “Grand Bargain.”

“If any bipartisan deal includes cuts to Social Security, Medicare or Medicaid, or extends the Bush tax cuts for the top 2 percent," Trumka pledged, “we will oppose it.” Asked about “chained CPI” – a way to slow Social Security’s growth that Sen. Bernie Sanders has warned could be part of a bipartisan deal – Trumka said, “That is definitely a cut to Social Security benefits.” Asked if he’s confident Obama would hold the line against cutting social insurance or extending all of the Bush tax cuts, Trumka answered, “I think so. He’s been pretty clear about that.” (In a September MSNBC appearance, top Obama adviser David Axelrod mentioned both “raise the cap” and “adjust the growth of the program” as elements of a Social Security “discussion worth having.”)

Trumka said he was concerned when Obama asserted in the first presidential debate that his position on Social Security was “somewhat similar” to Romney’s. Afterward, said Trumka, “his whole team scrambled to say he misspoke, and hopefully he misspoke. Because Romney wanted to privatize Social Security and voucherize Medicare and Medicaid. I don’t think that's the president’s position. And I can tell you something: If it were, we’d oppose it just as strenuously as if Mitt Romney proposed it.”

As for President Obama’s endorsement of a 5-to-2 ratio of cuts to revenues in a deficit deal, Trumka said, “I think he threw that out to say, ‘Look I’m willing to do something.’ We think we need more revenue in there.”

Among labor’s disappointments during Obama’s first term was the lack of serious presidential or congressional effort to pass the Employee Free Choice Act, a bill designed to made it easier for workers to win union recognition and harder for companies to stonewall negotiations. Republicans and business groups launched a full-throttle air war against the bill’s “card check” provision, which would require employers to recognize a union if workers presented signatures from a majority of their co-workers. But when Democrats controlled the House and Senate, the president avoided even mentioning the bill, except in front of union crowds. Nevertheless, Mitt Romney warned on the campaign trail that if Obama was reelected, EFCA would rise again. Was he right?

“We’re going to work to make sure that those broken labor laws get fixed,” said Trumka, “because when workers have a voice on a job, it improves their lives, and it improves the economy as a whole.” Does that mean EFCA? “I’m not going to say the Employee Free Choice Act,” said Trumka. “But something that is comprehensive, that fixes the nation’s broken labor laws.” Asked about his minimum expectations for such a bill, Trumka said it would need to shorten the amount of time it takes for workers to secure an election, combat management stalling tactics, and crack down on illegal firings of pro-union workers. “Right now,” said Trumka, “they fire a worker for union activity, and it costs them nothing.”

Asked whether it would be necessary for such a bill to include “card check,” Trumka demurred. “Having the election process shortened is a necessary component.” As for another EFCA provision, mandating arbitration when labor and management can’t reach agreement on a first union contract, Trumka said, “that’s about as smart a thing as we could do.”

Interviewed before the election, AFSCME president Lee Saunders, who leads the AFL-CIO’s largest union and chairs its political committee, struck a similar tone: “I don’t know if we can go back to the Employee Free Choice Act. I mean, we weren’t successful a while ago. But we do believe that there are ways that we can level the playing field.”

Will labor law reform happen in the coming Congress? “Hopefully,” said Trumka. Will Obama take a more active role? “I think the president understands the importance of collective bargaining, and that it’s a part of the solution to rebuilding the middle class.”

Meanwhile, there’s plenty the Obama administration could do – and so far hasn’t – without Congress. With an executive order, the president could change federal contracting to exclude more union-busting companies. With regulations, his Labor Department could restrict the use of dangerous equipment by teenagers working on factory farms, or extend basic overtime protections to domestic workers.

Trumka called for swift action on a long-delayed OSHA regulation regarding silica dust. Asked how quickly it should move, Trumka answered, “Last year.” As for the Trans-Pacific Partnership trade talks currently underway, Trumka said, “They have to make sure they negotiate a deal that actually helps in-sourcing rather than promotes outsourcing. That’s a position that he stood for throughout this election, and I feel confident that he will follow through on that.”

As for critics who question whether the AFL-CIO will really demonstrate independence from the White House, Trumka said, “See what we do. See if we aren’t independent. Whenever something’s good for workers, we’ll support it ... If it’s bad for workers, it doesn’t matter to us who proposes it. We won’t be on board. We won’t be taken for granted.”