John McCain and his sidekick, Lindsey Graham, are determined to get to the bottom of an entirely made-up scandal 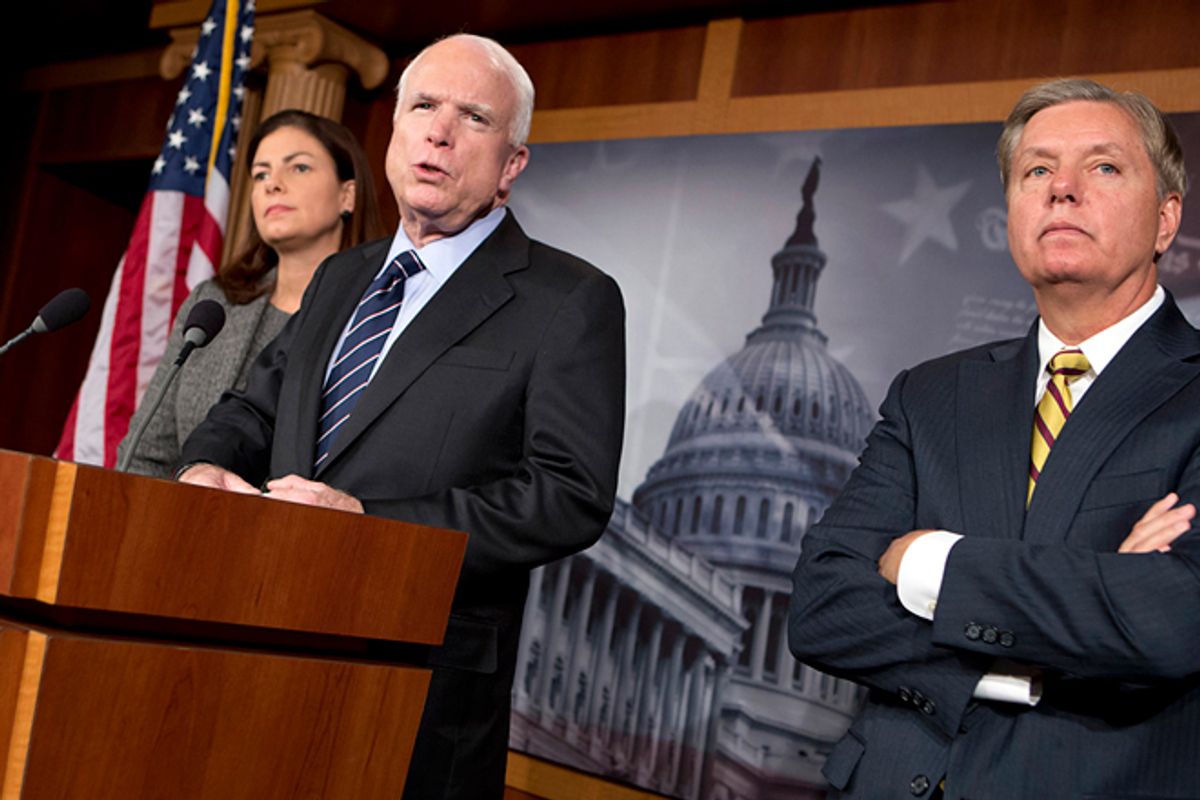 Cranky, petulant John McCain is so, so mad about Benghazi these days. He is just furious at the Obama administration for ... something. (For being the Obama administration, instead of the McCain administration.) And he cannot stop going on TV and complaining about how Ambassador to the U.N. Susan Rice blamed a "flash mob" for the attack on the American consulate, when in fact it was a terror attack, by terrorists. He is so busy going on TV and saying that, and demanding "Watergate hearings" into the thing Rice said, that he didn't have time to read any news articles that explain that he is just wrong about what Rice said.

It looks like maybe McCain just didn't want to go to the hearing where he would have learned more stuff about what happened in Benghazi because it wasn't going to happen on TV, and no one would have been able to watch John McCain yell at someone for a while, about how terrible they are. CNN asked him why he skipped the briefing, and he just swore at them for a while.

"I have no comment about my schedule and I'm not going to comment on how I spend my time to the media," McCain said.

Asked why he wouldn't comment, McCain grew agitated: "Because I have the right as a senator to have no comment and who the hell are you to tell me I can or not?”

When CNN noted that McCain had missed a key meeting on a subject the senator has been intensely upset about, McCain said, "I'm upset that you keep badgering me."

Here's what happened: Susan Rice went on TV a few days after the attack in Libya and said a bunch of cautious stuff -- based on talking points provided by the CIA -- about how it looked like some well-armed extremists took advantage of protests to stage an attack on our consulate. The CIA later determined that there hadn't been protests outside the consulate, but everything Rice said represented the administration's then-current understanding of what had happened. John McCain is calling Rice stupid and accusing her of lying over and over again based on a weird, mendacious misinterpretation of what she said on TV. (Would John McCain care about this if the comments he is so mad about hadn't happened on a Sunday show? THAT IS JOHN'S SAFE SPACE, AMBASSADOR RICE.)

McCain is being aided in his quest by a political press that still takes him seriously as a Senate elder statesman, even though he is actually a bitter, inconsistent hawk.

Meanwhile, John McCain's best friend for life, wee Sen. Lindsey Graham, is joining in, playing, as ever, the Torgo to McCain's Master. He is joining in the filibuster threats and making sure that everyone knows that he blames Barack Obama for the attack in Benghazi.

No one pays attention to Lindsey Graham, besides the producers of Sunday shows and probably the Washington Post editorial board. He is basically hated by all Republicans and Democrats for different but equally valid reasons. At the moment he is pretending he has any role at all in budget deal negotiations, and also promising to pass an immigration reform bill. That is a rich claim not just because no Republicans respect or listen to him, but also because if there is an immigration bill, he will almost certainly withdraw his support from it at some point, because he will find some procedural move by Democrats to be a massive and unprecedented betrayal of Senate comity.

The other important thing about Lindsey Graham is that he lied for years about being a war veteran and no one ever asks him about it or brings it up really.

McCain and Graham are going to do their best to filibuster Rice if she is nominated for secretary of state, just as they did to Condoleezza Rice, who as we all remember a) was the national security adviser who failed to stop 9/11 and b) lied repeatedly and audaciously about Iraq on Sunday shows. Just kidding, Graham and McCain voted for that Rice.

Petulant loser John McCain and his reviled sidekick Lindsey Graham are considered two of the United States Senate's wisest foreign policy experts, because both of them love war. Graham will be on "Meet the Press" this Sunday, McCain will probably be on one of the other ones.