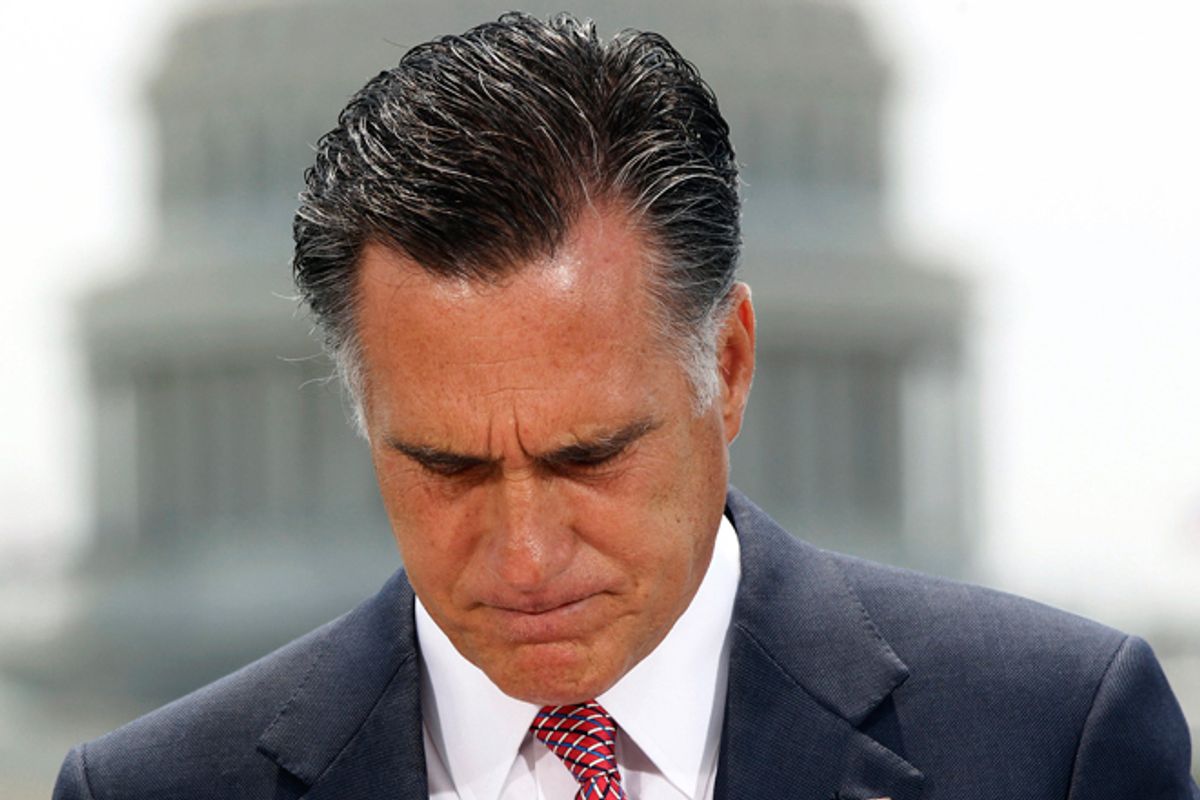 Sometimes electoral defeats radicalize political parties. This was the case with the Republican Party after the 2008 election, when the right convinced itself that Barack Obama had been elected only because George W. Bush had violated conservative principles, given the ideology a bad name, and left voters susceptible to the deceptive charms of the Democratic nominee and his Trojan horse agenda. The solution: Enforce a strict code of ideological purity within the party and fight the new president’s radical policies relentlessly.

This reading of the ’08 results was reinforced by the first few years of Obama’s presidency, when his approval rating fell to under 50 percent and Republicans won a massive midterm victory.  That Obama was the second coming of Jimmy Carter became an article of faith on the right, and a GOP White House restoration in 2012 was taken as a given. Which is why their resounding defeat last week has been so traumatic for Republicans. And this loss seems to be having a different effect on the party: This time, it’s shifting the party away from the purity obsession and absolutist rejectionism that defined its conduct in Obama’s first term.

This is evident in the reaction of prominent Republicans to Mitt Romney’s post-election comments blaming his defeat on “gifts” that Obama supposedly showered on women, blacks, Latinos and young people. New Mexico Gov. Susana Martinez, who was a featured speaker at the Republican convention in Tampa, called it a “ridiculous statement” on Thursday. "That unfortunately is what sets us back as a party – our comments that are not thought through carefully,” she said.

This came as Louisiana Gov. Bobby Jindal, a Republican with obvious national ambition, continued to lash out at Romney’s comment, calling it “absolutely wrong” and saying that “I absolutely reject that notion, that description.” In an interview with CNN on Thursday, Jindal added, “If you want voters to like you, the first thing you need to do is like them yourself.” Kelly Ayotte, who was one of Romney’s top surrogates and was included on his V.P. short list, also joined the pile-on.

Granted, that Republicans would criticize a candidate who just lost a national election isn’t by itself surprising. And there’s never been an abundance of affection for Romney himself within the GOP; conservatives were suspicious of his ideological credentials from the moment he came to the national stage.

But the spirit behind Romney’s comments this week – as well as those he made in the “47 percent” video that emerged back in September – is consistent with what until now has been Republican orthodoxy in the Obama era. A major point of emphasis on the right has been the statistic that 47 percent of Americans don’t pay the federal income tax, which has fed the broader “makers vs. takers” narrative that top Republicans – including Romney’s running mate, Paul Ryan – have championed these past few years.

Because of the purity mind-set that took hold when Obama was first elected, Republican leaders mostly abided by these themes over the past four years; to publicly object would have been to invite the “RINO” label and a primary challenge. But the shock of Romney’s defeat has opened up at least some room for introspection. The question is whether the outcry from Jindal and others will be matched by a meaningful shift in policy. Will Republicans now follow the advice of conservative writer Ramesh Ponnuru and speak more directly to the economic interests of the middle class?

This, obviously, is a much longer-term question, and the answer won’t be clear for some time; if there is a real change, it will take shape over years, not in the days immediately following an election. But there may at least be some room for a discussion within the party now. After all, Bill Kristol is now publicly urging Republicans to accept a deal with Obama to raise tax rates on income over $250,000. We don’t know if any Republicans in Congress will actually go along with this, but Kristol’s comments were taboo during Obama’s first term – and for the 15 years before it, too.

This is not to suggest that the GOP has suddenly transformed itself, or that it’s on course to do so. A consensus in the party to dismiss the ’12 result as a product of Romney’s incompetence and not a broader indictment of the party’s dwindling demographic appeal may yet take hold. But in the run-up to the election, I suggested that a Romney defeat would be good for the system because it wouldn’t normalize the GOP’s conduct during Obama’s first term. The loud rebukes of Romney’s “gifts” comments are one of several post-election signs that the GOP may play a more constructive role in the next four years than it did in the last. There are now calls for comprehensive immigration reform where there weren’t before, and Kristol isn’t the only influential Republican changing his tune a bit on taxes.

In Britain, parties out of power have only one edict: to oppose the party in power. But our system depends on the opposition party contributing to the governance of the country, and not just devoting itself to defeating the other side. It’s a low bar, but there are hopeful signs that last week’s result is pushing Republicans in a healthier direction.