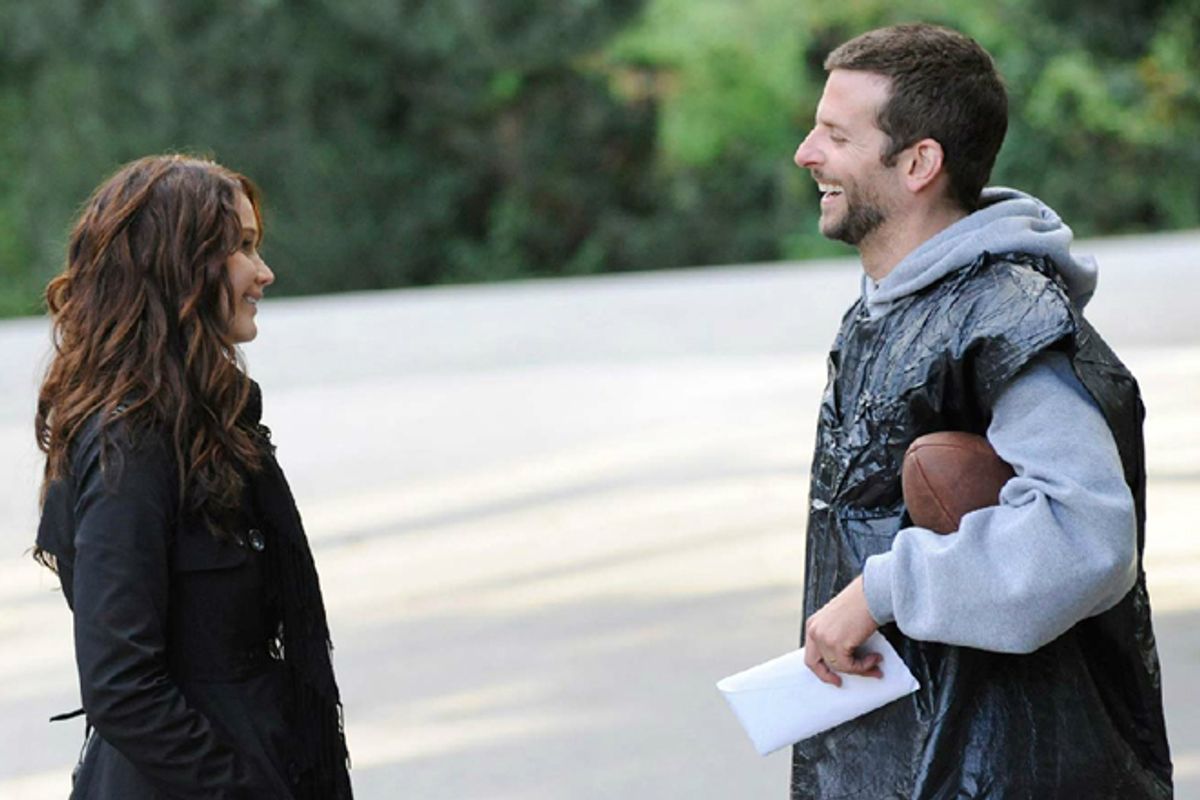 We get thrown right into the middle of Pat Solitano Jr.’s troubled life story, without any of the usual context or background. Played by Bradley Cooper in a major departure from his customary sleek pretty-boy roles, Pat is the unhinged, overly intense and not always likable protagonist of David O. Russell’s manic, inventive and rewarding “Silver Linings Playbook.” When we first meet him, he’s standing in the corner of his spartan room in a Baltimore mental hospital, talking to himself. His mom, played by the terrific Australian actress Jacki Weaver, has shown up from Philadelphia to sign him out, against doctor’s orders and without having consulted her husband. What did Pat do that got him locked up in the first place? What’s going on with this family? Why do Pat’s wife and the school where he used to teach have restraining orders against him?

Answers to those questions won’t come into focus for a while, although you may rapidly reach the conclusion that the doctors were right and Pat would be better off heavily medicated and under psychiatric care. Back in the family’s Philly neighborhood, with its slightly desperate upper-fringe-of-the-working-class feeling, Pat Sr. (Robert De Niro) has no idea his younger son is returning home. One of the best and inarguably funniest roles of De Niro’s recent oddball supporting career, Pat Sr. fronts as an Italian-American tough guy but is more like a barely glued together mass of neuroses, a failing bookie with a penchant for disastrous side bets and an intense OCD relationship with the Philadelphia Eagles. (His wardrobe gets better and better as the movie progresses; I can’t stand football, but I want Pat Sr.’s Eagles-green cardigan.)

As for Pat Jr., whose apparel frequently involves a shapeless gray track suit topped with a black garbage bag – so he can sweat off weight as he runs – his first item of business is studying up on the high-school English syllabus his estranged wife, Nikki, is teaching, in hopes of impressing her at some unspecified future date. (Nikki plays an important role in Pat’s story, but almost entirely through her absence.) This leads, however, to Pat flinging a copy of “A Farewell to Arms” through a closed window at 4 o’clock in the morning, and awakening his parents with a maniacal rant against Ernest Hemingway. (He refuses to apologize, blaming Hemingway. Pat Sr. says, rather mildly, “Tell Ernest Hemingway to come down here and apologize to us in person.”) I can’t help detecting a genre commentary of sorts here, whether it originates with Russell (who also wrote the script) or Matthew Quick, author of the original novel: Hemingway was writing one kind of story, which purports to depict the tragedies of the real world in the 20th century and does not demand a happy ending. This is the other kind of story.

In fact, “Silver Linings Playbook” is a romantic comedy, even if it doesn’t feel like one at first. Furthermore, it’s a rom-com that succeeds in revitalizing that discredited genre where so many others have failed, injecting it with the grit and emotion of realist drama rather than with amped-up whimsy or social satire or montages of people walking on the beach while whiny emo-pop plays on the soundtrack. As he did with the boxing movie in “The Fighter,” Russell proves that you can breathe new life into one of the hoariest forms in the Hollywood lexicon. He takes a movie where everyone in the audience knows how it will end and makes us suspend our disbelief and fall in love all over again. (After an entire decade in the indie-film wilderness following his 1999 breakthrough with "Three Kings," Russell seems to have found himself a niche reinventing classic movie genres.)

It helps, of course, that we’ve got a dynamite couple to fall in love with. Russell has long had a flair for unexpected casting combinations, but I really didn’t expect Cooper and Jennifer Lawrence to be such a combustible duo. (Yes, in real life, there’s a significant age spread between these two: Cooper is 37 and Lawrence 22. At the risk of sounding like a total sexist pig, it doesn’t play that way on-screen.) Finally getting unleashed from his immensely lucrative “Hangover” roles and a series of tepid leading-man movies, Cooper gives a twitchy, physical, marvelously alive performance as Pat Jr., who’s barely aware how poor his impulse control is and doesn’t seem to notice that his face is often marred with mysterious scars and bruises. As for Lawrence, she’s been in so many movies lately that she’s in danger of being overexposed but I only wish her chaste and cautious performance as Katniss Everdeen had one-third of the fire she shows here as Tiffany, a grieving widow going through a spectacular meltdown of her own.

There have been dozens if not hundreds of other movies about two damaged people who find each other, and quite a few that try to wring bittersweet laughs out of the painful struggle with mental illness. But it’s always wonderfully satisfying to see a conventional or archetypal story structure handled with this level of craft and enthusiasm. “Silver Linings Playbook” never feels like a movie you’ve seen before, even if Pat and Tiffany’s ultimate destination is clear the moment they meet. It seems clear to us, of course, but not to them; Tiffany assumes he’ll just be another entry on her long list of recent sexual partners, while Pat clings like a drowning man to the idea that his marriage to the invisible Nikki – which ended in an act of disturbing violence, as we eventually learn – can still be redeemed.

During Tiffany and Pat’s disastrous first date (which Pat insists isn’t a date, because he’s getting back together with Nikki any day now) they eat Raisin Bran at a diner while she regales him with steamy tales about sleeping with all her co-workers (male and female) at her last job. Pat isn’t literally wearing his garbage bag in that scene, but he might as well be. All the crockery ends up on the floor, along with the remnants of Raisin Bran, and we’re left with the realization that these two people are falling in love but may be too screwed-up to deal with it – a phenomenon that afflicts many of us at one time or another, from you and me to David Petraeus and that lady with the upper arms.

There’s no point denying that “Silver Linings Playbook” is shameless cornpone, given that the bumpy course of Pat and Tiffany’s romance includes such elements as a ballroom dancing competition, a crucial showdown between the Eagles and the Dallas Cowboys and a parlay bet orchestrated by Pat Sr. that links the two. Not to mention a deceptive epistolary exchange straight out of classic French theater. But where most American romantic comedies are either made by talentless hacks or by Hollywood pros who can barely conceal their contempt for the material and the audience, this one was made by a leading American director at the height of his powers who’s paying attention to every emotional beat, every cut and every frame. Great cinema? Hell, I don’t know. But one of the most satisfying movies of the holiday season, that much is for sure.