A restaurant critic's scathing review goes viral, leaving behind a bad taste that matches the food he pans 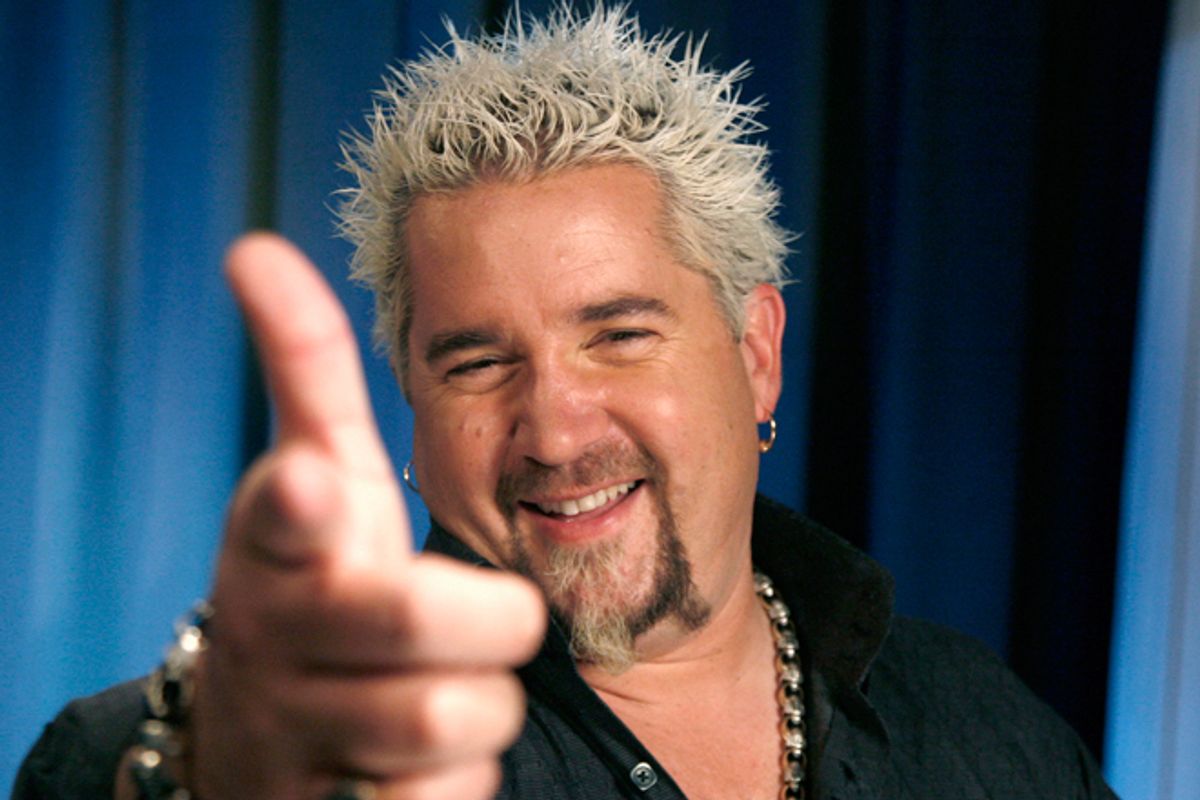 It was an unlikely attack — a strike launched from the Grey Lady and aimed squarely into the heart of raucous, loud, hypermasculine Times Square. It was a carpet-bombing disguised as a restaurant review. Behold our bold new world of both food and journalism – loud and ugly.

In an epic takedown on Tuesday,  the New York Times' Pete Wells peered underneath that famous, brightly colored rock called Guy Fieri and explored the wriggling mass of disgusting horror that is Guy's American Kitchen & Bar in Times Square. The result was unquestionably funny. Written exclusively in the interrogative, Wells' review was a smirking demand for accountability from its spiky-haired, human Ed Hardy tattoo host Fieri, a guy who's such a guy his name is Guy. "When you hung that sign by the entrance that says, WELCOME TO FLAVOR TOWN," demanded Wells, "were you just messing with our heads?"

It was a spectacular rant, one that begged to be forwarded and posted on Facebook walls. And viewed in a certain light, one could argue that Wells was making a statement — a plea for epicurean sanity and restraint, a direct confrontation with Fieri on the contradiction between his keeping-it-real, "rasping out slangy odes to the unfancy places" persona and the utterly nonsensical fare he serves up. Fieri, after all, is a man who confidently appeared on the "Today" show this week to defend himself by saying the review "went so overboard it really seemed like there was another agenda" and insisting, "I'm doing the type of food America loves, and I'm doing it the right way." But while some of us would indeed would come to New York Frickin' City and bafflingly choose, out of all the gustatory options available, to go to Times Square and dine on "tequila turkey fettuccine," I've got to say that if you're the man with the unmitigated gall to charge $12.95 for a peanut butter and jelly sandwich, blow me.

Yet the bad taste the Wells review leaves behind isn't just a product of imagining Fieri's concoctions, redolent of "radiator fluid and formaldehyde." While the review was the flip side of Marilyn Hagerty's amazingly sincere Olive Garden rave, its immediate fame came from exactly the same place Hagerty's did – the clever, self-satisfied knowledge among readers that we are not the sort of people who sully our palates with endless bread sticks or something our proprietor calls, without any shame, Donkey Sauce.

Wells, who recently went out and unnecessarily reviewed the venerable "21," declared it "satisfactory," and prophetically announced, "Readers who look forward to the dark thrill of a public execution on days when there are no stars attached to this column should turn elsewhere to satisfy their blood lust," has a lot more in common with Fieri than he'd probably like to admit. Both Fieri's restaurant and the Times review are guilty of the same crime – of substituting theater for service, mistaking a peacock-like display of bravado for substance. Wells, as nakedly pleased with himself for his strutting as Fieri, might as well have ended his review with a "TA DA!"

What made the piece so arresting, so widely shared, was not that it contributed in any meaningful way to a conversation about food – does anyone read the Times looking for guidance on whether to eat fried ice cream in Times Square? It was that it was in the Times, an institution whose identity is so deeply entrenched in politeness it can't even bring itself to print the name of the STFU, Parents blog or Marc Maron's WTF podcast. It was that the Times had served up bullet-riddled fish in a barrel, an impassioned cri de coeur directed at the most mediocre of targets. In other words, it was behaving like just another random troll on Yelp.

In a world where anyone with a phone can, with just a few finger taps, discern how many stars a movie/restaurant/pair of socks merits, the role of critic is changing — and the Times has very publicly thrashed around the issue of what that role is.  The bottom line is that it's getting harder to write in a meaningful, constructive way, while it is very easy to get attention for stomping your metaphoric feet around. Ultimately, the world needs scathing critiques of Guy Fieri restaurants to the approximate degree that the world needs Guy Fieri restaurants. And if you're going to slam fare that "glows like nuclear waste," you might want to be mindful you're not guilty of dishing out the same.