Early reviews might have been glowing, but nothing on earth glows with the radioactive hokum of "Life of Pi" 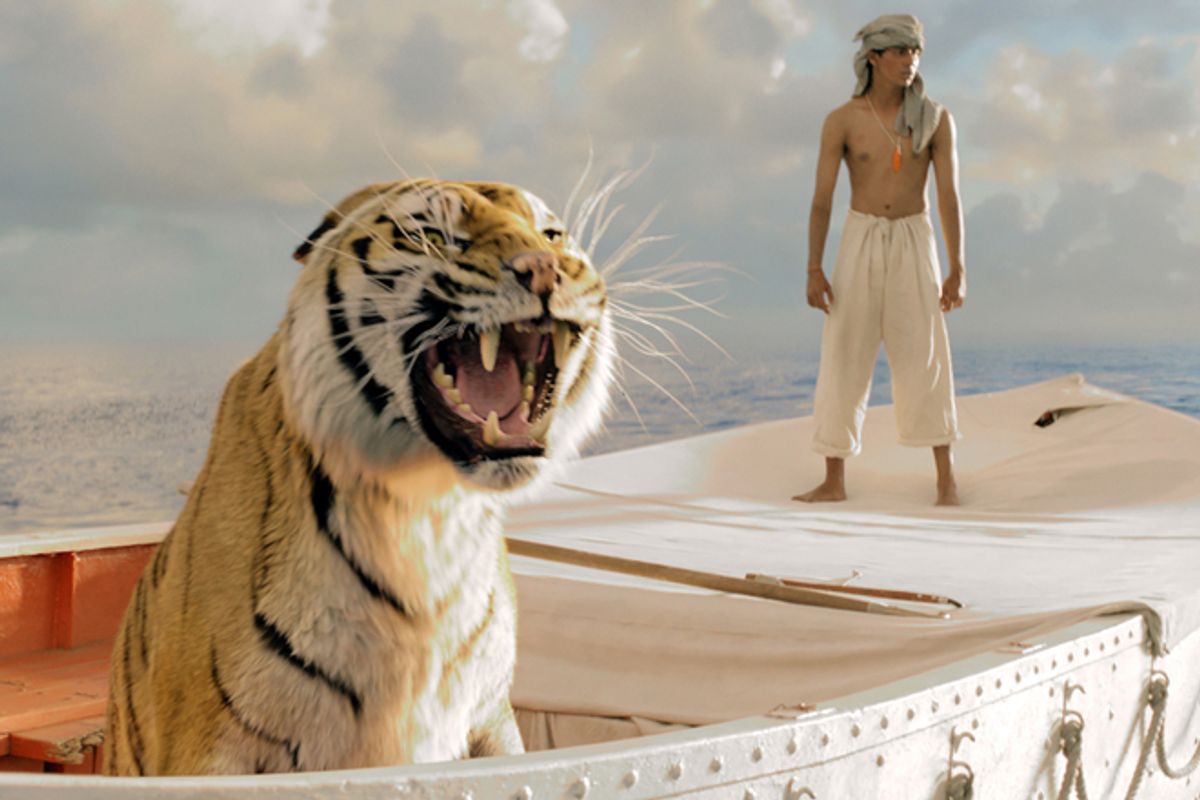 Shimmering with picture-book intensity, Ang Lee’s much-awaited film version of Yann Martel’s bestselling boy-plus-tiger adventure saga “Life of Pi” walks a fine line between transcendent meaningfulness and utter New Age bogosity. Where you identify that line, in art and in yourself, is likely to determine how well you tolerate this movie. As readers of the book already know, “Life of Pi” can be described as a spiritual odyssey or a shaggy dog story (in which the dog is a tiger with a human name). Lee, something of a stylistic chameleon whose previous work includes “Brokeback Mountain,” “Crouching Tiger, Hidden Dragon” and “The Ice Storm,” cranks up the dial in both directions; this picture is part Bhagavad Gita and part Hallmark card from Deepak Chopra.

Many viewers will be enthralled with the sheer gorgeous spectacle on display here, and understandably so. Most early reviews have been glowing, although nothing on God’s green earth glows with the radioactive fervor of this movie. “Life of Pi” is doubtless one of the biggest films of the last several years in terms of cost, ambition and visual imagination, and will obviously play a role in the year’s Oscar race. (Any year that encompasses both “Life of Pi” and “Lincoln” destroys the notion that all prestige Hollywood pictures present the same worldview or strike the same tone.) Personally, though, I wanted out of that damn lifeboat long before the tiger and his companion reached their final destination. I felt like I’d been invited to a seven-course dinner, and all seven turned out to be cake – and then the host insisted on delivering a lecture about how cake would bring me closer to God.

There can be no question that “Life of Pi” is a spectacular visual experience, clear winner of this year’s “Avatar”-meets-“Hugo” prize for pure wow factor. It features colors more dazzling than any found in nature and uses cutting-edge 3-D technology to help frame and tell the story, not just as a staging ground for stunts. One gorgeous tableau follows another, with Lee, cinematographer Claudio Miranda and production designer David Gropman constantly upping the ante in search of revelatory, phantasmagorical moments of pure cinema. Several gorgeous sequences that would have been all but impossible to stage until recently are piled on top of each other: A howling storm at sea, shot from an array of impossible angles; a breaching humpback whale, encrusted with bioluminescent plankton; a sinister glowing island of meerkats, who seem to have escaped from some nightmarish sequel to “Horton Hears a Who.”

Overall, though, I felt as if Lee and his collaborators were taking an unsustainable short cut to the land of maximum wonder. “Life of Pi” tries to get you to that state of quasi-orgasmic, mind-blowing metaphysical whateverness found in the latter stages of Stanley Kubrick’s “2001: A Space Odyssey,” but by way of a charming, somewhat insipid fairy tale rather than an ambiguous science-fiction masterpiece. In fairness, the meaty middle of this movie, when a teenage Indian boy named Pi Patel (first-time actor Suraj Sharma) finds himself orphaned and alone in the middle of the ocean with an outlandish menagerie of companions – an orangutan, a zebra, a hyena and Richard Parker, the aforementioned 450-pound Bengal tiger – is a gripping and startling survival tale, for all its fancy. It’s all the fussy, whimsical architecture around that central story that causes the problem.

Before we get to Pi’s life-or-death struggle to coexist with Richard Parker on that lifeboat, we see him both as an adult and a child. The adult Pi (Irrfan Khan), living in Canada sometime in the future, tells his story to a visiting American writer (Rafe Spall), promising that it will make him believe in God. (Did not have that effect on me.) And then we enter Pi’s implausibly idyllic childhood, back in the Frenchified Indian city of Pondicherry, where his father operates a zoo and the whole setting has a pronounced Eden-before-the-Fall feeling. (I don’t suppose that either Martel or Lee is trying to render India in strictly realistic terms, but I’d love to know whether Indians find this Technicolor-storybook presentation of their country endearing or irritating.)

Pi has named himself after the famous mathematical constant, which is both a transcendent and an irrational number, in preference to his birth name, Piscine, which is the French word for “swimming pool.” I’m damned if I know why any of that is important, but it’s exactly the sort of detail, whimsical and seemingly symbolic, on which “Life of Pi” rests. (Screenwriter David Magee has truncated the story considerably, while sticking pretty closely to Martel’s tone and the order of events.) Raised in a Hindu family that’s not especially devout, Pi also embraces Christianity and Islam, declining to see any contradiction between these competing views of the divine. We are supposed to believe, it seems, that the combination of naivety and sophistication required to follow incompatible faiths will also allow him to survive alongside Richard Parker on the open ocean.

Sharma, a game and appealing physical performer, is the only actor who leaves any impression, largely because the dazzling effects and the 3-D camerawork are the stars of the show. The rowboat and the water in “Life of Pi” are real – much of this film was shot in a gigantic Taiwanese water tank often used for aquatic photography – but Richard Parker the tiger, Pi’s principal antagonist and best friend, is mostly a digital creation. That sums things up, at least for me. It’s tempting to compare “Life of Pi” to “Cloud Atlas,” if only because both are big, expensive effects-driven movies with spiritual pretensions and metaphorical layers of meaning. But I don’t think they’re similar at all, in the end. “Cloud Atlas” is a flawed, messy, passionate film about people, as they hopelessly try to ask and answer the biggest questions. “Life of Pi” is a cleaner, prettier, sweeter and altogether more likable film, about a tiger who isn’t there.