What Philly taught me about Sandy

Three weeks after a hurricane, I ran the streets of Philadelphia -- and found my way home 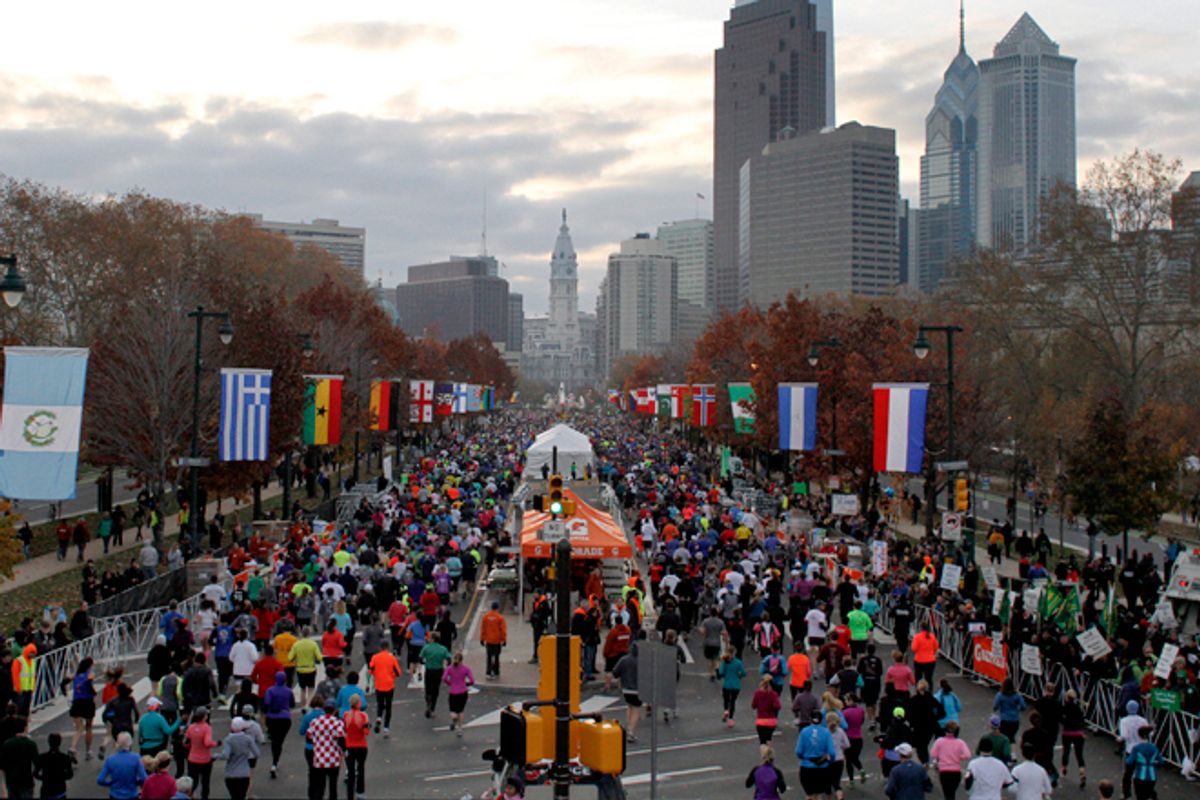 In retrospect, I should have expected nothing less from a city whose very name means brotherly love. Besides, I knew how much Philly could give. I'd gone to school there; I'd forged some of the best and most enduring relationships of my life there. I had returned, again and again over the years, to see my friends and to eat soft pretzels and to introduce my children to the city's charms. Yet on Sunday, Philadelphia gave me – and nearly 1,500 other New York marathon runners – something new. It gave us welcome and warmth and refuge after one of the darkest experiences in the Big Apple's history, just by letting us pound its streets.

After the New York City marathon was canceled in the wake of Hurricane Sandy, thousands of stranded runners from around the world cobbled together their own rituals for the race day. Many ran in a hastily assembled unofficial, fundraising marathon through Central Park. Many, like the members of my team, spent the day volunteering in the now devastated parts of Staten Island, where the race would have begun. And, many, like frustrated lovers on an unconsummated date, also began scouting for another outlet for our energy. Then the Philadelphia marathon, already scheduled for just two weeks after that New York one that never was, generously opened up a drawing specifically for the displaced runners, with half the registration fee going for the hurricane relief effort.

It never even occurred to me not to enter the drawing -- I may not be fast, but I always finish what I've started. There was a strange symmetry in winding up in Philly to do my run, too. The whole reason I'd ever wanted to do a marathon anyway was to mark a milestone in my cancer treatment and to fundraise for a cause that had seen me through a harrowing disease. And then a storm had blown through and changed everything. To run in Philadelphia, as a New Yorker, would be an act of devotion to my home city. To run in Philadelphia, so soon after my best friend there had learned of her own cancer's recurrence, would be an act of devotion to her.

It had been a long, long time since I had walked the streets of Philadelphia in the dark, chilly moments before the dawn. A long time since I'd first arrived as a weird, artsy college freshman and left four years later as a weird, artsy college graduate. And though it had taken six months of training, a few more exhausting maintenance treatments, and a Bolt bus to get there, as I stood near the steps of the Art Museum, I was at last only 26.2 miles from my goal.

The marathon organizers had cleverly put the New York marathon refugees in our own corrals, and given us our own separate starting wave. While the others runners around us took off to the theme from "Rocky," I looked around at a sea of orange shirts emblazoned with the date of a race that didn't happen, and felt that very Philadelphian concept, fraternity, in full effect. Not all of us New York runners were New Yorkers, of course – I'd spent much of the early morning talking to an undaunted runner who'd come in from Chicago. But we were, by virtue of our clothes and our placement, representatives of a city that had recently gone through hell and is going to be going through it for quite some time to come. We were emissaries. And as such, we were so, so welcomed.

One of the good things about getting older is that you can appreciate corniness. All the things you spent the last few decades rolling your eyes at, lamenting at the obviousness of, you can now enjoy without irony again. You can look in the direction of Billy Penn, toward the little house you used to live in with your friend who just started a new clinical trial, and feel unapologetically misty-eyed when the band strikes up "New York, New York." You can run past the bars you used to stumble out of and nightclubs that are now Best Buys while cheering squads blast "Any Way You Want It," and feel deep affection for the people you frequented those places with -- people you will see in a few hours, at a restaurant one of them now owns. You can be moved to pieces by the crowds on the sidelines, holding up signs and yelling, "WE LOVE YOU, NEW YORK." You can appreciate the little murmurs of "Hey, New York" along the way, sometimes from others in orange shirts, and sometimes from the locals. You can understand that when someone shouts, "Come on, New York, you got this!" he's not just addressing you as an individual. You can laugh at the guy in front of you, who's altered his shirt to include a message that reads, "F U SANDY." You can marvel at the perfect timing of crossing the finish line to a song you loved back in college, about running up a hill and making a deal with God.

A bunch of people dashing around in orange shirts doesn't rebuild the Rockaways, or Staten Island, or Belle Harbor. But what happened on Sunday served a different purpose. It was a demonstration of compassion and empathy and pure good-spiritedness. It was a massive, blistered outpouring of support. It was beautiful.

In the weeks since the hurricane hit, I've groped, like everybody else, to come to my own reckoning with it. New York is a very strange place to be these days – a city that is in some places utterly devastated and in other is desperately trying to pull off its best "business as usual" game face. It is, in many ways, one big broken heart.

For me, it took getting out of New York to connect with it again, to find my new, post-Sandy version of that skyline rising from the New Jersey turnpike. It took being someplace else, and experiencing, for the first time, that feeling I remember from the days after 9/11, when the phrase "We are all New Yorkers" resounded around the world. And I found it, in that deep down, gut certainty that we're not alone here. That whatever the miles between us, we still stand together, in the sickness and storms that life deals us. That we are here to love each other. That we are all Philadelphians.