A holiday guide to arguing with your right-wing relatives 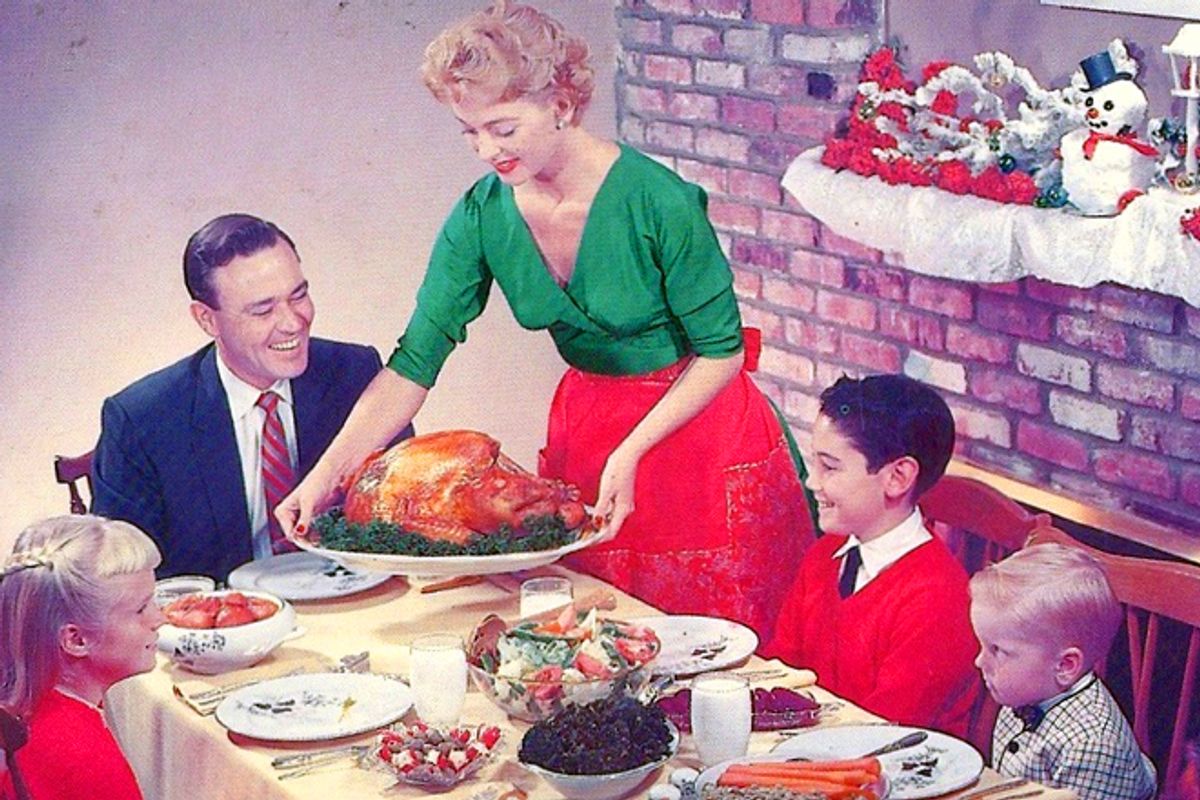 If you actually want to engage your right-wing relatives -- and let me be clear, you really should not do this, you are going to ruin Thanksgiving -- it's best to come prepared. Below, you'll find a series of talking points designed to address some of the most popular current trending topics in the alternate conservative media world. (You'll find last year's guide here.)

Barack Obama stole the election. The proof is the 59 precincts in Philadelphia where Romney received no votes, which is impossible.

Do you know what these precincts in Philadelphia have in common? They are almost entirely black. They are also in ... Philadelphia, where Mitt Romney did not bother to even pretend to campaign. You can count the number of registered Republicans in these areas on one hand. In 13 of these precincts no one voted for the Republican in 2012 or 2008. The thing is, Mitt Romney did not appeal to the urban black working class that much, and he did not try to. The Obama campaign, meanwhile, expended a lot of effort getting as many people in these neighborhoods registered and to the polls as possible. What's shocking is that there weren't more urban precincts where Romney received zero votes. The fact that Mitt Romney got 26,000 votes in the Bronx seems to me more likely to be a horrible mistake than Romney getting zero votes in much of Philly.

No, the proof is that black people voted in Maine.

Yeah, Maine has 15,000 black people, and they have to vote somewhere. But also, calm down for a second and think about this: How would that help Barack Obama win an election, exactly? Shipping illegal fraud voters into Maine is not actually a good way to steal a presidential election. It would've made much more sense to send them to Virginia.

OK, but Obama only won because of the hurricane.

I guess it didn't hurt him, politically, but Obama was winning before Sandy hit the Northeast and he continued winning afterward. Remember, every site that averaged battleground state polls showed the president with an electoral advantage that sometimes narrowed but never went away. Romney was never actually leading. It was only according to the polls that eventually turned out to be the most inaccurate -- Rasmussen and Gallup -- that Romney was beating Obama. According to national polls in general, Romney's "momentum" had stalled before the superstorm.

Obama only won because of Chris Christie.

See above. Again, it didn't hurt, but the president was already winning.

Obama only won because he gave gifts to poors/blacks/gays/Latinos.

Sure. This is also what politics is! When you are elected, you "give" your constituents the "gift" of supporting policies they support. With Republicans the "gifts" are massive tax cuts for rich people and new restrictions on women controlling their own bodies. More federal money for religious institutions and exciting new war airplanes and fewer regulations on companies that make a lot of money poisoning us, things like that. Nice "gifts" that certain Republican constituencies really like. (And let's not forget that both parties promise old people that they will protect the greatest gift of all, love Medicare.)

The Obama "gifts" were all things that are also pretty good policy, like "healthcare for people" and "a brief promise not to deport you for no reason."

The Obama administration did nothing to prevent Americans from being killed in Benghazi and then lied about the attack on our consulate as part of a massive cover-up.

None of the "Benghazi scandal" accusations actually have a coherent motive from the perspective of the Obama administration. Take the most out-there conspiracy: that the White House (or the Department of State) purposely didn't scramble Marines who could've gotten there in time to rescue everyone. Even ignoring the fact that these Marines were hundreds of miles away and totally unfamiliar with the place currently under attack, the idea that armed support was specifically denied by the administration is completely nonsensical. Why would a president seeking reelection actively allow a deadly attack on an American diplomatic outpost to happen? What possible political purpose does that serve?

In the less insane but still incomprehensible McCain/Graham version of the Benghazi conspiracy, the administration supposedly specifically lied to the American people when Ambassador to the U.N. Susan Rice blamed the attack on a "flash mob," when in fact it was al-Qaida.

We have, now, the actual briefing materials the CIA prepared for Rice before she went on the Sunday shows that fateful day. The transcripts of her remarks make it very clear that she was carefully repeating what our intelligence agencies had told her was their current best understanding of what had happened at the consulate. There was no intent to deceive. The CIA still thought there had been a demonstration outside the consulate. It later determined that there hadn't been. Rice did not deny that al-Qaida or an affiliated group could've been behind the attack. The CIA suspected as much but didn't want to reveal too much about its classified investigation by saying which groups it was looking at. (This is the CIA we're talking about; it doesn't want to tell anyone anything.)

But regardless of whether what Rice said was technically accurate according to her understanding at the time, she had no reason to purposely lie. It had already been widely reported that the attack seemed to have been pre-planned, and had been carried out by very well-armed people. It wouldn't have been a "better" incident for the administration if there had been a protest before the horrible attack that killed a bunch of people that everyone already knew about. As Matt Steinglass puts it in the Economist:

A proper cover-up would've involved trying to cover up the attack, not weirdly lying about a tangential detail.

David Petraeus only resigned because of something something Benghazi cover-up.

If he resigned to avoid implicating the administration in Benghazigate, he screwed up, because he testified on Benghazi last Friday.

Oh no, the Fiscal Cliff will kill us all, because of socialism and Obama's debt!

OK, deep breath. The teevee news has been lying to you about what the "fiscal cliff" is and what it means and why it is happening. It is a series of measures designed to cut the deficit very quickly. People are worried about it because cutting the deficit a lot too quickly is ... bad for a weak economy, like ours. That's right, fixing the deficit now is bad for the economy. Even Republicans agree with this, or else they ... would not be worried about "the fiscal cliff." So p.s. you're a Keynesian.

They will most likely avert it by basically doing the exact same thing again and putting forth some sort of huge austerity plan set to kick in like a year from now, and then a year from now we will all have this argument again. What rich CEOs want is a "grand bargain" that "fixes" everything by cutting taxes and slashing Social Security and Medicare, which is something they have always wanted, but that plan has nothing at all to do with averting the fiscal cliff. The cliff is merely being used as a convenient (invented) crisis.

I heard Papa John's and Applebee's are going to fire people because of Obamacare.