Murder on the menu 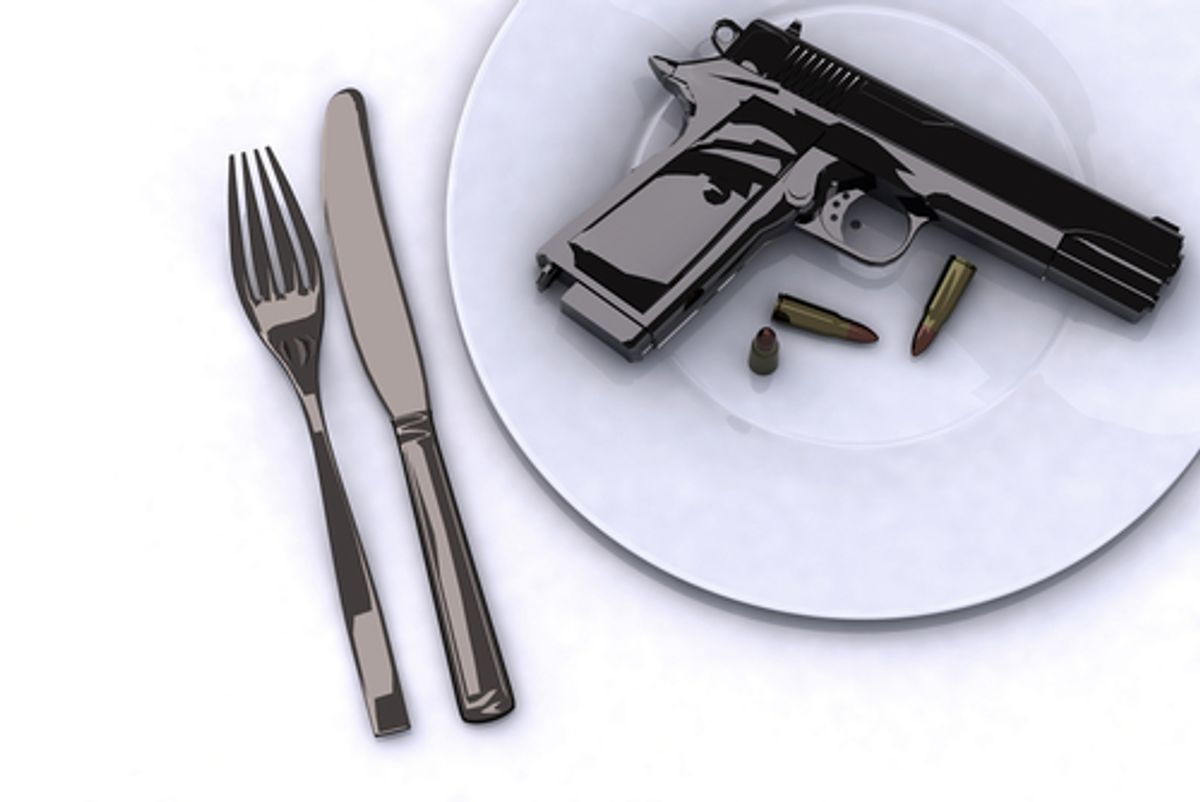 On the third Thursday of every month, top detectives and forensics investigators from around the country gather for lunch at the French-Renaissance-style brick mansion that houses the Union League—one of Philadelphia’s oldest and most elite social clubs.

Jodine Serrin, 39, was found stabbed and beaten to death in the bedroom of her Carlsbad, CA home on Valentine’s Day, 2007.  But the trail to any suspects had long since grown cold, and the Carlsbad cops working the case—Detective Bryan Hargett and Sergeant Mickey Williams—had reached only dead ends.

So on the Thursday in question, Hargett and Williams found themselves eager (and hopeful) lunch guests of the Vidocq Society, whose unique self-appointed mission is solving cases that have defied the best efforts of law enforcement—on the theory that fresh ideas from colleagues can inject new thinking to help unravel even the toughest mysteries.

“Inside that room, you’ve got a combined thousand years of experience … some of the most knowledgeable people in forensics,” says Fred Bornhofen, a former Philadelphia security official and naval intelligence agent with over 50 years of investigative experience, who acts as Vidocq’s “case management director.”

“Investigators don’t often get that opportunity.”

Since 1990, cops and law enforcement types from around the country have been making the journey to Philadelphia for the chance to trade notes and theories with Vidocq colleagues.

Often, the Vidocq Society covers the investigators’ airfare and hotel expenses. The Society is funded by a combination of donations, dues — just $100 per year for each member — and a contract with CBS giving the network exclusive rights to a television series based on the group.

“We’re so unusual, they’ve never been able to come up with a script that works,” Bornhofen said.

Named after the legendary 19th-century French detective Eugene Francois Vidocq, who is considered the “father” of modern criminology (he is credited with the creation of plaster-cast shoe impressions and indelible ink), the society has grown to over 150 investigators from around the U.S.

The Society’s surviving founders are still active members: William Fleischer, whose law enforcement career included stints as a Philadelphia detective, an FBI Special Agent and as the Assistant Special Agent in Charge of the U.S. Customs Service in Philadelphia; and Richard Walter, a forensic psychologist who is one of the pioneers of modern-day criminal profiling.

The third founder, Frank Bender, a forensic sculptor known for an uncanny ability to craft facial likenesses from skulls that had baffled law enforcement, died in 2011.

Much of Vidocq’s involvement in cases is confidential, but The Crime Report received special permission from both the Society and the Carlsbad Police Department to attend and report on Vidocq’s discussion of the Serrin investigation.

The luncheon inquiry began when Bornhofen handed out copies of a brief about the case. As a rule, he makes sure to collect all the copies when lunch is over.

“I burn them in my incinerator, so they don't get out to the public,” Bornhofen explained.

“There’s a lot of experience in the room,” confided Hargett, a few minutes before the room darkened and he started running through a 60-slide presentation.

“Five years later, I still talk to [Serrin’s parents] regularly. We want to get this solved for them.”

The roughly 65 Vidocq members present listened quietly and intently. For this lunch, there were some special invited guests as well: a U.S.  Assistant District Attorney and investigators from the Supreme Prosecutors’ Office of South Korea.

The tragedy had opened with a brief glimpse of the suspect. On that Valentine’s Day, Serrin’s parents walked into her room and saw a man lying on top of her.

Embarrassed, they quickly retreated from what they thought was an intimate moment.

In fact, as investigators later found, she had been dead for between 12 and 24 hours.

But by the time Serrin’s worried parents ventured into the bedroom again, wondering why they heard no sounds, the man was gone.  To their horror, their daughter was badly mauled. Investigators also found evidence of sexual abuse.

As Hargett and Williams presented, those in attendance turned their attention from crème brûlée to crime solving.

The detectives pored through details of the case, pointing out clues, missed opportunities, and possible leads. On the projector screen they wove a tale of a case they had clearly put their heart into.

As the audience studied the photos of the crime scene, they asked questions and gave suggestions.

At the request of both the Carlsbad Police Department and the Vidocq Society, The Crime Report is withholding any detail that might alert the culprit to a new line of investigation.

The questions and suggestions were rapid fire. They covered topics ranging from the location of injuries on Serrin’s body, her lifestyle and associations, DNA retrieval, fingerprint examination, unintentional crime scene symbolism, the psychological profiles of potential culprits—and even the contents of her garbage can.

While Hargett fielded most of the questions, Williams scribbled notes.

“We were really impressed,” Williams said afterward. “We’ve done roundtables before, where we have people with different experience looking at cases, but the (Vidocq Society) has people who have such unique backgrounds.”

Sometimes the club’s real hard-nosed sleuthing comes after the formal presentation of the case, when Vidocq members who think they can offer help or advice line up to discuss their thoughts with detectives.

Dawn Perlmutter was one of them.

Some of the photos of the Carlsbad crime scene struck a chord with her, and she suggested the detectives look into any connection with the occult.

Perlmutter stuck out, not because she’s a woman in the male-dominated world of homicide investigation — about 40 percent of the Vidocq Society’s members are women — or because of her wild mane of red curly hair, but because of her deep knowledge of things few people have the stomach for.

As the Director of the Pennsylvania-based private investigation firm Symbol and Ritualized Intelligence, she has worked with law enforcement agencies around the country to identify ritual symbolism in crime scenes.

But when Richard Walter, the famed forensic psychologist, began to explain his thoughts on the murder, a small crowd gathered.

Walter, whom Bornhofen describes as “the backbone of the organization,” speaks with the confidence of someone who is usually right. He says that homicide scenes tend to reflect the psychological state of the murderer.

“Contrary to popular opinion, the murder is not over when the person is killed, it's over when the killer stops getting satisfaction,” he said during a phone conversation after the lunch.

He argues that most crime scenes fit into subtypes that can help predict a murderer’s motivation. For instance, an explosion of violence marks “anger retaliatory” crimes.

Speaking to the Carlsbad investigators about the Serrin homicide, Walter pointed out what he thought were red herrings---and then suggested that the crime scene was consistent with a particular killer profile.

Hargett and Williams were only the latest investigators drawn by the Vidocq Society’s record of solved cold cases.

When Vidocq Society members discuss previous cases, no homicide comes up more than that of 24-year-old Roger Scott Dunn, who disappeared in Lubbock, TX in 1991.

Although foul play was suspected, it would be over two decades before a body was found. The case had gone nowhere until Dunn’s father, Jim, approached the club for help in 1992.

Walter connected Lubbock police with Scotland Yard blood splatter experts. Despite the absence of a body, they were able to establish that there was enough blood spilled at the crime scene to confirm that Dunn had been murdered.

Walter continued investigating, and eventually tied the homicide to Dunn’s girlfriend, Leisha Hamilton. In 1997, she and co-conspirator Timothy Smith were convicted of bludgeoning Dunn to death.

This past May, Dunn’s remains were found buried not far from the scene of the crime.

The Vidocq Society doesn’t keep official statistics for the success rate of the organization, but Fleischer estimates that the club has made a “direct contribution” to over 40 homicide investigations.

Walter estimates that of the cases presented in the mahogany banquet room, the Vidocq Society has been of assistance in at least 80 percent.

Their victories have included the case of Deborah Lynn Wilson, a Drexel University student whose 1984 death went unsolved for eight years until the Vidocq Society suggested police look into suspects with foot fetishes.

David Dickson, Jr. a security guard who had previously been arrested for stealing women’s sneakers and socks, was convicted of Wilson’s murder in 1995.

Fleischer says the case that sticks in his mind for its “poignancy” is one in which the Vidocq Society helped clear a man of murder.

The family of Huey Cox, a white restaurant worker who was brutally murdered in his Arkansas home, were sure that Little Rock, AR  police had arrested the wrong man for the crime. The Vidocq Society helped the attorneys of Derrick Carlock, a black dishwasher who worked with Cox, prove his innocence.

“We’ve had other cases that maybe are more famous, but that’s the one I still think about most,” Fleischer said.

Contacted by The Crime Report a month after the lunch, the Carlsbad cops sounded optimistic—but noncommittal.

Williams said they were ‘on a path’ towards identifying a suspect.

The society, he said, had pointed them in a new direction.

“We came away with a couple of more things to do, to really cover our bases,” Williams said. “It gave us hope.”