What do you mean, you don't know who Gilda Radner is? 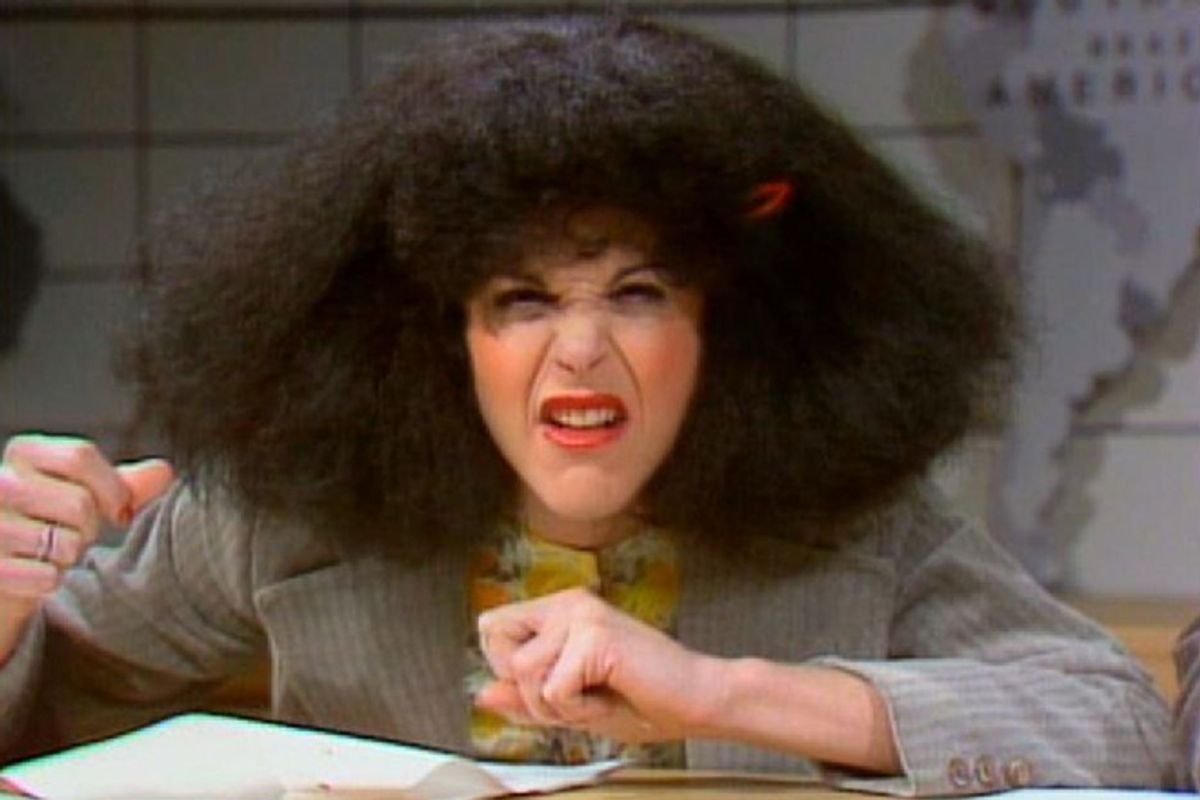 It was sad to hear that some chapters of the Gilda's Club cancer charities have decided to drop Gilda Radner's name from their title because young people no longer know who she was. (See the Nov. 28 post by Salon columnist Mary Elizabeth Williams on the subject.) We say that not just because we love Gilda's comedy, but because we liked who she was as a person. What many people don't realize is that there were some dramatic contrasts between the Gilda Radner you saw on "Saturday Night Live" and who she was behind the scenes.

On-screen, Gilda Radner was fearless. The force of talent that brought to life such characters as Roseanne Roseannadanna, Lisa Loopner, Emily Litella, Baba Wawa and Candy Slice was incandescent. It was the broadness and boldness of Gilda's work that made her, immediately, a bigger star than the other two women in "SNL's" original cast, Laraine Newman and Jane Curtin. Jane was more cerebral and restrained, and it wasn't until later seasons that the show's writers began to recognize and exploit the depth of her talent. Laraine consciously decided to make her mark as "the sexy one," and in many sketches she was sexy indeed. What she didn't have was Gilda's effusive personality, and that kept her from establishing the bond with audiences that Gilda seemed so effortlessly to achieve. As longtime "SNL" writer Jim Downey put it, "Sex bombs are never going to compete with people who want to be loved.”

That quote speaks not only to why Gilda's comedy was so endearing, but also to the contradiction between her on-screen persona and her life off the screen. Many subsequent historians of the show have picked up on a theme that was first revealed in our book, "Saturday Night": "Saturday Night Live" was from its beginning in 1975 a battle of the sexes in which the women performers and writers had to fight for recognition and respect in an intensely competitive, intensely macho creative environment. One of the reasons Gilda triumphed at "SNL" was because the strategies she used to win that fight were more effective than those of her sister performers – which is not to say those strategies would necessarily have won her the radical feminist stamp of approval.

The need to be loved that was a subtext of Gilda's persona on-screen was more overt backstage. Even after she was famous, within "SNL" she was never the Star Who Must Be Reckoned With. She was instead the Lovable Little Sister, a role that made her the perfect foil for the bully-boy personas of John Belushi, Bill Murray and Dan Aykroyd. The comment was often heard in" SNL's" offices on the 17th floor of 30 Rock that Gilda was best in sketches where Belushi threw her around. In the "Saturday Night" scrapbook, a collection of scripts and memorabilia published early in the third season, there was a note to John signed by Gilda that read, “In loving memory of John Belushi, who can hit me without hurting me and who can hurt me without hitting me.” Gilda was also closer than any of the other performers to "SNL" creator and godfather Lorne Michaels, and she was always willing to play the part of daddy’s little girl. Once she left a note for him saying, “Lorne, I’m happy.”

Gilda wasn't always happy, not by a long shot. One friend who knew her well says she had enough of the high-strung, neurotic actress in her that she sometimes hit herself, hard enough to cause bruises. Another friend saw in her an undercurrent of masochism, not unlike those women apache dancers who are flung dramatically around by their men under the glow of a street lamp. “Gilda,” this friend said, “always kept a certain amount of pain and turmoil in her life.” By the time Bill Murray joined "Saturday Night," he and Gilda had begun a long and tumultuous affair, one in which she often played the role of victim. (This was another fact first revealed in our book and much repeated by subsequent histories. It also helped earn us the undying enmity of Bill Murray.)

While Gilda avoided the cocaine habit that undermined many on the original "SNL," she had her own addiction: food. She developed, those who know her believe, into a bulimic in those years, gorging herself and then vomiting, obsessed to the point of physical danger with staying thin. This was yet another of the show's closely guarded secrets (yes, first revealed in our book), although another aspect of Gilda's neediness was a tendency for confession: She once told a reporter she'd thrown up in every toilet in Rockefeller Center.

None of this took away from Gilda's profound dedication to her craft. Jane Curtin was "the normal one" on the original show who went home to her husband at the end of the day, while Laraine Newman succumbed to a defensive negativity that caused her over time to retreat to her dressing room, and into a miasma of drugs. Gilda was the one who was always showing up in the writer's offices, handing out Linzer tortes and improvising ideas that often turned into sketches. If she went home to sleep she kept her telephone next to her in bed, ready to come back to work on a piece. She once appeared on 17 in her pajamas at 2 a.m., claiming she’d actually been dressed when the writer called but that she’d changed into more appropriate attire to come to the office.

In the end it was that combination of talent and dedication, plus an incredibly generous heart, that made Gilda Radner a beloved comedy legend – if not to young people who haven't seen her on "SNL," certainly to generations of female performers who have been inspired by her work there.

Jeff Weingrad, with Doug Hill, is the co-author of "Saturday Night: A Backstage History of Saturday Night Live," available in print and ebook versions from Untreed Reads.