An elegant crime boss, a mild-mannered detective and the world's most valuable necklace make for a ripping yarn 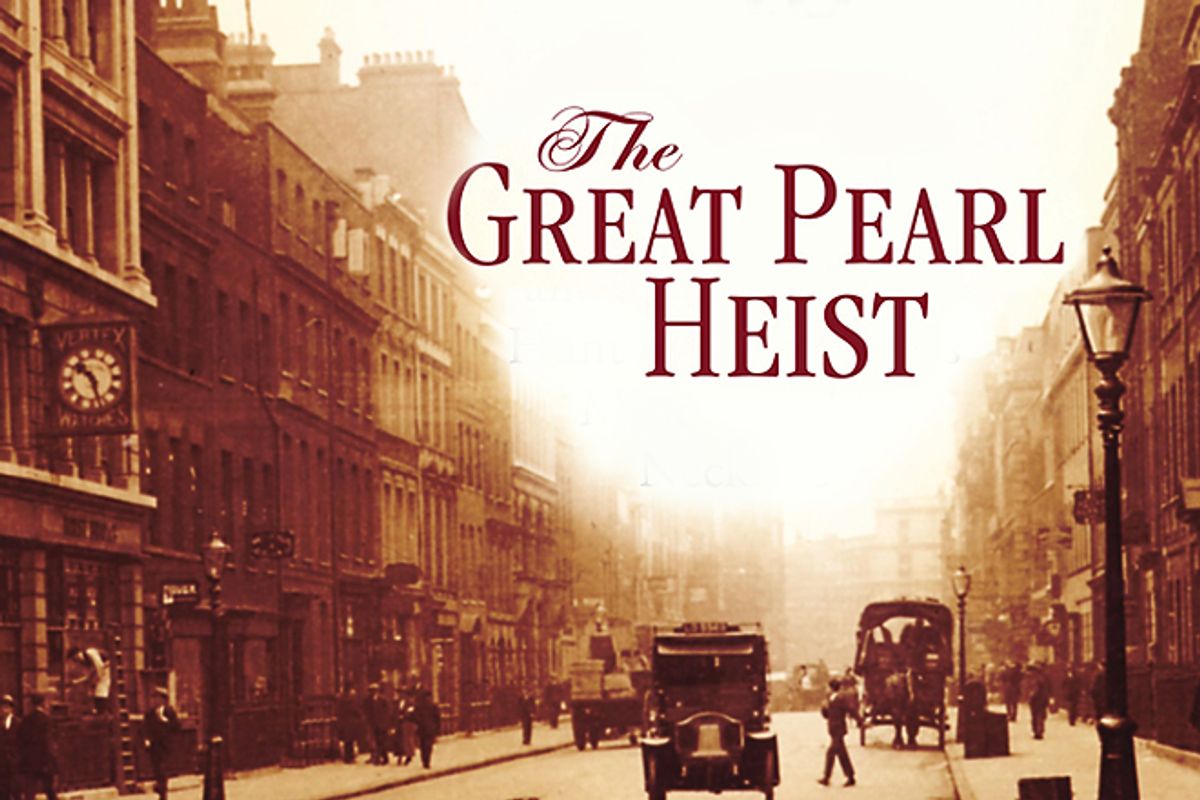 A tall, elegant crime boss; a mild-mannered but brilliant police inspector; a volatile Spanish jeweler; an elaborately planned theft; a cat-and-mouse game in the streets of Edwardian London and the world's most valuable necklace — how is it that no one has turned the true story told in Molly Caldwell Crosby's "The Great Pearl Heist" into a movie? Forget that — why is this the first book to appear on the crime in over 80 years?

Perhaps it's just that the necklace — a gradated strand of perfectly matched pink pearls — lacked a catchy name, or a curse? Nevertheless, this was a significant piece of jewelry. In the early 20th century, before the advent of cultured pearls and when the gems could only be found in one out of hundreds of wild oysters, the necklace was fabulously precious, worth "twice the price of the Hope Diamond" according to Crosby. The New York Times dubbed it "the Mona Lisa of pearls," an odd coincidence since Leonardo da Vinci's painting was also stolen around the same time. The pinching of the pearl necklace -- the property of one Max Mayer, a British jeweler -- did constitute front page news. But Joseph Grizzard, the legendary "King of the Fences" who masterminded the theft, never told his side of the story, so there's been no definitive firsthand account of the caper to move the story along.

Chances are, however, that the current obscurity of this once-famous crime comes down to timing. Mayer's necklace was stolen in the summer of 1913. Within a year, Britain would declare war on Germany, and far more pressing matters would sweep the theft from the public's mind.

Crosby has stepped into the breach, assembling her narrative from an impressive array of sources and then lavishly saucing it with period detail. The crime was contemporaneous with the fictional "Downton Abbey" (Season 1), occurring at a historical moment that Crosby (echoing many other observers, including Virginia Woolf) refers to as "the dusk of England's golden era." The milieu of "The Great Pearl Heist" is less posh than that of the wildly popular BBC series, but no less romantic. It ranges from the glittering, palm-treed lobbies of the city's best hotels and cafes to the narrow streets of Hatton Garden, where the buildings nearly met overhead and an age-old outdoor market convened every day, leaving trampled vegetables and flowers behind to be picked over by the children of the nearby slums. The colorful criminal underworld of the time included a gang of women shoplifters, in operation for over 200 years, known as the Forty Thieves.

Grizzard — who grew up in Whitechapel, not far from the house where police discovered Jack the Ripper's final victim -- was a man of stature in Hatton Garden, a jewelers' district where he posed as a legitimate member of the trade. He was rich, so rich that he didn't need to steal the necklace; he did it, to the puzzlement of the Metropolitan Police, for the sport of the thing. Among Grizzard's other exploits: allowing police to search his home for stolen diamonds while he was hosting a dinner party. The cops found nothing, and after they left, Grizzard returned to his pea soup, fishing "a long string of diamonds from the bottom of the bowl." He was known to possess the Ascot Cup, a trophy that King Edward had ordered made for the iconic horse race out of 68 ounces of gold. It had been nabbed from the grandstand right under the noses of the guards, and Grizzard liked to use it to serve cocktails at parties.

The pearl heist was equally daring, if a lot less flamboyant. It involved quickly extracting the necklace from a sealed box while it was in transit from Paris (where it had been shown to a prospective buyer) to London. Perhaps one of the most astonishing revelations in Crosby's book is that the precious object was transported by mail. Couriers were seen as more vulnerable to smash-and-grab operations (that's how Grizzard got the diamonds in the soup), and to most jewelers "the post office appeared the safest option." Postal officials would bury valuable parcels in mailbags full of garden-variety letters, so potential robbers could not tell which of the hundreds of bags might contain something worth stealing.

The means by which Grizzard's confederates obtained the necklace involved months of preparation, split-second timing, clever subterfuge and bribery. In its place, they deposited a scrap of French newspaper and 11 sugar cubes, also French. Idiotically, many members of the police regarded these items as evidence the necklace had been purloined in France. The first real break in the case came from a pair of cousins, jewelry dealers from Antwerp. They had yet another distant cousin, a man who bragged that he'd participated in the heist. This man, Lesir Gutwirth, was a boastful chatterbox, and turned out to be the weak link in the Grizzard gang.

As is the case with any famous object, making off with it was only half the job. The really tricky part was finding a buyer, and fast, since the longer the thieves held their loot the more likely the police were to catch them with it. Grizzard was a master of such operations, and Crosby describes his practices with considerable gusto. The police (and an investigator from Mayer's insurance company) hoped to engineer a sting in which all four of the major participants in the heist could be picked up at once, necklace in hand. But Grizzard and co. were just as clever; observers likened him to Professor Moriarty from the Sherlock Holmes stories. As the investigation advanced, "plainclothes police watched the gang members watching the detectives watching the thieves. On any given block in Holborn or Hatton Garden, the swarms of pedestrian men and women might be made up entirely of police and thieves disguised and following each other."

So delightful is Crosby's rendering of the intricate twists and turns of the case that, by the time the book gets around to the trial it's a bit anticlimactic. But no matter. "The Great Pearl Heist" is a real-life, old-time Holmesian entertainment -- Conan Doyle's detective hero was invoked even by the journalists of the time. Unlike Moriarty, however, Grizzard was widely considered a good man, one who took care of his staff and even helped them find straight jobs if they so desired. The lead detective on the case, Alfred Ward, liked him, too, visiting Grizzard in prison and arguing for his early release. (Grizzard was a diabetic, and Ward was anxious about his health.) As soon as the prisoner was released, however, he began planning another daring job. Something must have told him that a story this fun simply cries out for a sequel.