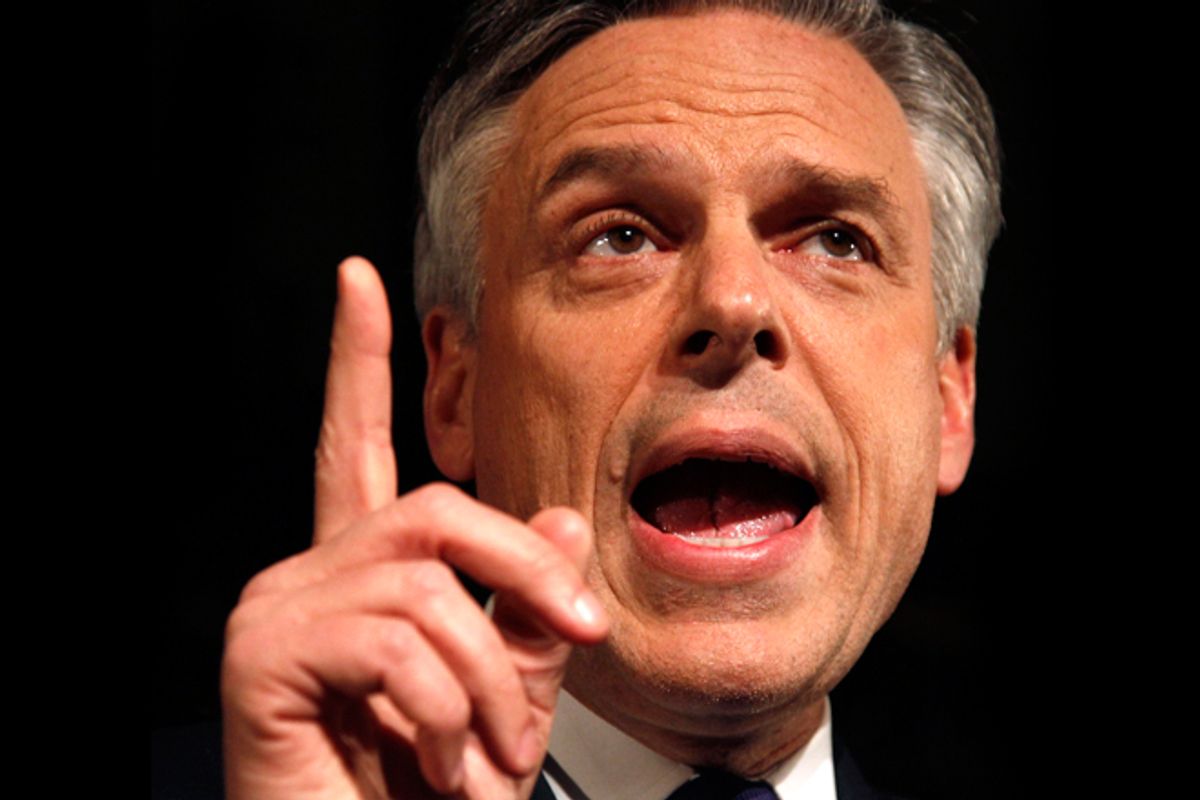 Former Utah governor, U.S. ambassador to China and failed presidential candidate Jon Huntsman has been making the media rounds recently, sitting down with the Huffington Post and CNN, sharing his big ideas about How to Save the Republican Party From Itself.*

Before we get into those ideas, and their merit, something should be made very clear: It doesn't matter what Jon Huntsman thinks, at all. Conservatives should feel no obligation to listen to him, because he has no constituency in the Republican Party -- no allies, supporters or acolytes. Liberals shouldn't listen to him because for all his "the GOP must remake itself in my image" talk, he always conveniently forgets to mention that he's precisely as conservative -- on all the same issues -- as Mitt Romney is. (Or as Mitt Romney became, as the case may be.) His "centrism" is entirely a matter of style and tone.

For the current budget showdown, he proposes ... "entitlement reform," along with a rhetorical openness to the possibility of maybe allowing the top marginal tax rate to rise, which is what makes him a big pinko now, apparently:

"You will have to have some compromise built in, and perhaps even on the marginal rates going up for a certain income category. My going-in position would be: Let's work on phasing out all the deductions and loopholes. There is a trillion dollars there. Let's see where that leaves us and move forward before you start willy-nilly raising taxes."

Is this appreciably to the left of Mitt Romney's position?

Jon Huntsman supported the Ryan Plan. During the campaign, Huntsman proposed what was probably the single most regressive, pro-rich tax plan of any Republican candidate. He called for the elimination of the Earned Income Tax Credit -- which benefits poor people -- along with the abolition of all taxes on capital gains and dividends, which would amount to a massive redistribution of wealth from poor and working people to rich people. This is the guy we're looking to for serious soul-searching about how the Republicans can make themselves appeal to Americans outside the conservative bubble?

Huntsman's actual prescription for the party is to make it more palatable to ... Northeastern Elites. He wants to drop the "crazy talk" in order to focus more on the hardcore economic conservatism. Sure, he's not going to be a Norquistian fanatic on the top marginal tax rate, but his plan is still austerity for most. The thing is, that sort of conservatism doesn't appeal to anyone without money. Race-baiting, immigrant-hating, and war-mongering nationalism are what make the GOP's economic agenda marketable to the masses. The best-case scenario for a Huntsman-led Republican Party is that they pick off some Dem-supporting "socially liberal" rich people in Maryland and Manhattan and maybe Silicon Valley. Enough to harm Democratic fundraising, but not to win national elections.

Since the end of the Reagan era we've essentially had two parties that pursue an economic agenda designed to benefit the rich people, as the poor survive on subsistence benefits and the middle class find themselves joining the poor. The rich people each party represents are generally in different (though often overlapping) industries and sectors -- entertainment and finance for Democrats, energy and finance for Republicans -- but they are the wealthiest all the same. The differentiating factor was that one party also supported welfare state policies that benefited the very poor and the other party also supported "social issues" that appealed to the religious white middle class. A party that did the opposite of Huntsman's prescription -- one that combined real economic populism with conservative religious appeals, as many pre-civil rights Democrats and populists once did -- would almost certainly be much more popular than the current Republican Party. (The enduring popularity of Mike Huckabee, who used to frequently adopt the rhetoric of an economic populist, is evidence enough.) There's a huge "soak the rich and burn the banks down" constituency out there, and the Democrats -- who are terrified of soaking the rich -- currently win it largely by default.

Unfortunately for the GOP (but probably fortunately for us secular social liberals), as Josh Barro pointed out last week, the money guys are going to push the "more secular but still pro-rich" brand makeover. And the money people have been in charge for so long that they've remade most of the Moral Majority people in their image.

Jon Huntsman, though, is not the man to save the party. Nor is his brother in rebranding hucksterism Bobby Jindal, unless he stops talking like a Rhodes scholar and starts acting more like the Kingfish.

*It bears mentioning that at no point does the Huffington Post's Sam Stein disclose that his interviewee is the father of a fairly prominent Huffington Post employee.