Why is Hef getting hitched?

The Playboy icon looks ready to tie the knot. Is it just a stunt? 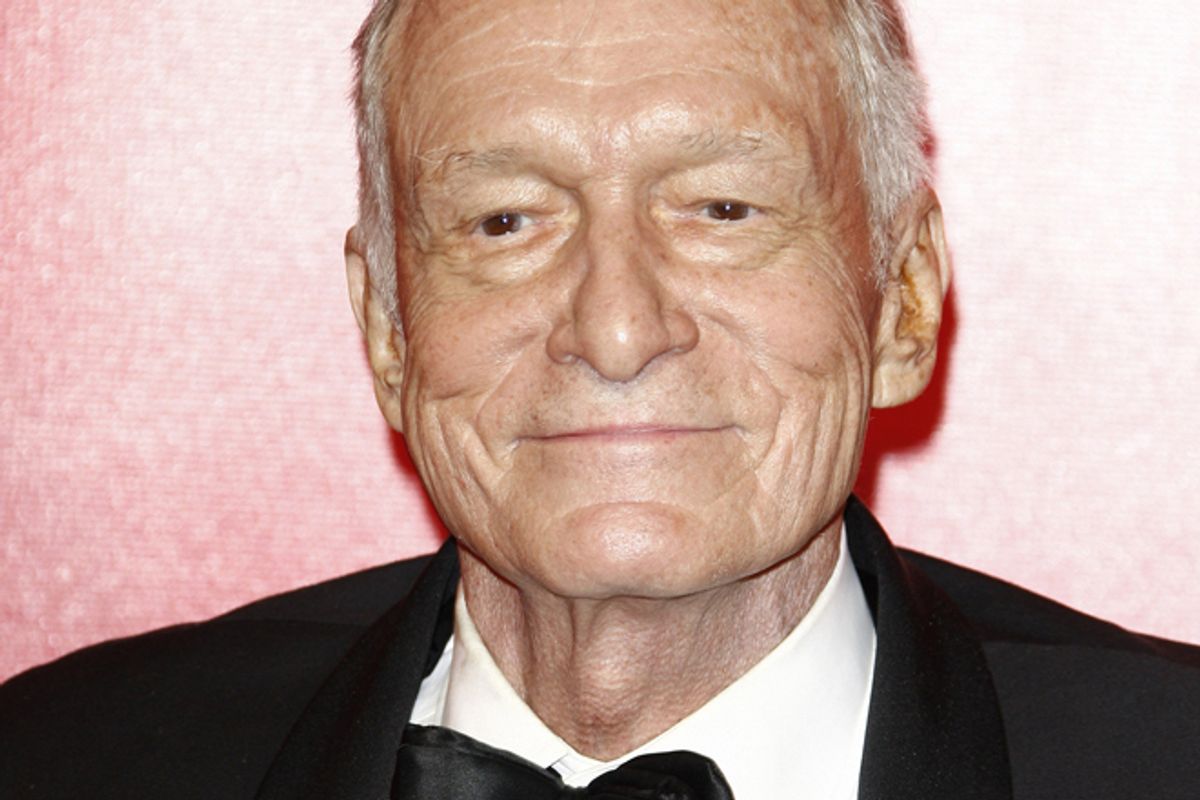 It looks like those two crazy kids are going to settle down at last. In a relationship marked by more fits and starts than Carrie and Big's nuptials, 86-year-old media magnate Hugh Hefner and his 26-year-old lady friend Crystal Harris have spent the past few days making some very public noises that they're back together. Is this yet another attention-getting stunt from the rapidly becoming obsolete Playboy brand, or is this what love conquering all looks like?

It's an unusual twist: The two ended their engagement in 2011, when Harris got cold feet a mere five days before the scheduled nuptials. A Playboy cover featuring "Mrs. Crystal Hefner" had to be hastily slapped with a "Runaway Bride" label. Last summer, however, she moved back into the mansion and confirmed she and Hef were "back together."

But lately Harris has been leaving a not-so-subtle trail of wedding-themed Internet bread crumbs around, all but begging for an eager public to sniff them curiously and go, "Oh, hey! Are you trying to tell us something?" On Friday, she tweeted, "Dear past, thank you for all the lessons. Dear future, I'm ready," a sentiment Hef endorsed with an immediate retweet. And if that's not love, I don't know what is — unless it's Harris' subsequent tweet that she and her boyfriend were singing "Jingle Bells" together. In her Twitter bio, by the way, she now describes herself as the "Playmate of Hef's manor." Over the weekend on Instagram, meanwhile, where her account is under "Crystal Hefner," she flaunted a photo of a "new ring (not that kind of ring)" and photos of "cool ornaments" of a mermaid bride and groom. And then there's the TMZ report from "sources" that Harris and Hefner will be tying the knot New Year's Eve at "an intimate gathering with just close friends and family."

It's quite a turnabout from a woman who, shortly after jilting her bridegroom, said she was keeping the engagement ring and described her sole sexual encounter with her fiancé as a "horror situation" that lasted "like two seconds … Then I was just over it … I just like, walked away. I'm not turned on by Hef, sorry."

So is the possible future Mrs. Hefner suddenly now aroused by her pushing-90 lover? Or is the whole thing merely an elaborate attention-getting device, one in which a young woman gets all the lucrative perks of being the star of the Playboy enterprise, and Hugh Hefner gets to maintain the image of suave lady-killer, a man who is still irresistible to young blondes?

We rarely know what really goes on in the heart of any man or woman, of any age. But it's both strange and a little sweet that for whatever their reasons may be, Harris and Hefner, of all people in the world, would feel the need to pursue a public narrative together that includes walking down the aisle. The already-twice-married Hefner, longtime champion of libertines, certainly doesn't need to roar through the latter half of his ninth decade as anybody's husband. And while the title of Mrs. Hefner bestows a certain celebrity status, it's not exactly a necessary career move.

So maybe it's not just a headline-grabbing routine. There's just this – maybe they want to get married. Because they enjoy each other and they have fun and they can throw a nice party. And they live in California and they're heterosexual, so they can legally do it. He doesn't have to carry her across a threshold or promise to give her babies or whatever other preconceived ideas about how a marriage should start that anybody else may have. And when you're two people who've both spent your lives living outside conventional norms, maybe the most radical, unexpected thing you can think to do is the most traditional one.