The season's other famous-president biopic is a lightweight comedy 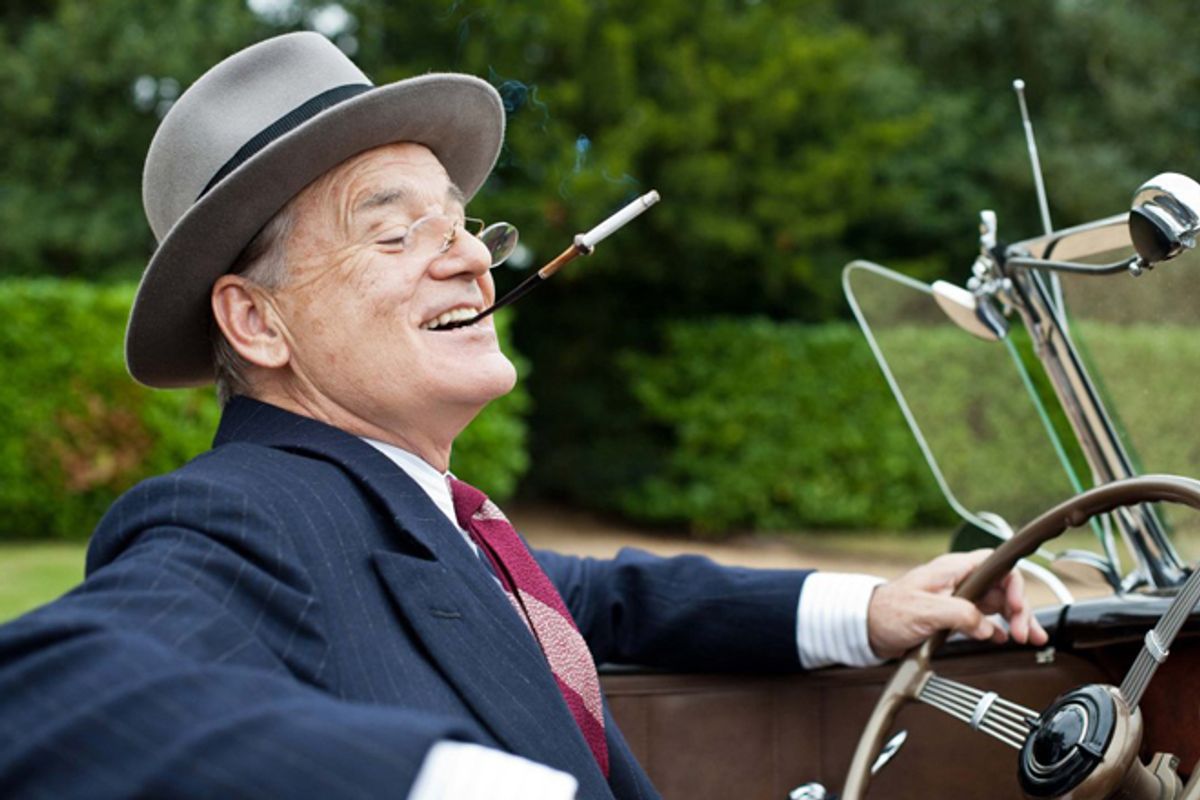 Amid all the heavyweight, full-length movies of this holiday season, full of epic battle scenes, meaningful monologues and moments of brooding contemplation, “Hyde Park on Hudson” occupies a different niche. It’s a nostalgic historical drama involving the president of the United States, the king of England and a hot dog that's free of philosophical heavy lifting, and it's a story of extramarital love that’s barely naughty enough for grandma. It boasts a couple of delicate and understated performances that might make it into the Oscar race – Bill Murray as Franklin D. Roosevelt and Laura Linney as the distant cousin who becomes his lover – but are almost certain to be displaced in a year full of bigger names and more momentous roles.

I quite enjoyed “Hyde Park on Hudson” while I was watching it, but ultimately it feels like a minor picture on purpose, as if it had been deliberately designed to be everybody’s second- or third-choice holiday film. If the whole family’s hopelessly divided about whether to catch “The Hobbit,” “Django Unchained” or “Zero Dark Thirty” the day after Christmas, here’s your solution. This minor episode drawn (or possibly invented) from the life of America’s most controversial 20th-century president will be diverting to all and disturbing to almost none. And it’s short enough that after it’s over you can announce that the cold weather can go to heck and you want some darn ice cream.

When I say that “Hyde Park on Hudson” will trouble few viewers, what I mean is that director Roger Michell (of the quasi-classic rom-com “Notting Hill” and the 2006 “Venus”) and screenwriter Richard Nelson work hard to make the story feel like a bittersweet romantic idyll that you don’t have to think about. It plays like a combination of “My Week With Marilyn” and “The King’s Speech,” and is rather too obviously in thrall to those models. But beneath the film’s gentle tone, it depicts FDR as a blithe, womanizing creep who makes JFK and John Edwards look like bumbling frat boys – and depicts him surrounded by an ever-expanding posse of females who accepted his tomcatting as the natural order of things.

I’m not claiming this is unassailable historical truth (although it fits the evidence pretty well), and I would agree that it’s important to put things like this into context: Powerful men have behaved this way for millennia; Roosevelt’s alleged relationships involved consenting adults; sex and gender issues were very different in 1930s America than they are today, and it’s no good exporting our supposedly enlightened values into the past. But the real flaw in “Hyde Park on Hudson,” which isn’t fatal but introduces a weird and troubling undertow, is that it allows all these issues to come up, ever so briefly, before briskly sweeping them under the rug and slamming the door.

Chronology is pretty vague in “Hyde Park on Hudson,” as is point of view, historical import and the sun-splashed cinematography of Lol Crawley, among other things. Our principal focus is on Daisy (Linney), an impoverished “fifth or sixth cousin” to the Roosevelt family who is summoned to the president’s eponymous rural estate in Dutchess County, N.Y., by his imperious mother (Elizabeth Wilson), to keep him company during a period of rest. I think that puts the beginning of the story around 1937, in Roosevelt’s second term, when the strains of office were beginning to take a toll on his frail physique. (No one with FDR’s litany of health problems could easily be elected president today, even setting aside the disability that was never openly discussed.) But the film strays from Daisy’s perspective whenever it’s convenient, showing us events she does not witness and couldn’t know much about, including private conversations between Roosevelt and King George VI, aka Bertie the famous stutterer (the Colin Firth role from “The King’s Speech,” played here by the modestly agreeable Samuel West).

Daisy has no last name in the movie but is clearly modeled on FDR’s real-life cousin Margaret Suckley, who became (at the very least) an intimate friend of Roosevelt’s from the early ‘30s onward. In the movie their relationship is limited to FDR’s Hudson Valley retreat, but in fact Suckley spent a good deal of time at the White House and was with Roosevelt when he suffered a fatal stroke at the “Little White House” in Warm Springs, Ga., in 1945. There’s no direct evidence that Roosevelt and Suckley’s relationship was sexual, but it’s not much of a stretch. He is known to have had an on-and-off affair of many years with Lucy Mercer, Eleanor Roosevelt’s social secretary, and is widely assumed to have been similarly entangled with Missy LeHand, his own personal secretary (played nicely here by Elizabeth Marvel). It’s important to make clear, however, that no living person knows for sure and the case made by Nelson’s screenplay (based on his own stage play) is full of guesswork and supposition.

Anyway, Linney’s Daisy is a wonderful creation, a highly recognizable country lady of good breeding and almost no funding, and I only wish she were less a narrative convenience and more a fleshed-out protagonist. Always a subtle and fascinating performer, Linney has evolved into one of our finest screen actresses without quite becoming a star. It’s old news to say that Hollywood is a harsh environment for middle-aged women, but she proves the point. In her late 40s she’s perceived as a smidgen too old, and too WASPily specific, for most mainstream leading roles (I’m not agreeing with that, people!), but hasn’t made it into the Meryl Streep-Helen Mirren grande dame category.

Bill Murray’s FDR is clearly more of a headline-grabbing performance, and without seeming to work hard Murray captures many elements of Roosevelt’s contradictory personality: His calm political confidence, his physical anguish and the sense that tremendous emotion lies beneath that aloof, aristocratic demeanor. (To call Roosevelt a WASP is factually incorrect and misses the point. He was a Knickerbocker, an old-line New Yorker of Dutch descent, next to whom the WASPs are hot-blooded immigrants fresh off the boat.) But Daisy really remains the focal point of the movie, and she only sees FDR outside of working hours, careening through the countryside in his custom-made, hand-drive convertible or giving him a discreet hand job amid a field of spring wildflowers.

In the end, “Hyde Park on Hudson” is halfway about the irresolute relationship between Daisy and her cousin, where a peck on the cheek counts as high passion, and halfway a comic melodrama about King George and Queen Elizabeth’s famous visit to Hyde Park in the summer of 1939. It was the first time a British monarch had been to the United States, thawing a relationship that had grown pretty chilly during the interwar years and beginning the process that led to the American entry into World War II. There are quite a few enjoyable supporting performances, especially Olivia Williams as an arch and angular Eleanor Roosevelt (who by this time doesn’t even pretend to live with her husband) and Olivia Colman as the fabulously neurotic English queen, convinced that eating hot dogs at a picnic is loaded with dark symbolic meaning and will demean nine centuries of monarchy.

What this movie never offers is some compelling reason for combining these overlapping but unrelated snippets of fictionalized history, or indeed any reason for existing at all beyond the utilitarian. (If you’re reading this in the summer of 2013 while evaluating pay-per-view options in some hotel room: Yes!) To be fair, there’s one wonderful scene that hints at some fusion of surface and meaning, and it comes from Laura Linney and has nothing to do with the so-called story. Exiled from the fancy dinner party that the president and first lady are hosting for their royal visitors, Daisy heads outside to the great drive and hangs out with the bored chauffeurs, a passel of local guys she’s known all her life. It’s great to see them all working, she jokes, even for one night. And a shadow crosses her face, just for a moment, as if it occurs to her to wonder whether she's working too.