Why does "The Hobbit" look so weird? 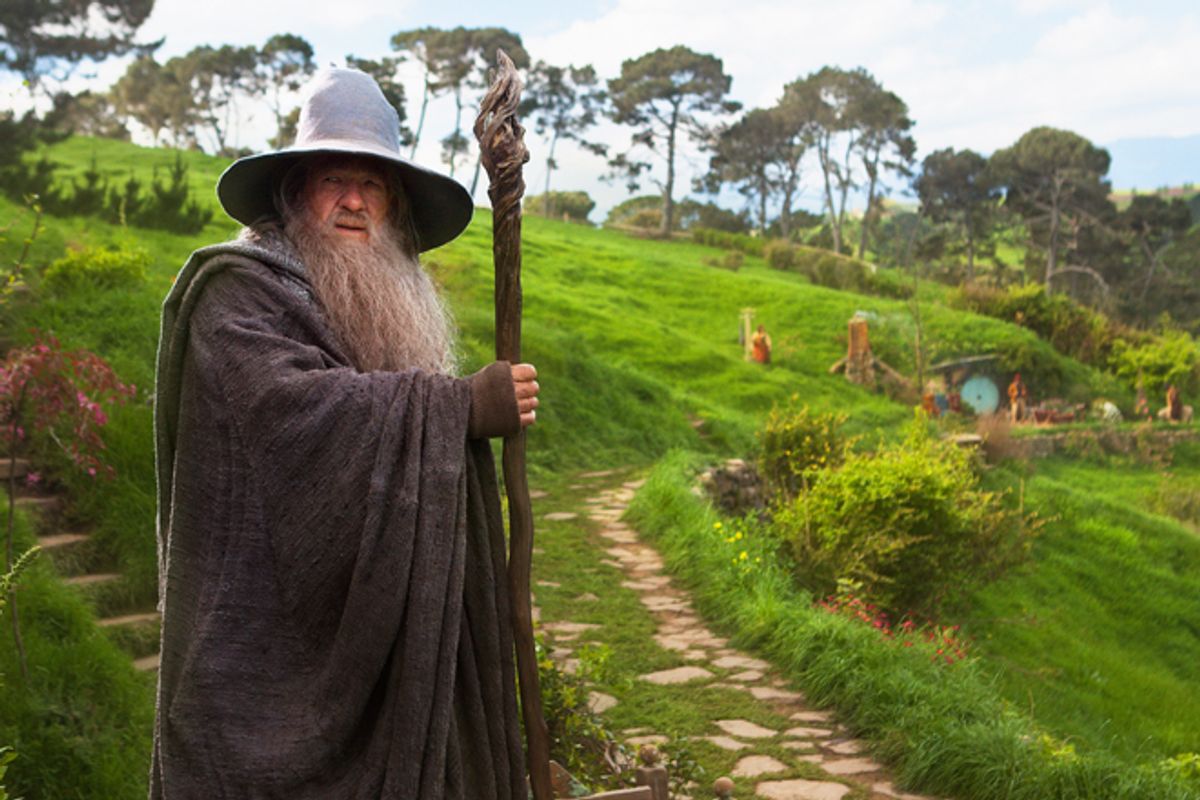 Ian McKellen in "The Hobbit: An Unexpected Journey"
--

No movie all year arrives with the crazy fan anticipation of Peter Jackson’s “The Hobbit: An Unexpected Journey,” which has morphed from being a straightforward adaptation of J.R.R. Tolkien’s 1937 children’s novel into the first installment of a full-blown (and perhaps overblown) prequel trilogy to Jackson’s “Lord of the Rings.” I’ll have a great deal more to say about all that next week, when “The Hobbit” finally reaches theaters. But without jumping the gun on a full review, there’s a technical and aesthetic issue we can talk about right now, one that has provoked considerable anxiety among LOTR fans ever since Jackson previewed some footage last year, and one that could poison the movie for many viewers.

“The Hobbit” looks really, really strange. At least it does when projected in 3-D, at the 48 frames per second rate (known as high-frame rate, or HFR) that Jackson intends as the preferred format. (The movie was shot on the latest iteration of cutting-edge digital video, using a brand-new camera called the Red Epic that was developed alongside the film.) Granted, most viewers probably won’t see it that way; outside major cities, theaters will primarily screen “The Hobbit” in more familiar formats, either 3-D or 2-D, at a conventional frame rate of 24 frames per second.

It’s not easy to describe the hyperreal, ultra-clear, sharp-edged look of the 48fps image, except by way of analogy. As one critic was heard to say on the sidewalk outside a Manhattan screening, “I turned that setting off on my TV.” Some viewers have said that “The Hobbit” has the harsh video shimmer of a 1980s soap opera, with, of course, many times the resolution. Another guy I know said the whole movie looked like a cutting-edge screen saver from the early days of digital imaging, around 2000 or so. That’s getting close. To me, “The Hobbit” looked like a prototype of some new computer game, or a demonstration video that some dude at Best Buy was using to sell a $1,700 HDTV monitor while murmuring, “Someday, man, all movies will look like this!”

Tastes vary, to be sure, and I have no doubt that some people will embrace the precise, knife-edged shadows, the uniform richness of detail and the startling depth of field, in which both the near foreground and the distant background appear in identical focus. But for me, at least, this cinematic innovation apparently meant to create an atmosphere of magic realism makes the whole thing look immensely more fake. Mountains and fortresses that are presumably digital creations look like painted backdrops; humanoid figures of hobbits, dwarves and wizards appear just as artificial as the goblins, specters and trolls. Most of all, Jackson’s Middle-earth now glows with an eerie, yellow-green inner luminescence, as if Sauron had nuked the whole place eons ago and it’s all a radioactive mutant paradise.

Whatever terminology you want to come up with, the look of “The Hobbit” will unquestionably influence both critical and popular responses to the film. There may be an element of generational divide here; in my informal conversations and Internet exchanges with people, younger viewers reared on video games and all-digital CGI-driven movies have been far more willing to take the leap. Personally, I found the Thomas Kinkade-like glow of “The Hobbit’s” images both fascinating and disconcerting, and felt that it accentuated the movie’s other flaws. But that’s a topic for later.

It definitely isn’t just me. In a Facebook post, blogger and critic Sasha Stone (who runs the site Awards Daily) protested that after seeing “The Hobbit” she didn’t even feel as if she’d seen a movie: “How do you even write about that except to say: OH MY GOD, the 48fps will ruin movies forever.” Columnist Steve Pond of the Wrap, a self-described “diehard ‘Lord of the Rings’ fan,” piled on the pejoratives in trying to describe the film’s look, finding it “disturbing and uncomfortable” and concluding: “Jackson has taken a familiar and beloved land, the Middle-earth of his and Tolkien's imagination, and turned it into a disquieting and unfamiliar environment.”

In mixed-to-negative reviews that have already appeared in the Hollywood trade papers, critics have focused on the peculiarity of the visual experience, which Todd McCarthy of the Hollywood Reporter describes as “ultra-vivid television video, paradoxically lending the film an oddly theatrical look.” Variety critic Peter Debruge writes that “everything [in ‘The Hobbit’] takes on an overblown, artificial quality in which the phoniness of the sets and costumes becomes obvious, while well-lit areas bleed into their surroundings, like watching a high-end homemovie.” In the New York Film Critics Circle award balloting, "The Hobbit" got several votes in the animated-film category, apparently indicating a belief that the film's level of artifice was so high it could no longer be considered live action.

So why did Jackson decide this was such a great idea? The answer is pretty much that he’s a geek and can’t help himself, and geek-types like him clearly believe this is the way of the future for big-budget mainstream movies. Jackson admitted to Steve Pond that it took him a while to get used to the hyperreal look of HFR, but that “once I made the adjustment, I thought it … took advantage of 3-D in a way that 24fps can’t do.” I agree with this, by the way, despite my reservations about the whole project. The 3-D images in “The Hobbit” are crisp and clear, and lack the murky, light-robbing quality of most 3-D movies.

In a revealing interview with Bill Desowitz for Anne Thompson’s blog on Indiewire, Jackson says that the switch to HFR has a marketing and even philosophical motivation, and is about bringing younger audiences back to movie theaters. "The real question is: Do we basically sit back and continue to watch audiences dwindle and surrender to kids watching movies on iPads, or do we see what we can do with the technology today to enhance the cinema-going experience?”

It’s a legitimate question, but whether HFR is the panacea that technophile filmmakers like Jackson and James Cameron expect it to be – the “Avatar” sequels may be shot at 60fps, another step up – remains to be seen. Christopher Nolan hasn’t had any difficulty getting people to come see his movies, which so far have all been shot on old-school motion picture film, without using 3-D. But there’s no question that the popular conception of what a movie looks like is shifting rapidly, and Jackson’s huge aesthetic and technological gamble on “The Hobbit” will affect how people think about his cinematic legacy from now on.