All work and no play — or you're fired! 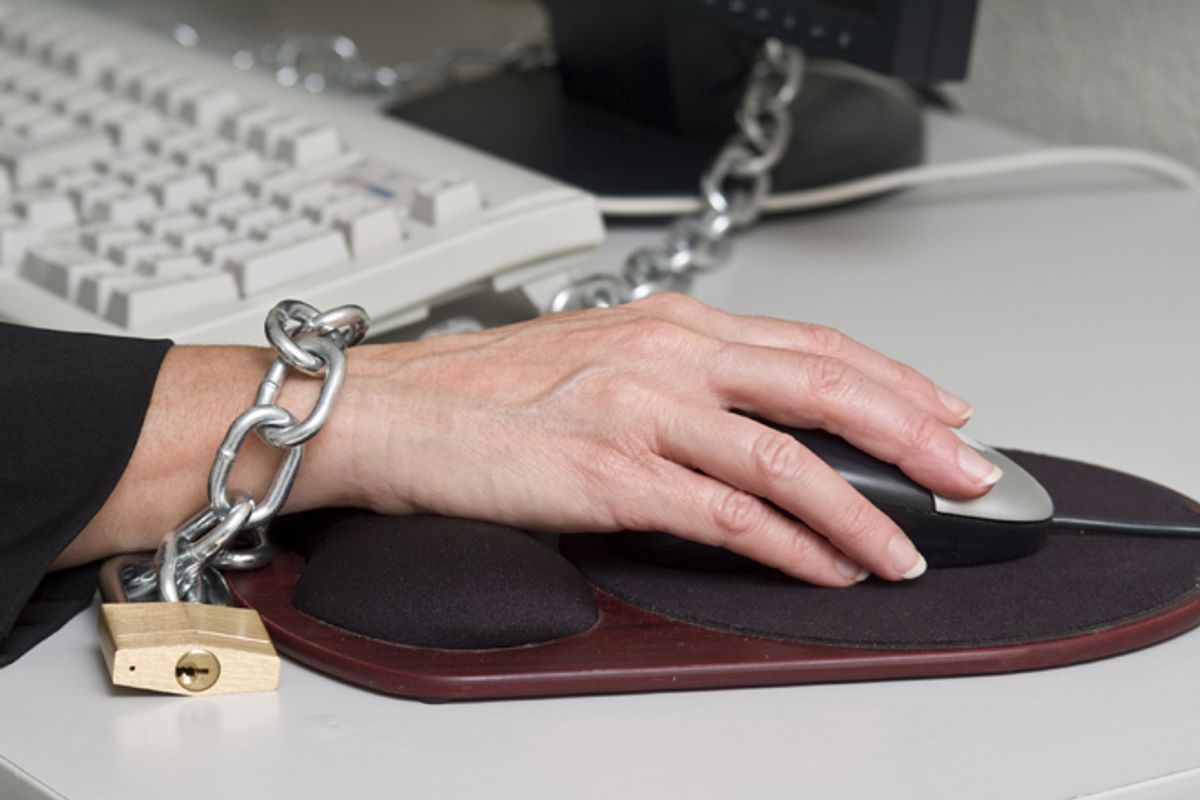 Dalkey Archive is a prestigious small press that publishes both new and classic works of fiction, nonfiction and poetry. But the press, which boasts of bases in London, Dublin and Champaign, Ill., doesn't merely distribute memorable works that founder John O'Brien describes as "saying something that people don't want to hear — that will make them feel uncomfortable." Au contraire – the press is pretty damn avant-garde and uncomfortable even in its job postings.

In a posting that went up on Tuesday, Dalkey explained it is currently in a period of transition, as it seeks to find a successor to its founder and expand its international offices. It needs new blood. Blood "primarily derived from unpaid interns in the first phase of this process." And who might you be, unpaid yet eager intern, or possibly even maybe paid employee? You're the total package. You're "willing to start off at a low-level salary." "Doing whatever is required to make the Press succeed." Also, you have no life. None. Seriously. You "do not have any other commitments (personal or professional) that will interfere with work at the Press (family obligations, writing, involvement with other organizations, degrees to be finished, holidays to be taken, weddings to attend in Rio, etc.) … DO NOT APPLY IF ALL OF THE ABOVE DOES NOT DESCRIBE YOU." It continues, "Any of the following will be grounds for immediate dismissal during the probationary period: coming in late or leaving early without prior permission; being unavailable at night or on the weekends; failing to meet any goals; giving unsolicited advice about how to run things; taking personal phone calls during work hours; gossiping; misusing company property, including surfing the Internet while at work; submission of poorly written materials; creating an atmosphere of complaint or argument; failing to respond to emails in a timely way; not showing an interest in other aspects of publishing beyond editorial; making repeated mistakes; violating company policies." I'm not saying that sounds a mite harsh, but I've seen cults with more laissez-faire policies about outside socialization.

So bizarre, so draconian, so thoroughly out there was the posting that when it began circulating around the Internet Wednesday, some thought it some elaborate postmodern jest. But while O'Brien did not reply to Salon's request Wednesday for clarification on the posting, he told the Irish Times Thursday, "The advertisement was a modest proposal. Serious and not-serious at one and the same time. I’ve been swamped with emails (I wish they'd stop: I've work to do), and with job applications … Strangely, no one (except the applicants) seems to have noticed that jobs are being offered: When does this happen with internships? In brief, I take internships very seriously, and take on only people I think might be a future employee." Sure. After a "rigorous and challenging probationary period" of never making a single mistake, challenging authority or having any outside interests.

Those with firsthand experience with the company say the listing is pretty indicative of the environment. "I worked at Dalkey Archive Press," a friend of a friend noted on Facebook Wednesday. "My job description did not specify 'Kiss John O'Brien's ring,' but that was the general vibe." And a follower on Twitter said, "I once applied for an editorial assistant job with that very press. WORST INTERVIEW OF MY LIFE … O'Brien blew cigar smoke in my face for two days straight & set up unanswerable interrogation traps. For less than $25K!"

While you've got to give Dalkey credit for not mincing words, you've also got to wonder what kind of person he's really hoping to attract -- attract to a business that ostensibly exists to celebrate creative thought. As a friend – one who happens to be a successful book editor at a literary press – noted Wednesday, "I'm sure their ideal candidate -- a cowed, brainless robot with no opinions, ambitions, or life outside of the office -- will bring a lot to the table." And a noted editor-author translated the listing as "Wanted: Ivy-educated, masochistic, lobotomized friendless orphan prostitutes willing to be locked inside a sweatshop." It's an odd way to do business, especially when an author jumped into the fray to insist, "In all seriousness John O'Brien is a great editor. I couldn't be happier with the way he published two of my books."  Great editor -- but an absolutely amazing job poster. Just goes to show that in some quarters, making books can be as ugly as making sausage.