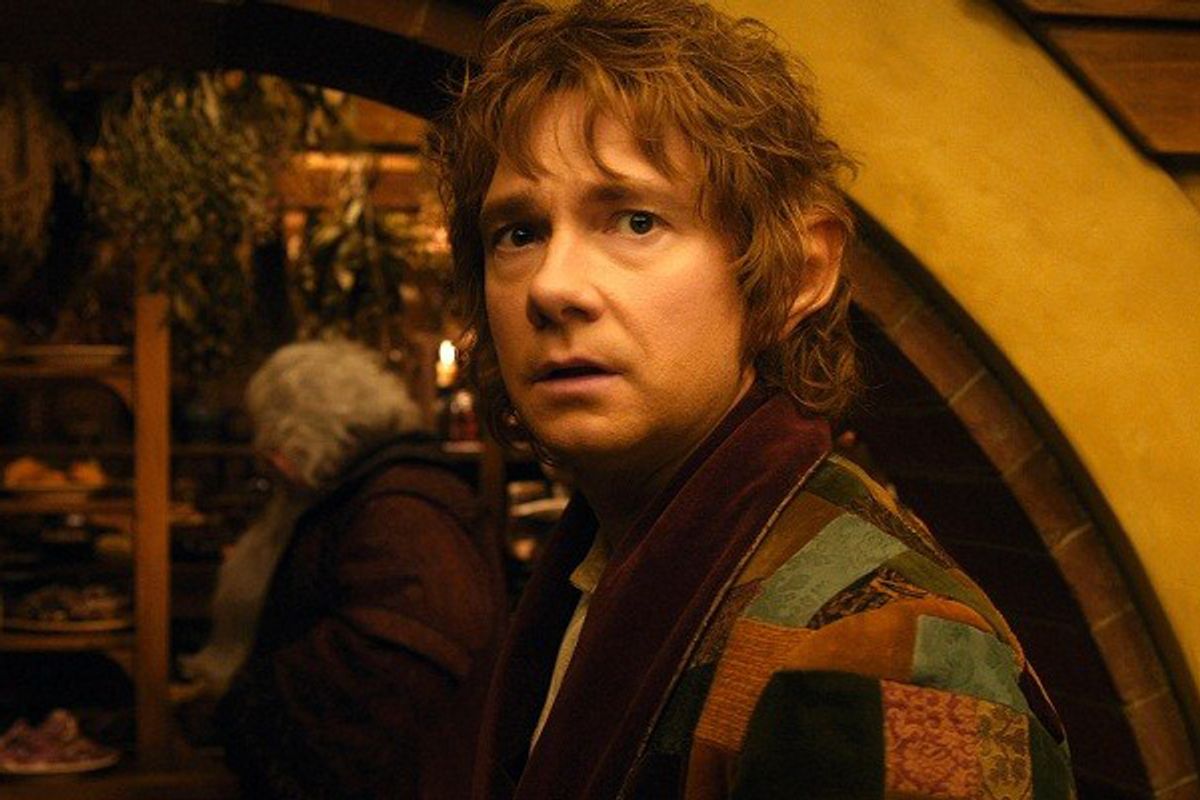 Martin Freeman in "The Hobbit: An Unexpected Journey"
--

So let’s jump right in: Is Peter Jackson’s “The Hobbit: An Unexpected Journey” a gaseous and self-indulgent disaster, a “Phantom Menace”-scale overinflated blimp of a movie that casts retroactive shadows across Jackson’s “Lord of the Rings” trilogy? Counsel is leading the witness, as they used to say on “Law & Order,” but those were among the thoughts I had after leaving a screening of the first installment of Jackson’s prequel trilogy, especially as seen in the eerie and distracting 48 frames per second 3-D format. (The best single description of which came in a tweet from Salon contributor Bob Calhoun: It “looks like Jehovah’s Witness art.”)

On further reflection, I have concluded that the answer is mostly no, or at least not quite, and that it’s largely a matter of expectations. If you arrive at “The Hobbit” via the flatulent mediocrity of most contemporary fantasy films and fantasy fiction, it looks pretty damn good. Hell, if you liked, say, “Percy Jackson & the Olympians: The Lightning Thief,” or halfway tolerated “I Am Number Four,” then this is a masterpiece. Look, it’s a holiday film full of action, adventure and ornate visual tableaux, balanced between high-flown language and slapstick humor (indeed, snot humor), and somewhat faithful to the letter if not the spirit of its source material. It's definitely OK for most children down to about 10 or so, and most viewers will have a pretty good time. So on that level, there's really no problem.

But we all know that’s not the valid standard of comparison. Jackson’s “Lord of the Rings” trilogy certainly has its detractors – among them J.R.R. Tolkien’s embittered son and literary executor, Christopher Tolkien – and one can nitpick its minor heresies and aesthetic wobbles. But it’s a magnificent accomplishment, one that set the standard for serious cinematic fantasy. Many, many people will yearn to love “The Hobbit” simply because it exists and because it reunites us with a familiar world and some old friends. Most notable of those are Ian McKellen as the wizard Gandalf (albeit looking noticeably older, 60-odd years in the past) and Andy Serkis as the voice of motion-capture creation Gollum, possessor of a certain trinket that is more Precious and more dangerous than he knows. And, yes, the “Riddles in the Dark” sequence between Gollum and hobbit interloper Bilbo Baggins (Martin Freeman), which sets up so much of what is to follow, is a very fine piece of filmmaking.

I have no desire to deprive people of the joy of reentering Jackson’s Middle-earth, believe me. But I am advising you to keep your expectations modest, and confessing that to my taste this new trilogy gets off to a sour, soggy, bumbling start. Through a lengthy production process that involved the contentious hiring and firing of another director – Guillermo del Toro gets one-fourth of the screenplay credit, but has otherwise disappeared from the project – Jackson has inflated both “The Hobbit” and his own head to monstrous proportions. Along with his legions of fans, Jackson is apparently now convinced that he and his team of collaborators (the writers are Fran Walsh, Philippa Boyens, Jackson and del Toro) possess a Joseph Smith-like relationship with Tolkien’s spirit and are uniquely qualified to transfer his visions to the big screen. Ironically or not, this has resulted in a gargantuan new project that takes enormous liberties with the source material. This is a sprawling, shambling, full-length prequel to Jackson’s “Lord of the Rings,” but not so much to Tolkien’s.

What we see here bears only a loose resemblance to the actual 1937 text of “The Hobbit,” a genial adventure yarn whose story would have comfortably fit within an ordinary 100-minute feature film. It’s more like an “inspired by” than a “based on,” introducing numerous episodes that are barely mentioned in Tolkien’s “Hobbit” or occur entirely behind the scenes, and importing considerable material from the author’s voluminous explanatory appendices to “Lord of the Rings.” (In case you’re wondering, Jackson et al. have to keep their paws off everything in “The Silmarillion,” Tolkien’s compendium of deeper Middle-earth history and legend, because they don’t own the rights.)

So it is that while homespun hobbit Bilbo and his innumerable and indistinguishable dwarf companions wander, very slowly, across Middle-earth toward a liaison with the fearsome dragon Smaug and his treasure trove in the Lonely Mountain – and that’s “smowg,” not “smog,” by the way – we get various detours that aren’t in the book. There’s an enormously disappointing side trip to Dol Guldur, an abandoned fortress in the forest that ought to be incredibly sinister but looks instead like a Scottish tourist destination. Someone called the Necromancer has taken up residence there – and if you don’t already know who that is I’m not telling -- an ill-defined specter who seems to have beamed in from the Starship Enterprise when Scotty didn't have the machine set right. Seriously? They spent the gross national product of Moldova on special effects and that’s what we get for the freakin’ Necromancer? (I’m still pissed, by the way, about Jackson’s decision to portray You-Know-Who in “LOTR” as lacking physical form. I think that’s both factually wrong and dramatically dumb.)

But Dol Guldur isn’t half as bad as the nature-loving wizard Radagast the Brown, a pal of Gandalf’s who scarcely appears anywhere in Tolkien (and not at all in “The Hobbit”), played here by Sylvester McCoy as a senile hippie-Santa type with bird poop in his hair and a wooden sleigh pulled by bunny rabbits. (Oh, you think I am kidding. You pray I am kidding.) There’s also an extremely boring meeting of the White Council – sorta the Joint Chiefs of Staff of Middle-earth – which brings back peevish elder wizard Saruman (Christopher Lee) along with elf king Elrond (Hugo Weaving) and smokin’ Elvish blonde Galadriel (Cate Blanchett), who can communicate psychically with Gandalf so we don’t have to listen to Saruman blabbing on. This happens in, like, the conference room at Rivendell, which in the blazing hi-def digital photography of Andrew Lesnie looks more than ever like the food court at a fancy architect-designed mall in Abu Dhabi.

There are two essential problems with Jackson’s “The Hobbit.” No, make that two and a half, or three. Some people will probably love the crystalline, hard-edged video look and intense iridescent yellow-green of these images, while others (like me) will find it distracting. Either way it’s a peculiar fit with Tolkien’s antique, storybook world, and makes the massively expensive sets and special effects look more synthetic and futuristic than anything in “Cloud Atlas.” It also underlines everything about the movie that feels misguided, from the Radagast and Dol Guldur miscues to the over-leisurely pace and the fact that the entire story about dwarf lord Thorin Oakinshield (Richard Armitage) and his tiny band trying to get their mountain kingdom back from Smaug – which is, you know, the actual plot of “The Hobbit” – feels like an enormous MacGuffin, a nearly irrelevant backdrop for the real story about Bilbo and Gandalf and the Ring and Gollum and Sauron and so on.

What those things add up to, at least at times, is a mishmash of tones that makes “The Hobbit” feel poorly conceived or not quite finished. To the extent that Jackson tries to strike a lighter and more jovial mood than in “LOTR,” as in the endless domestic drollery of the opening scenes, when Bilbo’s adorable underground cottage is invaded by hungry dwarves, his story disappears into terminal cuteness and he loses the spirit of gathering darkness he seems to want. When he ramps up the threat level, as in a series of cartoonish but violent chase-and-fight scenes late in the film, he abandons any connection to the rather gentle tone of Tolkien’s original. (Everybody’s kids are different, but I wouldn’t even consider taking my 8-year-olds, who loved the book, to this movie.)

Freeman makes an appealing Bilbo, once the movie gives him a chance to be something beyond a pipe-smoking fuddy-duddy, and McKellen gives a nicely understated performance in his return to Gandalf, who the hobbits believe is nothing more than an eccentric wanderer who can conjure up good fireworks. The state-of-the-art digital effects are often dazzling, but just as often appear to have swallowed the entire movie in fatal goofiness, as with the scene of battling Stone Giants that reminded me, more than anything else, of the craptastic kids’ toy Rock ‘em Sock ‘em Robots.

Look, I understand why kazillions of people can’t wait to see “The Hobbit,” because it’s the same reason I couldn’t. Whatever else it is, this movie is a massively impressive technical achievement and a coda to a genuine cinematic landmark. There’s no reason not to hope that future installments will be better, and I’ll give this one another shot (in 2-D, and at a more normal frame rate) somewhere down the road. All the jokes I came up with about how Jackson hasn’t just jumped the shark, but has dressed it up in dolly clothes and walked it around the block in a fancy English pram -- those are a bit too harsh. But I’m afraid that whoever it was in the New York Film Critics Circle who voted for “The Hobbit” as best animated film had a point. And so did the people who suspected that this whole thing was a bad idea.