Pithy takeaways and observations on the best shows this week 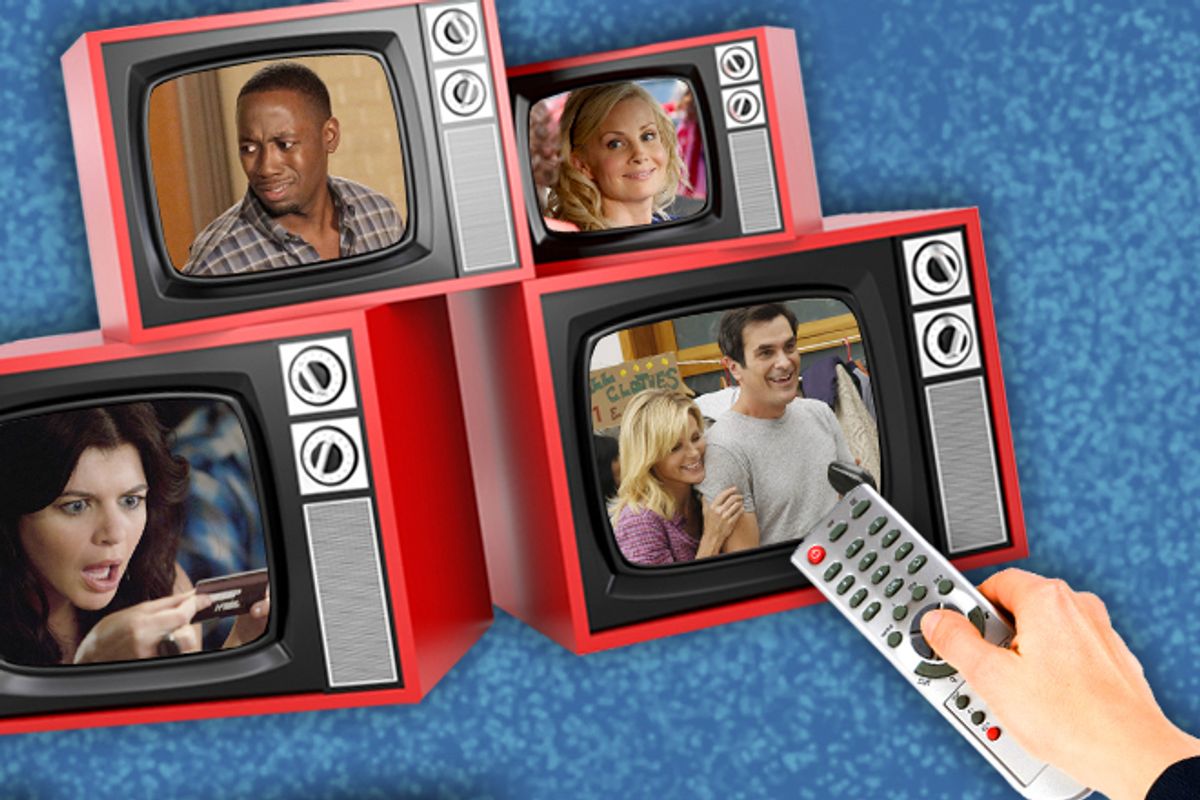 Observations about the past week of TV that are too short to stand on their own and too long to keep to myself.

1. Great moments in product placement ("great" moments): On “Parenthood,” cancer-stricken Kristina (Monica Potter) recorded a video for her children so the "Parenthood" audience could cry more. Her husband, Adam, watched said video on his Mac, which got major pride of place. A crowded Apple dock was visible for most of it and Adam very notably used the volume button as he settled in to watch. Macs, with volume functionality! Also the perfect computer to use when assembling your “If I die, know that I loved you” speech!

2. For a change this week, "Modern Family" decided to put the shrewish, dream-crushing shoe on Phil, not Claire Dunphy. Claire wanted to buy a house to flip it, Phil thought it was too risky, but didn't want to be the one to say no, and had to go through all sorts of contortions to play the part Claire usually plays. It was a nice role reversal — Oh, look, Phil can be an adult sometimes! — and one that suggests "Modern Family" doesn't always have to make Claire the shrew to structurally work.

3. "Glee" finally did a Hanukkah song in its annual Christmas episode (this one called "Glee" actually). It involved the Puckerman brothers strumming guitars around an L.A. studio lot and singing "Hanukkah, Oh Hanukkah" and was sufficiently mortifying to hope "Glee" sticks with Christmas jams from here on out. Best of all (worst of all), this particular Hanukkah song montage ended with Puck getting a tattoo of a Jewish star, so his Bubbe can totally plotz that he can't be buried in a Jewish cemetery when he dies.

4. "New Girl's" writers are yet again — but much more seriously than ever before — in the midst of a "We Must Make Winston Work Goddammit" phase. In an attempt to crack the code on the show's least coherent, least funny roommate, the writers have been pairing Winston with Jess, and giving him crazy things to do. Last week, this resulted in him flailing around on the floor in wintergreen briefs, this week in him screaming about the cranberry stuck in his ear. He doesn't quite make sense yet, but this is better than him being the boring roommate.

5. "Scandal" remains the most not-great show on television I wish more people were watching just because talking about it is so much fun. This week, everyone who is evil had a dripping Southern accent. There were two graphic and protracted sex scenes between couples you don't want to watch have protracted TV-sex that badly. The gay chief-of-staff tried to keep his journalist husband from further investigating voter fraud by finding him a baby to adopt, probably the first time gay adoption has been used as a straight-up bribe. And we now officially know that President Fitzgerald Grant, currently shot up in a hospital bed, didn't know his staff conspired to steal the election on his behalf, which somehow means "He's a patriot and he's legitimate." A happy ending on "Scandal" would probably be Grant resigning so he can be with Olivia anyway, but I don't see how that story line can go on for more than one or two more seasons.

6. This is actually from last week, but I have been thinking (and laughing about it) almost non-stop since. On "Scandal," in a flashback, we saw how emotionally disturbed, former-assassin Huck came to work for Olivia Pope, and learned that when she hired him, he looked like a giant, furry Muppet. Meanwhile, on "Happy Endings," Penny Harts tried to avoid telling her new boyfriend that she had to wear a helmet all the time by donning a helmet wig. And, lo, it was revealed when Olivia hired Huck, he too had also been wearing a helmet wig. Look.